You are here: Home » News » Global Governance/Beast System » Project Blue Beam – False Alien Invasion + Projections in Sky of Religious Figures with Call to Unite Under One World Religion Led By The Antichrist 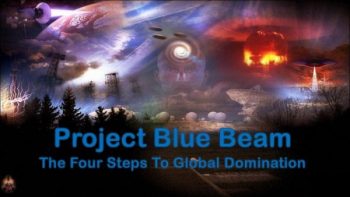 Source Article For Information Below.

“Project Blue Beam is not a specific objective, rather a four step process toward the objective. The objective is to utilize the technology, soon to be released archeology information in order to pull humankind toward a one world government, religion. Those not desiring to be a part of it, will ultimately be removed.

The Bible refers to a strong delusion coming. This delusion will be so intense many will believe.

And for this cause God shall send them strong delusion, that they should believe a lie. 2 Thessalonians 2:1

We see through media the push of alien visitation is coming. I [He] suspect [s] this is part of the delusion. Holographic imagery in the skies, revealing ancient technology pushing mankind came from seeding the planet, while removing all religions or combining it to one consensus are all part of the project….

These four stages (steps) are as follows:

Biblically we are informed there will be many earthquakes in diverse places.

And great earthquakes shall be in divers places, and famines, and pestilences; and fearful sights and great signs shall there be from heaven.  Luke 21:11

According to Newsweek, ”’there was a 25 to 30 percent increase in the number of significant earthquakes associated with a slowdown in the Earth’s rotation. ” We see this increase on the news every day. While the article conveys the reasoning due to Earth rotation slowing down, we cannot ignore the continuing fracking and underground building going on as well. Regardless of reasoning, the fact remains we see this incident continuing to rise.

There are some believing the governments are working on technology causing these earthquakes. This is done, not by fracking, rather as a weapon or control.

In 2017, an article indicates humans through an experimental geothermal plant caused the second-worst earthquake in history. This occurred in South Korea. By pushing thousands of gallons of water beneath the Earth’s surface, pulling the heat to convert into electricity, the resulting by-product is earthquakes.

And just like fracking, geothermal injection plants can trigger earthquakes. A geothermal plant in Switzerland caused a 3.4 magnitude earthquake in 2006, mirroring the increase in earthquakes around fracking regions in the U.S. in recent years. No matter the reason, pumping all that water into the earth can destabilize the crust and make it easier for tectonic plates to slip. The result is earthquakes, and sometimes very severe ones.

This first stage in the Project Blue Beam is to unearth archeological findings. These findings will uncover a false truth to diminish or reduce all religions into one world religion. The findings will point to a ‘hidden truth’, for the sake of removing Christianity and merging all religions into one world religion. Currently, archeology is proving the validity of Christianity. However, there will be a change to invalidate it.

Thereby using Earthquakes, the first step will be uncovering a story to push the one-world religion. I [He] have [has] already shown how some ancient technology is known through my [his] article on Hoysaleswara.

Holographic Images in the Clouds

Admittedly, this part of the whole project is where I [he] initially started in the research.

Currently, companies are pushing three-dimensional holographic technology. This coupled with augmented reality, there will be a holographic show in the clouds so real, people will mistake it for reality.

A hologram is defined as a three-dimensional image reproduced from a pattern of interference produced by a split coherent beam of radiation (such as a laser) . As far back as 2010, three-dimensional holograms were announced publicly.

Augmented reality is defined as an enhanced version of reality created by the use of technology to overlay digital information on an image of something being viewed through a device. You see this technology primarily through your smartphones, via games like Pokemon GO, Ingress, and others.

The holographic display in the clouds has already been seen to an extent. While news media calls it a ‘mirage’, some sightings are simply not mirages. These are possible test for the ultimate show.

The above video discusses holographic images seen in the clouds.

The above video shows the Space X craft causing odd blue lighting while in motion.

The point is this second step will provide a holographic moving image to either portray a message, or false attacks on the world.

This artificial method is done through advanced technology. The idea is to push communication to the individual only, without external sound waves.

This technology already exists and has been used through commercialization or movie magic for the most part. In order to have this technology on a wide scale, 5G will be required as a backbone. Read my [his] article on 5G for more information on that topic.

Hyper Sonic sound is the ability to send beams to the individual’s skull to stimulate the inner ear, converting it to sound. This method allows one to direct their message to the individual or group targets. The target will be the only one hearing the message.

On a much larger scale this technical ‘telepathy’ will be harnessed to provide individual messages or pain to the target. You can see how certain individuals will be fooled and manipulated, due to believing the higher intelligence speaking to only the chosen few.

We already see this occurring through the Ghost Chaser type documentary shows. The use of EMF meters, ghost hunting kits, and other technological devices for the purpose of listening or viewing intra-dimensional entities…

This fourth stage provides the means for intra-dimensional beings to easily communicate, interact with those on the Earth. I [He] suspect[s] CERN will also play a role in this. Anthony Patch discusses this topic extensively.”

Additional details about the Canadian journalist, Serge Monast, who revealed the details of these plans along with many more details can be found here. The excerpt below describing the last stage/step is from this webpage.

One is to make mankind believe that an alien (off-world) invasion is about to occur at every major city on earth in order to provoke each major nation to use its nuclear weapons in order to strike back. This way, the United Nations Court will require that all those nations which launched nuclear weapons to disarm when the invasion is shown to have been false. And how will the United Nations know that the invasion was false? They will have staged it, of course.

The second is to make the Christians believe that the Rapture is going to occur with the supposed divine intervention of an alien (off-world) civilization coming to rescue earthlings from a savage and merciless demon. Its goal will be to dispose of all significant opposition to the implementation of the New World Order in one major stroke, actually within hours of the beginning of the sky show!

The third orientation in the fourth step is a mixture of electronic and supernatural forces. The waves used at that time will allow ‘supernatural forces’ to travel through optical fibers, coaxial cables (TV) electrical and phone lines in order to penetrate to everyone at once through major appliances.  Embedded chips will already be in place. The goal of this deals with global Satanic ghosts projected all around the world in order to push all populations to the edge of hysteria and madness, to drown them into a wave of suicide, murder and permanent psychological disorders. After the Night of the Thousand Stars, worldwide populations will be ready for the new messiah to re-establish order and peace at any cost, even at the cost of abdication of freedom.”

Note from Expat Gal – Please keep in mind that many of these resources are anywhere from a few to 26 years old. Technology and what can be done using technology has increased exponentially.  Project Blue Beam will FEEL REAL as experienced using your 5 senses.  I believe we will only know the entire experience is fake by confirming it with God when it is actually occurring.  People relying on THEIR own understanding will not be able to discern that the entire experience is fake.  Having advance knowledge of this devious plan will help us to prepare & possibly have a higher likelihood of recognizing the deception as it occurs.

We are in the final steps before the Antichrist/Beast System is forced upon us.

Pray daily for discernment for yourself & your loved ones. Be an independent thinker. Follow God’s Word & leading above all else or you will fall to the Beast System.

Matthew 24:24, King James Version
For there shall arise false Christs, and false prophets, and shall shew great signs and wonders; insomuch that, if it were possible, they shall deceive the very elect.
At this point in time, if you are diverging from the masses, it is highly likely that you are following God & not man & specifically not Satan.

Stand strong my Brothers & Sisters! Given the increase in alien news articles, offerings in entertainment, etc., these trends clearly indicate to me that Project Blue Beam will likely be USED on the masses to DECEIVE & MISLEAD them as early as 2021.

This will likely be the most challenging year of our lives as censorship increases, food shortages become more prevalent, economies default, tyrannical measures by government increase, the “vaccine” is rolled out globally & those shunning it will be vilified ruthlessly by the media, UN, World Economic Forum, World Health Organization & leaders of the rising Antichrist/Beast System.

Prepare yourselves – spiritually, mentally & physically for the battle. Division among people will continue to occur at an accelerating rate. Ask God to show you whom you can trust and to help you find TRUTH in times of massive propaganda & manipulation.

Thank you Expat Gal for all the work you do. I read and watch your post.

You are very welcome Larry. 🙂. Hope your New Year is off to a great start!

Thank you for this article. I can’t imagine how difficult it will be the keep a sound mind during bombardment of this nature without the covering of Jesus Christ our Savior and Lord. His shelter is our only hope.

Just one example of the continual & at times, downright ridiculous, propaganda being done to the masses globally in an effort to create fear & give credence to “aliens” which are actually demons, principalities & the fallen ones. “ INVADING ALIENS Nasa urged to hunt down alien probes with fleet of spaceships by Harvard space genius”.

thanks for all your time and effort