You are here: Home » News » Israel and Middle East News » President Trump: “We can’t allow this to continue” 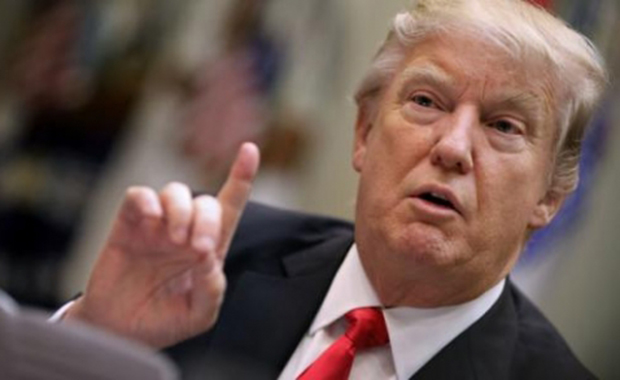 More recently, the Lord seems to be giving Sharlene visions related to her previous visions, such as visions 55 and 56.

I saw myself once again walking down the stairs from below in the expanse area. The staircase was large and white. I think I could put at least 5 of me across one step. As I was watching myself walk down the steps, I noticed an angel standing on top of the stairs. He had golden armor on with some red, maybe a red belt? (I asked my cousin about him and she said the red is part of his breast plate and is shaped like a diamond. Cool!) His hair was dark. His wings were folded behind him, but the tips of them stuck up far above his head.

I greeted my friend and walked the short path to the vision area where all the others were gathered. They were all wearing white robes. I stayed in the back with my friend and the vision opened up to smoke from a battle. I saw missiles flying in the air from left to right from ships in a sea and missiles flying from right to left as if they were firing at each other.

There was a man filling the right corner of the screen. I remembered him from vision #10. He had short black dark hair, a dark mustache and a short dark beard, but I saw mostly his thick dark mustache. I’ve seen him in a past vision regarding an attack on Israel as he was the military figure that stuck his head out of a military tank. He was some kind of military commander.

I saw through the smoke that the ground was hilly. There was light colored rock and it was sandy and dusty. I saw a map of the Middle-East and there are black arrows that coming from the west towards Israel and arrows going east from Iran/Syria towards Israel. It seemed Israel was caught in the cross fire. There was a lot of smoke, but I didn’t sense a lot of destruction.

The picture changed and I saw President Trump standing on my left wearing a suit, but I couldn’t see who he was talking to. He was moving his hand while he was talking; pointing with his index finger and saying “We can’t allow this to continue.”

Then I saw pictures of Putin and the president of Iran, Hassan Rouhani. That was all I saw. Jesus didn’t confirm when this will happen or if there’s more.

I walked down the staircase from the Throne room on my regular path. Jesus was standing beside me at the top of the stairs. I have looked at Him from the bottom of the stairs at a distance from where I have often stood in the expanse when I saw things around me. It was Jesus this time and not the angel. I greeted my friend and we walked a little closer to the vision area and looked at the screen.

It opened up showing a large military tank in front of me moving to my left. The landscape was the same as I saw in the previous vision #55 where it was rocky, hilly and light colored rocks with sand. I didn’t see any trees. I noticed there were other tanks in the background as well, all moving in the same direction. They were navigating the rocky land. It looked like an army.

Then I noticed that same man again whom I saw in the previous vision as well in vision #10- the man with thick black hair and a black mustache with a very short black beard. He was wearing a green military uniform like the picture I recently found with the military cap, but the picture was not of the same man, just the same uniform I saw in my vision. He was leading in the front military tank.

I looked up and I saw fighter jets in the sky moving from my right to my left in a V-formation. I was too far away to recognize where they were from. Then I was in the air with a view from a jet fighter. I saw the lush land of Israel below me. I saw the Sea of Galilee and the Dead Sea further south. I looked to my right and saw an army coming from the north over land. They were proceeding to Israel as well.

Then suddenly, there was a flash as the entire screen lit up bright for a few seconds, allowing me to see only for a moment. It came from my left. I didn’t see where it came or from or what caused it. Jesus didn’t confirm that with me. That’s all I was shown. Jesus did confirm that these nations coming at Israel were Iran and Russia, but He didn’t confirm yes or no to any other nations.

It’s my understanding that Jesus wants me to write just the facts now and not my interpretation unless Jesus gives it to me. If He chooses not to confirm something with me it’s because He wants people to just take it as it is. He wants people to stop assuming and making up their own interpretations which might bias the reader, giving a false interpretation. I’m not quite understanding this directive, but I will be obedient and do as He has asked. There is a reason for everything He does even if I don’t understand it. I know and see in part. Thanks.

Thanks so much for your 2 very recent visions. It makes perfect sense that the Lord would want you to not interject your own interpretation. I’m struck way too many times when reading article on here that the author’s almost always interject their own interpretations. We don’t know why the Lord is showing us what He is. I so appreciate reading JUST about the vision – leaving me to ponder on my own what it may or may not mean. He shows us what He wants us to see.

Very interesting that Lois Vogel Sharp was also instructed to withhold an interpretation from the word that she received yesterday…
https://youtu.be/U5JiTrs0QQk

Amen to that, Charles! I think sometimes these are for those left behind and God is leaving breadcrumbs so they go to HIM for answers once they see that these visions do come to pass in their time, and they are true witnesses to His speaking to His people.

Agreed. I do believe these ‘bread crumb trails’ are for a plan and purpose. Also, many who are drawn to read these(prophetic words) as those of us on here are speaking to our friends, family and neighbors will be drawn out from their comfortable existence as the signs and wonders (and disasters) around us keep increasing in frequency and intensity.
” So we are convinced that every detail of our lives is continually woven together to fit into God’s perfect plan of bringing good into our lives, for we are his lovers who have been called to fulfill his designed purpose.” (Romans 8:28. The Passion Translation)