You are here: Home » Babylon » 1st Beast is Obama » President Obama Ramping Up Persecution of Christians in U.S. Military
Share this post: 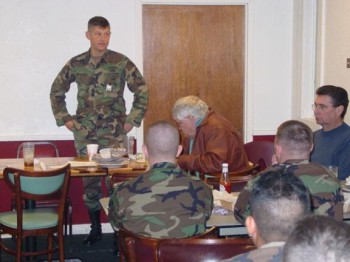 Americans should have seen this coming, because it was displayed publicly and openly years ago. Today we are paying for the spiritual blindness of millions of people who voted for Barack Obama as President.

Even before he became President, in June 2007 Senator Obama made a clear break with America’s Christian heritage when he declared publicly:

“Whatever we once were, we’re no longer a Christian nation. At least not just. We are also a Jewish nation, a Muslim nation, and a Buddhist nation, and a Hindu nation, and a nation of nonbelievers. Somehow, somewhere along the way, faith stopped being used to bring us together and started being used to drive us apart. It got hijacked. Part of it’s because of the so-called leaders of the Christian Right, who’ve been all too eager to exploit what divides us.” (Source: wnd.com)

As it turns out, the one who was dividing our country was not Christians. It was President Obama. In an amazing display of hypocrisy he was doing the very thing he was accusing Christians of doing. After promising to unite our country, he has divided us at every opportunity including left against right, rich against poor, black against white, government against the people, and even Christians against Christians. Our country has not been this divided since the Civil War. President Obama has brought us to the brink of another Civil War.

President Obama’s anti-Christian bigotry has now infiltrated all levels of his administration, including the U.S. military where our soldiers are being indoctrinated with a steady diet of anti-Christian hatred. The attacks on Christians are ramping up. Soldiers are being threatened with punishment for donating to any evangelical Christian organizations, which is a flagrant violation of their Constitutional rights.

Here is the story reported from Fort Hood just last week on October 17.

Soldiers attending a pre-deployment briefing at Fort Hood say they were told that evangelical Christians and members of the Tea Party were a threat to the nation and that any soldier donating to those groups would be subjected to punishment under the Uniform Code of Military Justice.

A soldier who attended the Oct. 17th briefing told me the counter-intelligence agent in charge of the meeting spent nearly a half hour discussing how evangelical Christians and groups like the American Family Association were “tearing the country apart.”

Michael Berry, an attorney with the Liberty Institute, is advising the soldier and has launched an investigation into the incident.

“On the very base that was the site of mass murder carried out by a radicalized Muslim soldier, it is astonishing that it is evangelical groups that are being identified as a ‘threat.’”

“The American public should be outraged that the U.S. Army is teaching our troops that evangelical Christians and Tea Party members are enemies of America, and that they can be punished for supporting or participating in those groups,” said Berry, a former Marine Corps JAG officer.

“These statements about evangelicals being domestic enemies are a serious charge.”

The soldier told me he fears reprisals and asked not to be identified. He said there was a blanket statement that donating to any groups that were considered a threat to the military and government was punishable under military regulations.

“My first concern was if I was going to be in trouble going to church,” the evangelical Christian soldier told me. “Can I tithe? Can I donate to Christian charities? What if I donate to a politician who is a part of the Tea Party movement?”

“I was very shocked and couldn’t believe what I was hearing,” the soldier said. “I felt like my religious liberties, that I risk my life and sacrifice time away from family to fight for, were being taken away.”

And while a large portion of the briefing dealt with the threat evangelicals and the Tea Party pose to the nation, barely a word was said about Islamic extremism, the soldier said.

“Our community is still healing from the act of terrorism brought on by Nidal Hasan – who really is a terrorist,” the soldier said. “This is a slap in the face. “The military is supposed to defend freedom and to classify the vast majority of the military that claim to be Christian as terrorists is sick.”

Tony Perkins, president of the Family Research Council, tells me the Pentagon is pushing anti-Christian propaganda.

“On the very base that was the site of mass murder carried out by a radicalized Muslim soldier, it is astonishing that it is evangelical groups that are being identified as a ‘threat,’” he said. “Defense Secretary Chuck Hagel must immediately intervene to stop this march against the rights and freedom of our soldiers.”

The soldier said they were also told that the pro-life movement is another example of “radicalization.”

“They said that evangelical Christians protesting abortions are the mobilization stage and that leads to the bombing of abortion clinics,” he said, recalling the discussion.

An Army spokesman at the Pentagon tells me they do not maintain or publish a list of organizations considered extremist.

“None of these slides [shown at the briefing] were produced by the Army, but by soldiers who included information found during an Internet search,” the spokesman said.

He said commanders and other leaders were cautioned that they should not use “lists of extremists, hate groups, radical factions or the like compiled by any outside non-governmental groups or organizations for briefings, command presentations, or as a short cut to determining if a group or activity is considered to be extremist.”

Meanwhile, the public affairs office at Fort Hood is denying the soldiers’ allegations.

“The allegations you are asking about were brought to the attention of the Fort Hood leadership immediately and a (sic) inquiry is occurring,” read a statement from Tom Rheinlander, the public affairs director at Fort Hood. “At this time, initial information gathered about the training and what you claim occurred is not substantiated by unit leadership and soldiers present at this training venue.”

I sent the public affairs officer additional questions about the specific content of the briefing but he declined to respond.

But this is not the first time an Army briefing has labeled evangelicals as extremists. Last April an Army Reserve briefing classified Evangelical Christianity and Catholicism as “religious extremism.”

In a letter to Rep. Doug Lamborn (R-Colo.), Secretary of the Army John McHugh said the briefing in April was an isolated incident and the material used was not sanctioned by the Army.
McHugh said it was a “misguided attempt to explain that extremism is not limited to a single religion.”

Two weeks ago, several dozen active duty troops at Camp Shelby in Mississippi, were told the American Family Association, a well-respected Christian ministry, should be classified as a domestic hate group because it advocates for traditional family values.

Again, the military called it an isolated incident with a trainer using material that was not sanctioned by the military.

That explanation is wearing thin with American Christians.

“How much longer can the Army claim no knowledge or responsibility for these things?” Berry asked.

“These repeated incidents show either that this training was directed from Army leadership at the Pentagon, or else the Army has a real discipline and leadership problem on its hands because a bunch of rogue soldiers are teaching this nonsense.”

The most recent allegations at Fort Hood have drawn sharp rebuke from religious liberty groups around the nation.

“Why is the Army engaged in these anti-Christian training propaganda briefings?” asked Perkins, himself a veteran of the Marine Corps. “The only explanation is that this is a deliberate effort of the Obama administration to intimidate and separate soldiers from Christian groups that they support and that support them.”

“Far from mere ‘isolated incidents,’ as the Army has dismissed previous occurrences, this latest incident demonstrates a pattern and practice of Army briefings identifying mainstream religions, such as Evangelical Christianity, Judaism, and Catholicism, as examples of ‘religious extremism’ similar to Al Qaeda, Hamas and the Ku Klux Klan,” he told me.

Perkins said it’s time for the Pentagon to “ensure that instructors carry out their role to train our troops to defend our freedom, and not push anti-Christian propaganda.” (Source: Fox News)

Amazingly, many Christians, including Christian leaders, are blindly supporting this anti-Christian President even as he tightens the noose around their necks. Do we have to wait until we are rounded up and sent to concentration camps before we realize what is happening to our country? The silence of Christian voices is deafening.