You are here: Home » Babylon » Mark of the Beast » “Trust Stamp” Vaccine Record and Payment System (Precursor to MOB) & Trump’s Role in Vaccinating the Masses
Share this post: 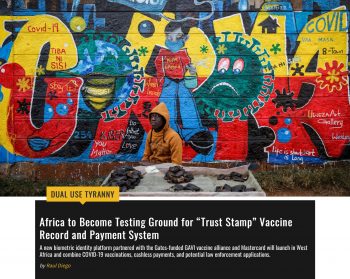 “A biometric digital identity platform that ‘evolves just as you evolve’ is set to be introduced in ‘low-income, remote communities’ in West Africa thanks to a public-private partnership between the Bill Gates-backed GAVI vaccine alliance, Mastercard and the AI-powered ‘identity authentication’ company, Trust Stamp.

The program, which was first launched in late 2018, will see Trust Stamp’s digital identity platform integrated into the GAVI-Mastercard ‘Wellness Pass’, a digital vaccination record and identity system that is also linked to Mastercard’s click-to-play system that powered by its AI and machine learning technology called NuData. Mastercard, in addition to professing its commitment to promoting ‘centralized record keeping of childhood immunization’ also describes itself as a leader toward a ‘World Beyond Cash’, and its partnership with GAVI marks a novel approach towards linking a biometric digital identity system, vaccination records, and a payment system into a single cohesive platform. The effort, since its launch nearly two years ago, has been funded via $3.8 million in GAVI donor funds in addition to a matched donation of the same amount by the Bill and Melinda Gates Foundation.

In early June, GAVI reported that Mastercard’s Wellness Pass program would be adapted in response to the coronavirus (COVID-19) pandemic. Around a month later, Mastercard announced that Trust Stamp’s biometric identity platform would be integrated into Wellness Pass as Trust Stamp’s system is capable of providing biometric identity in areas of the world lacking internet access or cellular connectivity and also does not require knowledge of an individual’s legal name or identity to function. The Wellness Program involving GAVI, Mastercard, and Trust Stamp will soon be launched in West Africa and will be coupled with a Covid-19 vaccination program once a vaccine becomes available.”

Youtube Channel, American Vagabond, shows in a recent video or if you just wish to read the article that while President Trump made a splash in the media with his announcement to withdraw the U.S. from the WHO, he had pledged close to $2 Billion to Gates-backed GAVI.

At the 22:36 minute mark in the video, “In early June, the Trump Administration declared support for GAVI to the tune of a $1.16 billion USD donation.”.

At the 27:22 minute mark in the video, “It was actually USAID who first announced the pledge of U.S. $1.16 billion in February. The Trump Administration made that $1.16 billion commitment as part of the budget for Fiscal Years 2020-2023. The budget for Fiscal Year 2021 included $290 million for GAVI. Remember that the records from fiscal year 2018 show an estimated $281.6 million to the WHO from the US. The Trump administration’s announcement of an initial $290 million investment easily surpassed the US investment in the WHO. Over the next three years the US will give more than $800 million to GAVI for their vaccination programs.“

For those people who still are caught in the Hegelian Dialect, it is important to see that Trump is ADVANCING the Beast System in multiple ways.

1) This significant financial donation to Gates-backed Gavi
2) Trump’s push for biometric ID2020
3) Trump’s fast-tracking of the vaccine for the U.S. population
4) Trump’s decision to involve the military in “vaccine injections” to reach massive numbers of people with an authoritative component from the military personnel that will be involved.

mark Fritts, even if voluntary–they will say, you cant go outside, buy/sell, work travel unless you voluntarily do this. Expat girl, in all you substantial research have you found any place on this planet where there is freedom and leaders havent been bought off by bill gates? Some time ago some prophet said in last days there would be sheep and goat nations but they seem all goat–I haven’t found any sheep nations.

Hi Von – Great question & honestly, gives me an idea for a future article if I can find any kind of data to answer this question accurately.

My mind immediately went to global “freedom ratings” – press, economic, human freedom defined as a combined score of personal, economic & human (Pgs. 8-12 in the report). However, if I look through this list, the global governance goals seem to be rapidly advancing even in ones at the tops of these lists!

Then I had the thought that to answer this question, search out countries that are NOT part of the United Nations. There are only 2 countries – Vatican City (Holy See) and Palestine. They can participate as permanent observers of the General Assembly and are provided access to UN documents. Separately States Without UN Non-member Observer Status (like Vatican City & Palestine) which are recognized as independent states by some of the U.N.’s members include Kosovo, Western Sahara, Taiwan, South Ossetia, Abkhazia & Northern Cyprus. So these countries are likely to be the most insulated from the Plans of Bill Gates & Bought & Paid for Politicians. However Cyprus may not be a great option as the IMF is active in that nation since the country suffered financial default.

I will keep researching this topic & see if I can make a post as I am sure this is a topic of interest to many. I was surprised that some of the countries I might have deemed as “most free”, actually were incredibly totalitarian during the lock down, like Spain & Portugal & strangely enough, the British Virgin Islands. ?

We need to call our senators, and congressmen and have them make this a voluntary vaccine with no repercussions.
This needs to go to the Supreme Court if necessary.
The military should have no involvement in this at all.
Ask the Father to give us wisdom
on how to deal with this.

It will be voluntary with Food as a weapon against you..