You are here: Home » News » Jesuit Agendas » National Security News » “The plans for the North Korean war have now been finalized and approved by the king.”
Share this post: 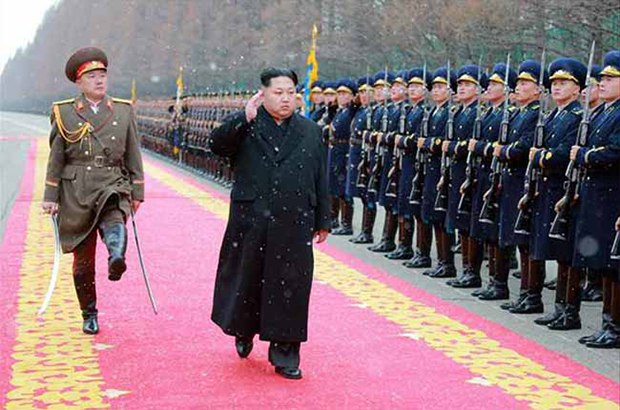 My son, write these words I speak to you for they are for My body. Many chaotic things are days away, and My body has no idea for they are blinded to this world and only focus on the fleshly thoughts given by false prophets. My body does not see the murder of 60 million babies, and those that do see, do nothing because they feel – why bother, I am just one person. Peter was just one person, and he conquered the world for My sake.

My son, this body in America has no idea what awaits in the darkest crevasses of men’s hearts, the death and destruction that is coming, and yet they ignore My true prophets and watchmen that are sounding the alarms. My body is so sin-ridden, I can only move among My remnant who are daily seeking My face. Time is now here that My body will look up in terror and fear and seek out the remnant who are not in fear, for I have told them what is coming.

My son, the plans for the North Korean war have now been finalized and approved by the king. After My servant’s body is placed in the ground, the war can start. War will erupt in Israel during this same time frame, as the enemies of Israel will be opposed to the embassy move. This will be a distraction to take the eyes of the world off of the true threat – Russia/Iran/Turkey. The Bear will be on the prowl because the Star and Eagle will appear to be strong after victorious battles. Beware the Bear, for he is strong and will surprise everyone!

My son, My remnant, hear this word! Proclaim repentance throughout this land! Pray for the souls who will perish, so many will perish! Reach the lost with My gospel! Shout out My words to an unbelieving body! There is not any time to hesitate! Prepare, for I will be coming soon! Get get your house in order! Rid yourself of all worldly idols! Seek Me now! Read My Word!

8 “You shall also say to this people, ‘Thus says the Lord, “Behold, I set before you the way of life and the way of death.
9 He who dwells in this city will die by the sword and by famine and by pestilence; but he who goes out and falls away to the Chaldeans who are besieging you will live, and he will have his own life as booty.
10 For I have set My face against this city for harm and not for good,” declares the Lord. “It will be given into the hand of the king of Babylon and he will burn it with fire.”’ (Jeremiah 21:8-10)

There is news circulating in China that NK leader has taken the train visit Beijing in the afternoon March 26 Beijing time. ( not confirmed)

Benjamin Baruch & J.R. Nyquist have written a book titled “GLOBAL TACTICS OF WW 111″ ….which perfectly lays out all the details of what is coming & happening…they co wrote this book yrs ago..the red horse of war is riding…Just watched a video ( you tube By Rick Wiles Tru News..news report.) this am titled” Are You Prepared For World War in the next 90 days?.”….some saw war coming in the Fall of 2018 …high probability anywhere between 2018-2019 ..This current video says could be April/ May window.

Last Sunday the Holy Spirit clearly brought to mind Malachi 4:2 “But for you who revere my name, the sun of righteousness will rise with healing in its rays. And you will go out and frolic like well-fed calves.” Electrifying when read in context:

Malachi 4:1: “Surely the day is coming; it will burn like a furnace. All the arrogant and every evildoer will be stubble, and the day that is coming will set them on fire,” says the Lord Almighty. “Not a root or a branch will be left to them.”

I sense this word about cannot be changed even with prayer. However for anyone who truly reveres/fears God’s name the day of burning and darkness will be a day of healing and even frolic. Can’t comprehend it but God’s Word declares it to be so.

Nevertheless, your admonition Byron is received- I will continue to boldly speak the gospel of Jesus NOW to anyone who will listen.

I loathe Senator Lindsey Graham but a timely article.

Is this war a trap for President Trump.
http://holyspiritwind.net/2018/02/20/i-tell-you-this-day-donald-trump-is-also-as-belshazzar-for-he-is-the-last-king-of-babylon-america/#more-780

What Bryon says lines up with what Chuck Youngbrandt & Duduman were shown . Things will happen / change quickly once the war in Israel starts . Consider GODs signs from when this pope took office , lighting hitting the Vatican twice , the dove of peace being killed and eaten by a seagull , the meteors for the next week with the biggest one exploding over Russia . Then we had the Blood moons , the eclipses , then last fall the Sign of the Woman giving birth , Israel will be 70 on May 18th 2018 , Israel will be 77 on may 18th 2025 . We have had the increase in EQs & volcanoes on the ring of fire . The Nations appear to be lined up as spoken of in the Word , if these are the Signs we were told to watch for , Prepare Ye the way of the LORD , for it will be upon us very soon . I believe war in Israel will probably star very shortly after May 18th and We all will be in the Time of the Written word being fulfilled . Safety will only be found in JESUS , grab hold of HIS Robe and don’t let go . Blessings & Prayers !

TRUE WORD I believe. No one wants war in the USA. This is a sad word in many ways, but it’s time Americans faced reality. We have become a nation of people with their heads stuck in the sand. Look up people, look up. The SIGNS from Almighty God are all around us. The days of false prophets have come to an end.

I must be careful with the following words, but it’s past time we stop making IDOLS of men, and that includes Billy Graham. If Christians would search Billy’s history, they would find some sad surprises. Our focus must be on JESUS CHRIST. We must be lead by His Holy Spirit. Last night I had a dream, very powerful, and I usually never believe in dreams. It was a truth for me which God revealed. Yes, to each of us, the Lord is speaking if we listen to HIM.

The time of chastisement is coming to this prideful and sinful nation. And out of the suffering will arise the victors IN Christ Jesus. Hang on, hang on to HIS Hand Beloved; for only He can carry you though what’s soon coming upon America.
God Bless in Jesus Name.

Sister Linda I could not agree with you more . But let me say this about Billy Graham , he was a finite fallible man and GOD used him in spite of his flaws which were far fewer than my flaws . GOD has allowed me to harvest 50-60 souls in my life , Billy GOD used to harvest millions . You are correct we should not make an idol of any man , but it is not likely we will ever touch as many souls as Billy Graham did . Let us remember Romans 3 : 9-20 – There is none righteous , no , not one : & Isaiah 64 : 6 – But we are all as an unclean thing , and all our righteousness are as filthy rags ; There is only one WHO is perfect and WHO we should keep our eyes on . This does not take away from how GOD choose to use Bill Graham . King David was a man after GODs own heart , a murderer & adulterer . Blessings Sister Linda .

Big boy Floyd Cosmo and me

Also checkout this word about North Korea by Charlie Shamp. He said the Koreas would be reunited in 1 day!
https://www.youtube.com/watch?v=rX4im-2f3aA

Re timing, does anyone know when Billy Graham will be buried?–I think that is the servant prophecy refers to. Historically spring is always time for war those who wait too long, (i.e. Napoleon and Germany) have high probability of being defeated by the coming winter weather than the enemy.

On Friday, March 2nd, Billy Graham will be buried…

Rev Billy will be laid to rest this Friday March 2. So I suppose any time after that war can start. As you said Spring seems to be war time historically and there are so many special Hebrew dates in the Spring as well

War makes it convenient for the deep state to stage a false flag and blame it on North Koreans.