You are here: Home » News » Global Governance/Beast System » The Plan Revealed – A Permanent “Climate Lockdown” Because It Is Good For The Earth Contrasted With Scripture With Mankind Given Dominion Over The Earth 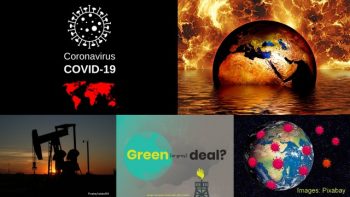 On the heels of another lockdown in Madrid, Spain affecting over 1 Million people, Christian (Youtube Channel – Ice Age Farmer) in his 10 minute video, discusses what many of us likely expected if you have read UN Agenda 2030 & the World Economic Forum’s oGreat Reset documents. The PLAN to put into place PERMANENT LOCKDOWNS (in perpetuity) under the guise of “It is good for the climate.”

“A ‘Climate Lockdown,’ to extend into perpetuity, reveals the true nature of #COVID1984: normalization of the police state, ‘climate tracing’ and now ‘climate lockdown’ as technocrats shove society towards their post-human future. Their hand is forced as the Global Warming narrative breaks down and the Modern Grand Solar Minimum goes mainstream. In their panic, they are seizing for total control — we are at a demarcation point: we either fight now, or forever lose the opportunity. Christian breaks it down on this Ice Age Farmer broadcast.”

The article, “Is a ‘Climate Lockdown’ Next?” discusses this shift. Not surprising as other “Global Warming” & “Climate Change” efforts have failed to yield the desired results by the Globalists where the masses demand society & our way of life is dramatically altered to “save the future of our world”.

“You knew they would try to pivot off the draconian COVID policies and use climate change as the pretext to deploy the same rigid controls over our lives. Now, perhaps a trial balloon is being floated for a ‘climate lockdown.’

The noxious idea is that we are at (yet another) tipping point, and that unless government radically seizes centralized control of the economy, it will be shutdown time. From, ‘Avoiding a Climate Lockdown,’ by Mariana Mazzucato, Founding Director of the Institute for Innovation and Public Purpose:

Under a ‘climate lockdown,’ governments would limit private-vehicle use, ban consumption of red meat, and impose extreme energy-saving measures, while fossil-fuel companies would have to stop drilling. To avoid such a scenario, we must overhaul our economic structures and do capitalism differently.

You can just imagine the authoritarianism Mazzucato proposes — meaning, it wouldn’t be capitalism at all. For example:

We need to reorient our energy system around renewable energy – the antidote to climate change and the key to making our economies energy-secure. We must therefore evict fossil-fuel interests and short-termism from business, finance, and politics. Financially powerful institutions such as banks and universities must divest from fossil-fuel companies. Until they do, a carbon-based economy will prevail.”

In the article, “Avoiding a climate lockdown”, there is an effort to CO-MINGLE Health, Economic & Climate “Crises” which is so the Elites, through the forecasted “The Great Reset” (link to the book if you wish to read about this plan), can assume control & power over every aspect of our lives! How are the Elites trying to force the masses to support “climate change” efforts? Through FEAR!

Most ridiculous of all, are the blatantly incorrect “forecasts” of excessive heat in the future when we have entered a global solar minimum that unless the Globalists create this excessive heat, we will actually experience lower temperatures due to less solar activity. However, I will save this topic for a future post. We must actively discern true “fake news” used by the Globalists who own the media companies to push their FALSE narratives on us as they plan for a post-human world! One where zero of God’s original creations (humans, animals, plants) will exist; only genetically-modified creations from Satan’s minions.

“Many think of the climate crisis as distinct from the health and economic crises caused by the pandemic. But the three crises — and their solutions — are interconnected.

COVID-19 is itself a consequence of environmental degradation… Moreover, climate change will exacerbate the social and economic problems highlighted by the pandemic. These include governments’ diminishing capacity to address public-health crises, the private sector’s limited ability to withstand sustained economic disruption and pervasive social inequality…

The climate crisis is also a public-health crisis. Global warming will cause drinking water to degrade and enable pollution-linked respiratory diseases to thrive. According to some projections, 3.5 billion people globally will live in unbearable heat by 2070.” (ABSOLUTELY FAKE & just outright ridiculous forecasts reminiscent of Al Gore’s preposterous Global Warming claims which NEVER came true but were magically forgotten by the media & many people.)…

We need to move quickly if we want to transform the future of work, transit, and energy use, and make the concept of a ‘green good life’ a reality for generations to come. One way or the other, radical change is inevitable: Our task is to ensure that we achieve the change we want — while we still have the choice.“. (Translation – Support the Elites’ power grab for control over ALL aspects of society & civilization because they know how to save our world from devastation & destruction under their “green policies” which shockingly make the Elites richer & more powerful & delegate the masses to an even lower status & power in the world where the needs of “climate” take precedent over the needs of “humans” which directly conflicts with Scripture specifically Genesis 1:26-28, KJV

26 And God said, Let us make man in our image, after our likeness: and let them have dominion over the fish of the sea, and over the fowl of the air, and over the cattle, and over all the earth, and over every creeping thing that creepeth upon the earth.

28 And God blessed them, and God said unto them, Be fruitful, and multiply, and replenish the earth, and subdue it: and have dominion over the fish of the sea, and over the fowl of the air, and over every living thing that moveth upon the earth.

Lest anyone think I do not care about the Earth. I do. I recycle, regularly clean up by the beach by my house, try to purchase products in the most environmental-friendly packaging, etc. but I clearly see the effort to change God’s plan which was humans having dominion over animals, plants, trees, etc. Not animals, plants, trees, etc. having dominion over humans! Be very clear to see these sneaky efforts by the Elite to change God’s plans for the world to ACHIEVE their objectives which are Satan’s – not God’s. Should humans take care of our world & everything in it? Absolutely! We understand that we are interconnected. However, nowhere in the Scripture shared above does God instruct us to forfeit the dominion of humans to the animals, plants or the “climate”.

Here is a post entitled, “What is the Significance of God Giving Mankind Dominion Over the Earth?” from Pastor Bill Laky whose view aligns with Scripture & my perspective which I have shared here.

“The picture that we have here is that humanity, uniquely (as compared to aardvarks or bumblebees), is placed in a leadership role over the earth. God rules man. Man rules the earth, and as mankind is subject to God, the world is subjugated to humanity…

Biblically, we refer to this idea as stewardship or management. God’s command to subdue the earth does not, necessarily, mean to “do whatever you want with it” as many have argued.

On the contrary, scholars have suggested that a more accurate translation of Adam being placed in the garden to work and to keep it might be to protect and to serve it.

This is to say that with the authority to rule comes the responsibility to rule well. We have the right to rule, but we do so under God…

We answer to him for how we rule. Subdue, which can also be translated as cultivate, implies caring.

Having dominion over animals and the earth alike should prompt within us responsibility. We should value them as a resource.

Our job is to represent God to the world, to care for his creation. When we abuse his creation, are we accurately reflecting him? I don’t think so…

The line, I think, that is crossed by some environmentalists is all about maintaining proper perspective. We are subject to God, and the earth is subject to us.

When we start valuing the earth over people or start elevating to the level of God, then I think we are treading on dangerous ground.“

The global elites, which I can no longer use capital letters for, are satan’s minion’s trying to pave a path for the antichrist. I stronger hope and pray the Church will rise from her slumber and begin to seek God, repent, confess and praise.

The longer she stays silent, the enemy of our souls has the opportunity to take more ground. It is despicable to see what is happening in the United States, though I know that when the Lord gives me to sign move on His behalf, I will.

We must seek Him, while He may be found, as in a short time, it may be too late. I stand with you, in support of what you share, and continue to share to all who seek Truth, and the author of it.

Be encouraged. We in the Z3 News community LOVE YOU and what you bring to the table.

Bless you and you family.

All the Churches are controlled by the Jesuits & Freemasons – Only Individual Christians have broken free of their control.!!!

Then I heard another voice calling from heaven, “Come away from her, my people. Do not take part in her sins, or you will be punished with her. Revelation 18:4