You are here: Home » Babylon » Antichrist » “The Person You Are Looking At Is the Antichrist” 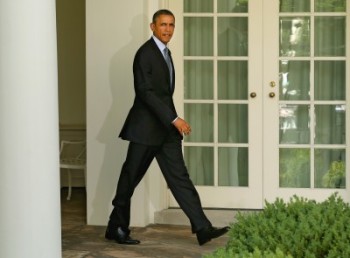 In June 2011, I had a dream. In this dream, I found myself in an open place in a compound, which looked like it was the White house compound in Washington, DC.

There were many people there, all well dressed in black suits. I was not able to recognize who they were. I could see them, but they could not see me as I was walking around inside the compound.

I was eventually able to move some distance where I was able to recognize one of the people there. It was USA president Barrack Obama. I was able to focus on his eyes from a distance. I was then made to understand in my heart through a powerful voice: “The person you are looking at is the antichrist, the man of lawlessness, the son of perdition”.

I then woke up from the dream. This was the first time ever that I was shown through a prophetic dream the identity of the man of lawlessness, the antichrist.

Obama has a huge job to do and it will be recognized soon what he really is. He is pretending to work for the dark side to finally bring the light to americans. There will also be no elections for the Americans as we know it has to be. It will be delayed and no one who is known in the media etc will be elected.

The revaluation of currencies will be very soon announced. New gold backed money system with Chinas Gold reserves – thats will be the big wealth transfer! No more slavery through money. We are becoming free more and more. And because of that wealth transfer there will also be no reason for a stock market anymore, but I dont have a feeling for the timing for that.

evil will increase until jesus returns not become less – that is biblical. obama may be an instrument of god but he is not here to do good

Kevin, A few days ago some old song popped into my head while I was getting breakfast. It was from an Eagles song: You can’t hide your lyin’ eyes And your smile is a thin disguise I thought by now you’d realize There ain’t no way to hide your lyin eyes Two things. As I heard this it was also a play on words for LION, as in satan roams around like a lion looking for whom he can devour. And the other is that the song was done by the EAGLEs band. Lyin’ eyes, tells me from the word band, that those that make up the band, as in a tribe, follow after the father of lies. Eyes are known as the door to the soul. I don’t know what soulless eyes will look like but I am sure we will find out. The word disguise tells me that the masquerade is almost over, the mask dropped, the costume discarded. Last year a friend shared a dream with me. She was in a piazza in Rome. She was alone and standing before a huge cross. She noticed a woman coming out through a door in the ground and recognized her. The woman ran the other way, so she walked over to see where she ran. She came into another plaza, where thousands and thousands, myriads of people were gathered at the Vatican for an unveiling ceremony. She saw a pope figure and a man in all black, cloaked in a black robe like a cape, that swirled around him, looking like a black rose. He saw here in the multitude and absolute hatred came through his eyes. She believes that she saw the false prophet and the antichrist. Revelation 13 Then I[a] stood on the sand of the sea.… Read more »

In 2008 the day after Obama was ,”Selected,” not ,”Elected,” the ,Mark Of The Beast,” 666 were the winning numbers in the Illinois Lottery! Was that a sign from above?
http://www.google.com/url?sa=t&rc…

That is one of over 100 pieces of evidence I have collected over the past couple of years and the list keeps growing.

Snopes tries to write it off and make the occurrence seem normal. http://www.snopes.com/politics/obama/lottery.asp

This was an interesting online conversation I had today. It was from a “Christian” claiming that the Jews in Israel are false Jews. Quoted all kinds of scripture, then claimed true Jews are from the tribe of Dan and are a dark skinned people. There is a theory that the AC will arise from the tribe of Dan. I wonder if O can somehow be linked to this tribe, as the belief is these “true Jews” are still scattered among the nations. Just a thought. Here is what the guy wrote: “The True Israelites are a cursed people dispersed among the nations still to this day suffering from ALL the curses set out in the covenant between the Israelites and the God of Israel. But in case you still don’t get it: the Israelites are a black nation who is living among the nations in servitude whose ancestors were enslaved and shipped across the nations as bondsmen and bonds women”

JR Church and others have done extensive research on Obama’s ancestry and proven he is a descendant of the tribe of Dan on his mother’s side. He is the antichrist.

Abby, here’s the link to the interview Rick Wiles had with JR Church, if you would like to hear it (it was a good interview, by the way): http://www.trunews.com/friday-january-2-2015-j-r-church-tribute/

Wow, thanks for the link Linda. I figured there was something to this tribe of Dan theory when I looked to see what tribes of the 144k God marks and Dan is not listed. Guess I’m a little late to the game on this one!

I thought it was very revealing on the day of the supreme court ruling when he praised that decision (same sex marriage) in the morning….saying justice had arrived like a thunderbolt and then later that afternoon visited the church in Charleston and lead them in the song Amazing Grace….I don’t think it would be a stretch to say it sounded like a mockery. I noticed the congregation rose to their feet and began singing and i thought what deception…I’m not big on facebook but i did notice everyone on FB saying how much they enjoyed hearing obama sing that…unreal.

Like James mentioned, above, J.R. Church did an extensive study on the entity’s heritage. It has been a while since I heard it, so I don’t remember that part Warren, but here’s a link to the interview he did on TruNews (it was an excellent interview, by the way): http://www.trunews.com/friday-january-2-2015-j-r-church-tribute/

Isn’t there something in the Bible that says the Antichrist will rise from the bloodline of the same ones who crucified Christ? I’m not well studied on the qualifications but I recall reading that somewhere. One thing that can not be denied, O is lawless.

You are referring to this verse, “The people of the prince who is to come will destroy the city of Jerusalem and the sanctuary” (Daniel 9:26). It connects him with the people who destroyed Jerusalem, which was fulfilled by the Roman armies in 70 AD. This verse could be interpreted as referring to his bloodlines or to his power base since it does not specify. Either way, Obama meets the requirements because his financial support comes from the European elite, including George Soros and the Rothschild family. Research by JR Church proves Obama is a blood relative of all of the royal families of Europe from which all kings, queens, and Presidents have come from.

I will add this: WHEN and I will say it again WHEN the Revelation 13:3 “event” occurs (think Kennedy / Lincoln) “events” AND within 3 days . . . “oh look, he’s alive . . it’s a miracle” . . . THEN maybe one or two more might have “eyes to see” and “ears to hear” that the entity in the White House IS “the antichrist”, which is the same as “the mahdi”. The truth about all of this, WILL come out and maybe those one or two more might realize that when there is a mandated bio-metric identifier, associated with “obamacare” . . and ALL must have it? THAT IS THE MARK OF THE BEAST.

This “unpopular” (and mostly scoffed, criticized, denied, ect.,) is one that MOST have difficulties believing. When we have been given this revelation, it is not something we “enjoy” or “seek to be right” .. it is to warn the Body of Christ to be aware, be prepared and to be clean in our walk before our Holy Lord. Scoffers will still scoff. . . mockers will still mock. . . those with unbelief will not believe still. We have shared this revelation as prompted by the Holy Spirit, out of obedience to and LOVE for our LORD and Savior, Jesus Christ. What anybody chooses to do with that revelation from there? It’s totally up to him/her. The warnings have gone out. May ALL who call on the name of JESUS, truly seek Him and follow Him 100% and may each FULLY seek the truth, for it shall set us free. It takes courage, but it’s still the truth.

I believe a time is coming when Obama is going to take off his mask, shapeshift, and show his true colors for the whole world to see, but sadly by that time most people would have swallowed his lies hook, line, and sinker and may i add the fishing rod too! LOL !!!

No one will care even then. That’s the whole idea of the flood.