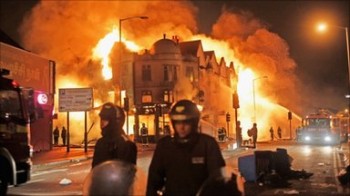 The following is the transcript of a prophetic warning from Christian minister Perry Stone regarding the future of America. Like so many others, Perry Stone sees fire coming to America. The video presentation is provided below.

“One of the things that the Holy Spirit gave me was in May 2008 at the partners conference in Pigeon Forge, Tennessee. I was standing at a river looking in 180 degrees. I counted at least five major cities. They were cities in the United States. There had been rioting and fighting inside certain sections, in the poorer sections among ethnic groups in the cities. They were literally burning these cities down.”

“When I saw this, it was brought to my attention that in 1985 David Wilkerson wrote a book called, “Set the Trumpet to Thy Mouth,” in which he predicted there would come at sometime in the future a Russian invasion attack against the United States that would follow an economic collapse of the economy in the United States. That was written in 1985.”

“On September 7, 1992 Brother Wilkerson wrote, ‘I have had a recurring vision of 1,000 fires burning at one time in New York City. I am convinced race riots will soon explode. New York is a powder keg. Federal and state welfare cutbacks will be the spark that ignites the fuse. There will be 100,000 angry men on the streets in a rage because they have been cut off from government benefits.'”

“In March 2009 I was in Baton Rouge when David Wilkerson said, ‘An earth shaking calamity is about to happen. It is going to be frightening. We are all going to tremble, even the godliest among us. Major cities across America will experience riots and blazing fires like we saw in Los Angeles years ago. There will be riots and fires and cities worldwide and there will be looting.'”

“A friend of mine who knew brother Wilkerson personally told me he never made it public but privately he told his friend it was an angelic visitation that warned him this was coming.”

“I saw the cities burning and I am not happy to even say this… there are five major cities right now that are on the verge of complete bankruptcy. If they start cutting money out of the unions, which is the police force, and they have already done it in some places, and if there is any kind of a cutback in benefits that goes to some of the people in some of these areas I promise you you will see fighting and burning of cities In the United States like we’ve never seen it before.”

“Now someone says, ‘Boy that sounds like bad news. Why in the world would you want to say that?'”

“Now I’m going to tell you something. The Holy Spirit wants his people to not be in darkness regarding anything that is going to happen. It is not that we say it out of fear. We say it so we can start praying. The city you live in you pray for God to preserve it and help it. That is why you tell these things like this.”

My biggest fear is that since I have slid far away from God from how devoted I used to be. That he will no longer accept me or my children/family. I’ve lost heart for the things of God and hard to pray to him anymore. I’ve asked churches, prison ministries Godly people etc… for help and they all turn their backs on me in my darkest hour! that’s how I feel God has done with me! That he has his people turn their backs on me as well. I need him but nowhere to be found when I was in agony! I call on him with no sign of his presence. Please for me and my wife and children/family. WE WANT AND NEED HIM IN OUR LIVES!!!

I have just read you comment. God never leaves us or turn his back on us. that is a lie from satan. Jesus said I will never leave u or forsake u. STOP believing the enemy and just repent of your sins and go on with your life and live for JESUS. may God BLESS YOU AND KEEP YOU.

Hi Javier, any chance you are still reading Z3? How are you doing?

As long as there is breath in your body and you have not taken the mark of the beast you have time to repent. Seek the Lord with all of your heart. He will hear and answer you!

Trouble comes and goes, but the promises of God always remain the same. We are not dependent on the world system to meet our needs, but on God who always provides for his children. So even in the midst of trouble those who have faith can take hold of his promises, “The Lord is my shepherd, I shall not want (lack). He makes me lie down in green pastures.” (Psalm 23:1-2). “And God is able to make all grace abound to you, so that always having all sufficiency in everything, you may have an abundance for every good deed” (2 Corinthians 9:8).

What he said about riots came to pass.

I agree with and believe this prophecy. However, it appears it will be protests against police shootings involving black lives matter and other groups that may start the burning of cities. That being said, it is being and has been reported starting last month consistently on http://www.downdetector.com, that EBT/SNAP benefits are not being distributed. Combine this with the violent protests, civil unrest…the NDAA and Obama’s hints and executive order threats of martial law….you have a powder keg ready to explode at anytime!

Problem is, seems nothing ever comes to pass when Perry sets dates and times. He will give hundreds of prophecies and get one right, then call himself a prophet. I really believed David Wilkerson heard from God but Perry Stone not so much. I love the Lord, believe in all the gifts of the Spirit, but I am just real hesitant to listen to Perry because of all the missed prophecies, especially the date he set Sept 2015 about economic collapse of the US.

Prophetic words are not like the written word of God because they are not necessarily set in stone. They let us know the destination we are approaching unless we change course. They reveal the important role we play in what happens in the earth. God has given us dominion and free will to make our own choices. His will is always done in heaven, but not always done on earth. I believe that explains why some prophetic warnings do not happen, especially regarding timing. I never heard Perry Stone say anything about September 2015, but if he did I don’t fault him one bit because I know God extended us more time, which I have documented in my posts.

Thank you James for this post. I love Perry Stone. I so agree with this prophesy.

I have been watching Perry Stone (MannaFest) for probably a year (maybe more) and have read several of his books. I really loved watching him on Periscope (but I uninstalled the “app”) talk about prophecy and events unfolding.
I want to thank you, though, for posting the attached youtube video. I had not recalled seeing it. I have been praying for the Town/City that I am in (as well as for ALL true believers) but until I watched this I didn’t really understand why it was important. I’ve just been doing it.
Blessings,
-Kenzel