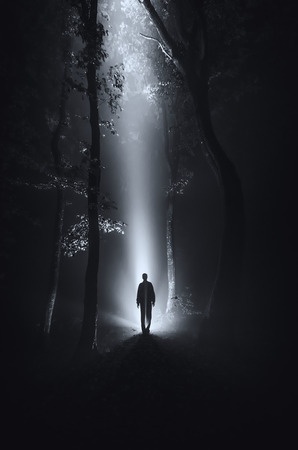 A period of deep, intense darkness is coming in the future for My People. This darkness will be a time when the enemy is triumphing, though only for a while. Some of you may think I have forgotten you, or forsaken My Promises, though I would never do either.

Remember, My Little Ones, that all scriptures must be fulfilled before the end.

No matter what you see or hear around you, do not ever believe the enemy’s lies that I have forsaken you or that I do not care, for I have already proven My Love for you, and I will never forsake you.

These are the times when your faith shall be sorely tried, and you must know Me well to know I will never leave you. And though the enemy triumph for short while, it will not always be so, for he is defeated already, and you will indeed see his total defeat in the end. And those who persecute My Righteous Ones shall be judged in the end as well.

Do not fear, My Children. Do not lose hope and never let go of your faith in Me, for by it you shall be saved. Rejoice! Your eternal home is here with Me!

In March of 2008, the Lord gave me a vision of coming darkness.

Isaiah 60:2
For, behold, the darkness shall cover the earth, and gross darkness the people: but the Lord shall arise upon thee, and his glory shall be seen upon thee.

Psalm 91:5-6
5 Thou shalt not be afraid for the terror by night; nor for the arrow that flieth by day;
6 Nor for the pestilence that walketh in darkness; nor for the destruction that wasteth at noonday.

Hebrews 13:5
Let your conversation be without covetousness; and be content with such things as ye have: for he hath said, I will never leave thee, nor forsake thee.

Matthew 26:54
But how then shall the scriptures be fulfilled, that thus it must be?

Matthew 10:22
And ye shall be hated of all men for my name’s sake: but he that endureth to the end shall be saved.

John 3:16
For God so loved the world, that he gave his only begotten Son, that whosoever believeth in him should not perish, but have everlasting life.

1 Peter 1:7
That the trial of your faith, being much more precious than of gold that perisheth, though it be tried with fire, might be found unto praise and honour and glory at the appearing of Jesus Christ:

Revelation 2:10
Fear none of those things which thou shalt suffer: behold, the devil shall cast some of you into prison, that ye may be tried; and ye shall have tribulation ten days: be thou faithful unto death, and I will give thee a crown of life.

Revelation 13:7
And it was given unto him to make war with the saints, and to overcome them: and power was given him over all kindreds, and tongues, and nations.

1 Thessalonians 2:15-16
15 Who both killed the Lord Jesus, and their own prophets, and have persecuted us; and they please not God, and are contrary to all men:
16 Forbidding us to speak to the Gentiles that they might be saved, to fill up their sins alway: for the wrath is come upon them to the uttermost.

Anastasia. ..that was a beautiful encouragement. He’s testing me (and many others) this very hour on being ready to lay down my life for his purposes even when its something that makes no sense in the natural.

@ Max and Peggy–yikes! We just found out we are expecting no. 4. Though we were hoping to avoid it, we are not using hormonal BC (abortifacient potential) and, at our age, this sort of thing is highly probably in the context of a loving marriage–unless dramatic (often morally dubious) steps are taken to avoid it. Though I am, indeed, frightened by the perilous future my children will inherit, I don’t think that the answer to such fear is to resort to limiting God–which (perhaps unwittingly) is something I hear in your grief for these young families.

God doesn’t create new life recklessly, without giving it a plan to prosper. Finding that plan may be hard, painful, and full of suffering, but that in no way compromises the beauty of God’s plan and the amazing love He extends to each child.

Just in the last days, two comments on this website speak to this–Linda Clay on 11.30 under the Coordinated EMP article saying that the Lord gave her the clear command: “DON’T LIMIT ME” and, even more specific, Avi Laks comment on 11.28 regarding why homosexuality is an abomination: “…(It) brings Creation To An End. I was told is like holding back the hand of G-d. {G-d forbid!!} Each one of us, our act in given birth to new life is extension of G-d’s creation. we are created in G-d’s image.” If homosexuality offends God in the way it prevents biological reproduction, wouldn’t our avoidance of children through other means also bear the same guilt?

I am not Catholic but I see that many of Catholicism’s views on traditional family to be accurate according to God’s order. The creation of life is God’s domain and we enter it (i.e. sex) prayfully and in covenant with His Will. I come from a family of 12 children (am am the seventh) and, yes, there were times in which it was impossibly difficult for my parents. But they endured and the fruit of their effort is ample: twelve beautiful souls who know the difference between the ways of the world (two kids and annual vacations to the Caribbean) and the ways of God (hordes of little ones marching around at 6am Christmas morning merrily shouting out Jingle Bells and fencing with tongue-sharpened candy canes), who live by faith as they marry and start their own God-fearing broods.

I believe that God’s Will explicitly led to the creation of this new little one and that, whatever happens, He has Big Plans for it. I also believe, by faith, that God will protect our family from the brunt of what is coming. (He led us to Bavaria, German some years ago and I believe we will be safe here for now, until He leads us again.) But all of my siblings are back home in the states, most married and procreated their own little ones (we number over 40 at this point, and rapidly increasing). Yes, I am terrified for them. I have a terrible premonition that many of them will suffer violently and perish in the coming trouble. But I also know that their souls are safe–they are all strong Christians–and, if their end comes, it will be such an end as to give great glory to our Lord and Savior.

May we all have the strength to walk the treacherous paths ahead of us with our hearts untroubled and our faith firmly planted in God’s plan–even so far as to trust Him with the care and protection of our most vulnerable loved ones.

May we all have this sort of faith: http://www1.cbn.com/cbnnews/world/2015/June/Widows-Joy-He-Didnt-Deny-Christ-When-Beheaded/

May we all have this sort of courage: http://www.dailymail.co.uk/news/article-2642655/Mother-facing-death-penalty-marrying-Christian-forced-birth-legs-shackled-Sudanese-jail.html

Anastasia,
For those with faith in our Lord and Savior Jesus Christ, I’m sure HE will work it out for you as you say.
When I wrote, I had in mind several people who don’t know the Lord.
That gives me cause for concern.

Anastasia,
Also, I feel prompted to tell you that a WONDERFUL end-times “Breaking News Matching Bible Prophecy” Evangelist, Anita Fuentes became pregnant a few months ago. Initially she was upset about it, then the Lord revealed to her that this is part of His plan for her family (she already has several young children and several older ones…..I don’t know how she does everything that she does!).

God BLESS. Trust in HIM!

Thank you Peggy. I know–the prophecies about people resorting to the cannibalism of their own children is heinous. I think that most people, however, will not resort to this evil. If you look at how starvation has played out historically (Ukraine’s Holodomor, for instance), most people would rather die than take it that far. I believe this applies to non-believing folks too–that God’s law is written on our hearts and even secular parents feel the maternal and paternal love of God for their children. I actually believe that the witness of such horror will be the very thing that ignites revival in the larger U.S. population–that such desperation and helplessness will drive even the most staunch non-believers to their knees in prayer to the Almighty God.

Thank you for telling me about Anita Fuentes–how beautiful.

Lamentations 3:2
He has driven me away and made me walk in darkness rather than light.

Max,
I feel the same way regarding your first two sentences.

Peggy, this is exactly what the Lord was telling me. This for me is another very important confirm, this is very close to happening:
http://vvmint.org/novembet-302015/

Donna,
I checked the link. Good message from Bette Stevens. I REALLY respect her messages!

Yes, hard times are indeed coming. I feel sad and sorry these days when i see young people/couples running into marriage and having babies unaware of the dangers approaching. In the days coming ahead it will be very hard to feed young children let alone adults. I once saw in a dream/vision a scene reminiscent of the movie “Soylent Green”, where the workers of a food processing warehouse were cutting people up for food. I believe this will happen towards the end of the 7 year tribulation, in parts of the world ravaged by famine, nuclear war fallout, etc.

The Bible says that fathers will eat their children, and children will eat their fathers. The coming famine is beyond description. Ezekiel 5:10; Leviticus 26:29; Deuteronomy 28:55,57

Thanks Glynda.. even though we all know these things,it is good to be reminded and comforted. Yes. Evil and Satan has already been defeated, we have to remember that in the days ahead..
God Bless.