You are here: Home » Babylon » Mark of the Beast » PDF Document To Share With Loved Ones Regarding What Comprises the Vaccine, the Patents For the Technology Being Used & Links to Scripture (Mark of The Beast & 666) 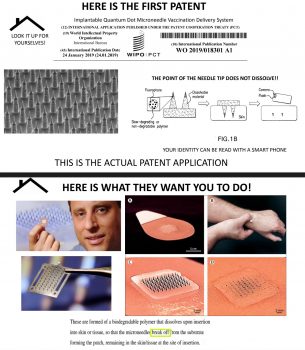 PDF document to share with loved ones & friends regarding the coming vaccine which is moving closer towards becoming the Mark of the Beast. Please share far & wide. Here is the link for anyone that might prefer to copy & paste the link in a message to friends – https://drive.google.com/file/d/1moMPtBZmvaG4KeYeoEDSWe4cJQmR949S/view

I expect this will be deleted as it is a Google document. Save it to an external hard drive.

Note: I sent out 22 emails to individual friends before Yahoo mail had “server issues”. Try to use methods to share this that are not controlled by the biggest tech companies….

What I tell you in darkness, that speak ye in light: and what ye hear in the ear, that preach ye upon the housetops.

I was thinking of joining the US Army Reserve to serve our country but now I’m afraid they’ll force me to take vaccinations like the coronavirus vaccine that go against my conscience. Since vaccines in the army are required should I not enlist?

Sounds like you already have the answer because your inner witness is showing you the way. He will not lead you astray.

AMEN!!! Completely agree with you, James!! What a truly wise answer!!! God bless you and all those you love!!! 🙂

I agree with James. I have uncovered different stories about the enlisted individuals receiving all & any vaccines because there is a belief that the government owns your body. Another vaccine you will receive which is absolutely horrible & will screw up your immune system is the HPV vaccine that was approved using falsified scientific studies!

I would strongly encourage you to pray about this as I am 100% positive you would have no say in taking or not taking the Coronavirus vaccines or any vaccine for that matter.

It’s true unfortunately, you become their property when you enlist and will have no choice but to receive any and all vaccines they impose on you. It’s a guarantee the covid vaccine will be included. Pray hard about this decision!! God will lead you.

It’s an 8 year enlistment. Whoever comes after Trump, you will forced to do their bidding as well or suffer the Iron Hand of the UCMJ. Think carefully on this one. The US Army did me a lot of good but I got out in 2005. Times have changed.

Army question!!! I completely agree with James. I have also read/heard that the military will at some point be expected/ forced to enforce (shoot) American citizens at some point in the End Time days ahead!!! God bless you. I will pray to The Lord for you and the answers you seek!!!

Think about joining Oath Keepers founded by Ron Paul Staffer and US Army Vet Stewart Rhodes. They have chapters all over the US filled with veterans, active duty, police… Oath Keepers basis is they will not follow orders that violate the constitution. Good Folks.

I joined the U.S. Air Force in 1973. One day during basic training, we were taken to a building, told to remove our shirts, lined in single file, told to walk into a building. Once inside I realized we were getting VACCINATED!

As each of us stepped forward, we would received AIR GUN vaccinations, shot into our shoulder muscles, from the left and right, simultaneously! We received a total of four air gun shots … two in each shoulder.

Almost immediately, I got very nauseated, and had to sit down for about twenty minutes to attempt to somewhat recuperate. Since I have never been averse to needles, blood, cuts, etc, I know it was the contents of the shots to which I was reacting. I still do not know what they injected into us.

A few months later, I was awarded a TOP SECRET EBI security clearance. Subsequently, I learn many evil things about our government, and it’s activities.

Unfortunately, the vast majority of military members are not privy to the truth, to which I was. They simply take/follow orders, in a compartmentalize manner, thinking they are being patriotic, and fighting for the freedom of our country.

After four years of honorable service, … as they call it … I could have gone to work for the CIA, or in the White House. I declined the opportunities, and chose my freedom.

Knowing what I now know, I would never repeat the same decisions.

Thanks EPG! Downloaded. You thought about putting a blurb on there about mRNA vaccines? What they are & how they permanently alter your DNA?

Hi MattNZ – This was created by Anthony Patch, not me. I agree that would have been great information to include. On the “Here is what it is made of”, there is mention it will modify & change you.

Sorry to see your country’s dictator was re-elected. 😢

The “Buck-toothed Bolshevik” gets another 3 years. God help us.

Disgusting what these evil Health officials ,politicians Pharmaceutical companies, +many more (really words wont explain how very evil 😈 and abhorrent man really is.
( A .Fauci, B .Gates & Frances Collins & many others .). .

🐒 Chimpanzee virus. & various cancer cells. YUK.!! . I hadn’t heard of that one.. I had heard of humanised mice cells – C Solum info.

Driving thru the suburbs on my way home today I passed a Baptist Church on the road & noticed the Sign outside the Church said COVID 19 Praying for a Vaccine- I thought to myself how brainless & clueless the people that make up that particular church must really be – so deceived.!!

Great post Anne,
Both my grandfathers were Baptist pastors. They would turn in their graves if they knew the
sad state of Some Baptist churches. Just saw the announcement by Daniel Andrews on banning conversion therapy + prayer for homosexuals including a prison sentence in Victoria.
Daniel is a profoundly evil Premier and yet many still think he is great.
Really sad,
God bless , Phil

Hello Phil ,Great to read you comment. Yes I am sure many like both your grandfathers generation would be Horrified.! by the belief systems in many of the churches now who have certainly compromised the TRUTH of the SCRIPTURES.

Sad sad state of Affairs: agree what you mention re Dan the man.

Cheers to you also & your family; have a great weekend.. stay focused on Jesus. .cast all our cares on him.. take it all to the Cross.. Let us stand united for TRUTH for a Holy Righteous- Father God’s word.

Thanks Anne
God’s protection to you and your loved ones,
Phil

I have been doing some research into the Astra Zeneca covid vax. It has a DNA from an aborted 14 week old male fetus, another human fetus cell line, Chimpanzee virus, & various cancer cells. They appear to be doing the vaccine with regular hypodermic needles. How does the vaccine that you are talking about differ from the one I am talking about? Is it just the way it is administered? Is one a shot to change your DNA & the other the mark on the hand or forehead. I am trying to get all this straight so I can help more people.