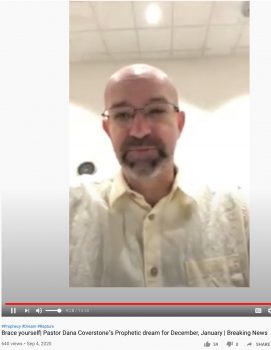 – Long food lines, people standing in lines, not in cars, waiting for hours throughout the nation
– No ships moving between countries. Saw ships in port on both east & west coasts. No trade moving around the world
– Headline “Baltic Dry Index is dead”

– Shuttered properties
– People in coats in their homes with closed curtains looking out
– Dirty, dingy & Gray snow on street – not pure white snow

– Lights flickered.
– Darkness in all states.
– Looked like America was like a lightbulb flickering & about to go out

– Fat vultures with rotting food hanging out of their mouths

– A figure of depression with a face mask with a smile, choking people & pushing them down on the ground

– The St. Louis Arch, people standing under it with very expensive suits
– The men had what looked like nuclear suitcases & then an alarm went off.
– The men all got into black SUVs & went east & west across the United States.
– The men had a Wall Street journal newspaper under their arm & darkly tinted sunglasses.

– Tired people – people who had lost the resolve to fight

– Group of Christians traveling around & reminding people, “Remember what Jesus said about needing to flee in the winter”.

– Lights around the country. Churches were keeping warmth & hope in their communities.

Dreams have had different caliber to them. This one left him more shaken.

Three things that stuck out to him in this dream were the long food lines, the people in the emergency shelters & the Baltic Dry Index being dead.