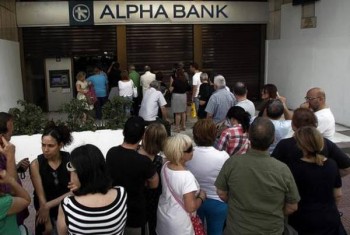 Due to an accelerating bank run in Greece, the European Central Bank (ECB) announced today they have cut off funding to Greek Banks, forcing the banks to close until further notice.

Panicked citizens have been standing in long lines around the clock this weekend withdrawing euros from ATM machines. It is estimated over one billion euros have already been withdrawn from ATM’s this weekend, forcing a liquidity crisis for banks. Grocery stores and gas stations are also getting cleaned out as people are immediately converting their cash into real assets.

The only thing allowing the Greek banks to remain open was their access to Emergency Liquidity Assistance from the ECB. Now that those funds have been cut off, Greece is quickly running out of cash. The government will now be forced to implement capital controls further limiting the amount of cash citizens can withdraw from ATM machines.

The euro has already plunged today by over 200 pips against the dollar, which is a big move in the Forex market. It equates to about 2 cents for EUR/USD. In the United States, stock market futures are already down over 300 points. Stock futures indicate how the market is likely to perform during the next business day, but are not always an accurate predictor.

After weeks of failed negotiations between Greek Prime Minister Alexis Tsipris and the ECB, Tsipris rejected the ECB’s final offer for a bailout last week. Tsipris said he refused to be blackmailed into submitting to their demands to cut spending on pension plans for Greek citizens.

Greece’s current bailout package expires on Tuesday, June 30. Without additional bailout funds, Greece will default on a 1.5 billion euro payment, which is due to the International Monetary Fund (IMF) by Tuesday, June 30. A Greek default puts the entire European Union in danger because their financial institutions would be forced to write off a 320 billion euro loss. It is not likely the European sovereign governments would be able to bailout the banks due to their large debt loads, which have grown bigger every year since the 2008 financial crisis.

Tsipris called for a nationwide referendum in which the people of Greece will vote whether or not they want to stay in the European Union. Their choice is to either accept the austerity measures required in the bailout package or leave the EU and begin the process of rebuilding their failed economy. The referendum is scheduled for next Sunday, July 5.

In an interview this weekend, IMF Director Christine Lagarde called the Greek referendum irrelevant because the bailout offer expires on June 30. So even if the people vote in favor, the offer might no longer be available. However, she later said the IMF might be willing to extend the offer if the people of Greece approve it.

The latest move by the ECB and the comments by Christine Lagarde appear to be hardball tactics to increase pressure on Greece to accept the terms of the bailout package. They certainly have everyone’s attention now.

Given the current desperate conditions in Greece, it seems unlikely the people would reject the bailout offer, which includes over 16 billion euros in immediate funding. Approving the offer would at least buy them a little more time. Given the choice to start suffering today or postpone the suffering for another few months, it seems likely most people would opt to postpone their suffering.

The current panic could turn into a celebration if the bailout package is approved next Sunday. Highly volatile price movements for stocks and currencies are likely over the next couple of weeks. However, even if the European Union dodges this bullet they still have serious trouble coming soon with an escalating war in Ukraine and the threat of a derivatives meltdown in Germany’s largest bank, Deutsche Bank, due to rising interest rates over the past six weeks.

It appears the ECB and IMF are just as desperate as Greece. Why else would they want to extend another 16 billion euros to a nation that has zero chance of repaying? Bank loans are extended on the basis of credit worthiness. Since Greece has zero credit worthiness there must be another explanation for the bailout offer.

When we flew to Germany in July 2015, we were stopped by armed security guards just after we passed through our gate (to the airplane). They wanted to know where we were going to, and how much cash we were carrying. When we replied “Germany” and “100 Euros” they let us proceed onto the airplane. Everyone was stopped and questioned (prevent cash going to Greece?).

I had another dream last night. I was looking at my forex account and saw that the current price for USD/CHF had gone over 0.98. I was pleased and comforted in the dream. Then I saw it had gone higher and then back down, then I saw ’89’ and wondered if I had misread the first time and it was never 98 but 89. I was confused in the dream it was as if I was really tired and couldn’t concentrate. I take this as a confirmation that the price is going north of .98 the latter half of the dream I take to mean that after thus there will still be uncertainty and I will need to keep trusting and seeking God. Confusion is not from God.

Thanks for sharing that Rob!

Amen James! The Lord showed you all these things with FAZ and forex so we will profit from them. We have the Holy Spirit and he will lead us and show us the best time to sell FAZ etc… I have not opened a forex account. I need to read more and learn. Basically it will be 2 big trades with forex. Maybe I will open an account and have it ready but not do much with it until then? Thanks so much for all your great work in this site. Blessings

It takes a few days to get an account set up. You have to submit an application, which I think is pretty much always approved. The first trade, selling the dollar, might be happening in July or August so time is already getting short. I don’t know the timing of the second trade, but it might be this year. I would recommend keeping a very large cushion for both trades due to the volatility. A guy named Rob commented that he saw USD/CHF moving up to .98 before dropping way down to .58. It is currently at about .935 so a sell position would require at least a 5 cent cushion to avoid getting closed out with a loss. Forex is high risk so we need to be led by the Holy Spirit.

James,
My concern is that even if we have a big profit in FAZ or forex trading, if the government imposes capital control, then even if we made substantial profits on paper, we still may not be able to wire or have access to the money. What is your take on the capital control issue?

I believe we will have time to take the profits on FAZ. Markets will be in panic and might even shut down for a while, but the system will continue for a while longer. FAZ goes up in season two while the total meltdown does not happen until season four. The question is how much time passes between the two. I know FAZ goes way up this year, but I was not shown the timing of the other events. However, my guess is it could all happen this year. I don’t believe the Lord would have shown me what to do if there was no way to profit from it.

I have been following your blog posts & prayed about the financial prophecies etc. I seem to received confirmation that you are truly putting it out there to prepare the body of Christ to get ready in all aspects. Now, I have a question. Is putting some funds into Inverse FAZ better or doing FX trading? Which yields better resource for the Kingdom purpose? I dunno how to do it but am willing to learn & have some funds. I am also part of a revival ministry & came back from the Philippines. God did some amazing things & used me personally to heal. 100 plus people came to be healed & 100 plus were healed of blindness, lameness & even autoimmune diseases like Lupus. God is doing amazing things during these end times indeed. All glory to Him.

The biggest profits will come from forex trading USD/CHF. However, it requires a forex account and knowing how to use it. FAZ will also be very profitable, but I don’t know if we will be able to hold onto it for very long before all paper assets become worthless.

The Swiss National Bank intervened in the currency markets this morning to prop up the Euro vis-a-vis the Dollar and the Swiss Franc:

This also explains the sudden drop this morning in USD/CHF. Signs of desperation and merely a short-term solution. I don’t believe the central banks will be able to plus the hole in this dam. It’s going to burst.

My friends, I hope everyone is seeing what is going on here! Let this be a lesson to all the readers out there!! PLEASE, PLEASE, PLEASE don’t wait until the last minute to take your money out of your nation’s bank!!! Put your money into real assets that actually matter and will provide for your families and your community! Let’s remember a lesson from history… less than a hundred years ago, people in Germany had piles and piles of money in wheel barrels during World War I and others were coming and DUMPING out the paper money onto the street and actually stealing the WHEEL BARREL!! The wheel barrel actually had more value than the paper inside it!!! This will be a very bitter reality that is coming soon to a nation near you. Don’t wait, prepare your hearts and your homes! “What I say to you, I say to all… WATCH!!!!”