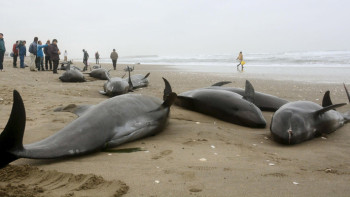 The costliest natural disaster in history might be about to happen again. The same ominous warning sign that preceded the 2011 Japanese earthquake and tsunami by six days happened again three days ago.

On April 9 2015 156 melon-headed whales washed ashore on the Pacific coast of Japan, about three times more than the 50 melon-headed whales that washed ashore in Japan on March 5 2011. Six days later a 9.0 earthquake caused a tsunami, killing over 18,000 people and causing meltdowns at three nuclear reactors. The World Bank estimated the economic damage was $235 billion, making it the costliest natural disaster in history. The 9.0 earthquake was the fourth largest earthquake in history. The resulting tsunami waves reached heights of 133 feet (Source: Wikipedia). 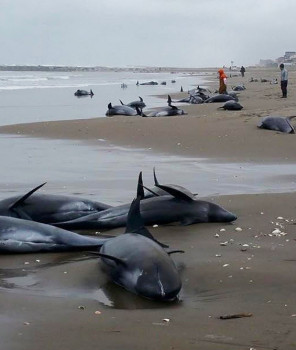 Just like the previous event scientists could not explain what killed the whales because there were no signs of disease. However, that has not stopped the Japanese people from connecting their death to a coming earthquake. Comments in Japanese social media networks show many people are concerned another disaster is coming soon.

Adding to the concern are two prophetic news headlines posted by Terry Bennett. On December 25 2010 he saw news headlines reporting two more large earthquakes hitting Japan, including one even larger than the 2011 earthquake. He saw the approximate timeframe for these earthquakes would be before June 15 2015.

Terry saw two earthquakes hitting Japan. The 2011 earthquake and tsunami hit Japan just ten weeks after Terry Bennett received these headlines so perhaps that was one of them. However, it measured 9.0 while the one he saw measured 9.1+. So there could be two more still coming, but at least one more.

When the 2011 tsunami hit Japan they were just starting to recover from the 2008 collapse of the housing market. Four years later their economy has still not totally recovered. Japanese sovereign debt levels are the highest of any developed nation, over 200% of their annual GDP. All that debt would make it almost impossible for them to absorb the cost of another natural disaster. It would be a devastating blow that would also send shockwaves throughout the global economy because Japan has the world’s third largest economy.

In your opinion do you think the earthquake in japan n the chemical melt down from the from the plants,could have any barring on the fish that washed up in Marina Del Rey,Ca

I don’t know what killed the fish, just that it has been a sign of an earthquake coming soon afterwards. So far so good for the Japanese. I would really hate to see them getting hit again after getting hit so hard in 2011.

Hey James, Look at this news headline. http://news.yahoo.com/strong-earthquake-felt-nepals-capital-063242616.html I wonder if this is in conjunction to this article? Any thoughts?

And we’re going into six months of the worst hell America has ever seen—there’s going to be chaos—not even the National Guard’s going to be able to quiet it down—we’re going to have to call out the whole U.S. Army.
God bless James I thought this might be of interest to you.
I have tried several time to send this, I hope it get to you.

Mr. Bailey,
I would like to bring this to your attention if it hadn’t already: I’d like to recycle something God shared w Paul Begley regarding the unexplainable deaths in nature. Hosea 4:3 “Therefore shall the land mourn, and every one that dwelleth therein shall languish, with the beasts of the field, and with the fowls of heaven; yea, the fishes of the sea also shall be taken away.” This prophecy is being fulfilled every day in an unprecedented way that has baffled the scientific community so much that National Geographic has made a documentary to ridicule and slander Paul Begley for voicing this Word of the LORD. Romans 8:21-22 “Because the creature itself also shall be delivered from the bondage of corruption into the glorious liberty of the children of God. 22 For we know that the whole creation groaneth and travaileth in pain together until now.”

Jesus Christ, Son of God have mercy on me a sinner.

Thanks for sharing those scriptures Caleb. It appears we are witnessing their fulfillment in these days.

I have not heard her directly, but according to Rick Wiles she saw two economic crashes in 2015 with one in the spring and one in the fall. I believe she is right.

Rick Wiles is now saying the first crash will be in fall 2015 followed by the next crash in fall 2016, so he’s ignoring his friend’s wife’s vision. To be honest, I’m not sure if this is the most accurate time frame. Also, Rick is making this judgement on his own personal reasoning. He’s gotten timing wrong before:

While it’s true that stock markets may collapse in the fall, or at least they tend to do so. Bond markets tend to do so in the first half of the year, like in 1994 or look at the recent crises in Argentina, etc. When a bond market collapses, that’s basically it, because then you get riots, capital controls, etc. as the government can’t even afford to fund their programs even if they wanted to. It’s more serious. The ‘big one’, remember.

Also, speaking of natural disasters, the Fed has officially stated that they are worried about something like that occurring.

I’ve found that multiple people (Rick Joyner, Bob Jones, etc. and even David Wilkerson has said that a japanese earthquake might come before the big US one and US collapse), seem to have this sort of vision of a japanese earthquake or some kind of event that forces them to sell their bonds, and just coincidentally I saw this article today showing Japan to have surpassed China as the largest holder of US debt.

This is in addition to some prophecies I’ve found that suggest that the US and China will be in a standoffish subtle ‘currency war’ over the dollar, and unexpectedly, it will be Japan which sells their bonds and cripples the US economy first, not China.

Thanks for sharing that. I had not heard that Japan had passed China, but it makes sense because the Fed transferred the bond buying from QE3 to Japan. Meanwhile, China has been wise enough to start unloading their dollar holdings.

Great job James. I pray for you and your ministry, may we also pray for Japan.