Today I had a dream where an unseen person told me the price of oil had moved up by $7.20. I assume that means per barrel, but they did not say.

Prices have traded in the $45 to $55 range during the past six months, as shown in the chart below. So an increase of $7.20 would be a big move, putting it near the top of the range, depending on the starting point. I was not shown the starting or ending prices or any dates, but there is an OPEC meeting scheduled for next Thursday, May 25. 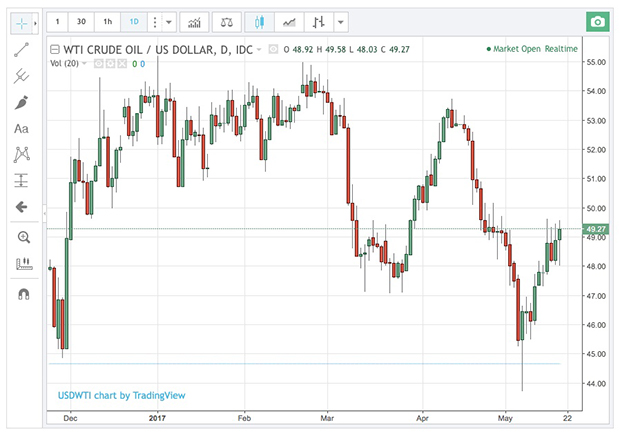 OPEC is expected to extend their agreement to curb production for at least another six months and possibly nine months.

“They don’t have much of a choice other than to extend the cuts,” Kim Brady, senior managing director at SOLIC Capital in Evanston, Illinois, said by telephone. “They have said they will do whatever needs to be done to balance the market. They haven’t quite achieved that yet.”

Russia and Saudi Arabia, the largest of the 24 oil exporters that agreed to cut output for the first six months of the year, said on Monday that they favor a nine-month extension of the curbs. Prolonged curbs are needed to reduce global stockpiles to the five-year average, the energy ministers of the world’s biggest crude producers said. (Source: Bloomberg)

Extending the agreement should be bullish for prices, but is likely already priced in since it is public knowledge.

Based on my previous dreams and visions, the initial price movement has often moved in the opposite direction from what I have seen, so it is not an invitation to jump in right away. For now, I am just watching and waiting to see if we get a counter move down before going long.

Regarding silver prices, I am out of the market currently, waiting to see a recognizable pattern, which I have shared in previous posts.

Without knowing the dates or the starting prices, this information is incomplete, not enough for making trading decisions. It is offered only as a starting point for prayerful consideration and is not a recommendation for investing.

7.20 from the low of 42 puts it at 49.20. That just so happens to be a fib retracement level and also right smack at the daily downtrend line. I believe we may see this fulfilled shortly…

49.20 is the top, right now! Exactly a 7.20 move up.
Amazing work. Lined up with technicals perfectly. Let’s see if it holds and drops.

James,
Thanks for clarify.

James, I think we peaked maybe.

Now it seems we are heading down again. So possibly your revelation has been fulfilled. SNS

Possibly, but I am still watching for a $7.20 move up because that’s the way I heard it. If it drops down to $42 I am planning to open a long position with OILU.

Oil has been moving hand-in hand with silver for the past few years. This is because cost of production sets precious metal prices, not supply/demand. Check out http://srsroccoreport.com for an in-depth explanation.

Also, output doesn’t control oil prices. I believe that’s a false narrative from the media to cover up low economic growth. Low demand from low growth causes oil prices to fall. The global debt is peaking and we have no growth to show for it. No growth means shrinking credit. Shrinking credit means deflation. If oil prices rise, it will only be temporary. Oil’s fundamentals show that is has to drop long-term because of Energy Return On Investment (EROI), also explained at the above mentioned website. Maybe your dream indicates the move before oil will decouple from precious metals because fundamentals will be in play once again. We’ll see…..

James this is off topic, but I wanted to make sure you have seen this. http://www.thecommonsenseshow.com/2017/05/18/will-there-be-a-civil-war-if-trump-is-impeached/ This is sounding more and more like the dream I have had and the wake up call of the gun shot and the word, Lincoln.

James, are you still holding a short position or are you on the side lines?

I closed my short position after the steep drop this week. I believe equities will move back up close to 2400 before starting the big 100+ point drop. If it retests the lows around 2355, I am going to open a new long position, probably FAS. However, I am also watching for a drop in oil. If crude oil drops down around $45 or $46 per barrel, which is near the bottom of the recent range, I am planning to buy some OILU. So for now, I am on the sidelines waiting and watching.

James, watch for a 7.2% move as potential completion. These are usually metaphors. SNS

Thanks, I will watch for that, but would find it confusing if that is what it means because I heard dollars.

There are often hidden meanings in prophetic dreams and visions, but in this case the meaning was not hidden. I heard dollars, so I believe it means dollars. Even with that, other important pieces of information remain hidden since there were no dates or starting price points revealed. I would hope at least one piece was revealed because otherwise it reveals nothing.

It probably really is dollars. Correlating dates with the dream meanings doesn’t seem to work out typically…..SNS

The DXY is looking like a down trend. If i’m looking correctly at the chart it could be going to 95 area soon.

I missed yesterdays action. It was only a 2% drop ,but there were many areas to make great gains. This was just an example of what we can look forward to in the future.

The Gold/silver ratio GSR is going up but silver is not responding. Can’t figure that out either. The miners today gave back most of yesterdays gains.

Thanks for sharing that Ed. It must be my turn now. The next few weeks should be interesting.