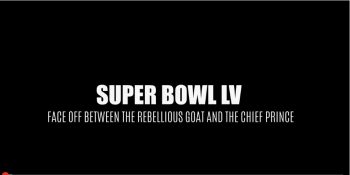 The bare chested man that ran out onto the field with the Revelation 2:10 tattoo on his chest with his tongue stuck out.

Fear none of those things which thou shalt suffer: behold, the devil shall cast some of you into prison, that ye may be tried; and ye shall have tribulation ten days: be thou faithful unto death, and I will give thee a crown of life.

3 But draw near hither, ye sons of the sorceress, the seed of the adulterer and the whore.

4 Against whom do ye sport yourselves? against whom make ye a wide mouth, and draw out the tongue? are ye not children of transgression, a seed of falsehood.

Here’s another decode on the rituals performed in January & leading up to the Super Bowl. Satan’s minions use these rituals to channel the masses’ energy into bringing their plans to fruition.

“Many people were confused about this year’s Halftime Show. In their eyes, the Weeknd’s performance was a fiasco. There is, however, a dark and hidden message behind the symbolism.

The Super Bowl ritual begins with the Weeknd inside a floating black convertible with red seats. In the backdrop is a Vegas themed skyline, a showgirl, and pink roses. The rose is a symbol of secrecy and is an emblem for the god Horus. The Weeknd is driving a car through this diamond shape object, which says “Welcome.” He is emerging out of the womb of the goddess into the New World. The word “welcome” comprises seven letters and has seven circles — which represent the seven planets. On his left side is a Pepsi logo, with its red, white, and blue colors, a symbol of America. The opposite side is a giant globe, which represents the Earth.

Soon afterward, the Weeknd steps out of the car and sits on what resembles a building’s edge. As the video camera zooms out, he appears to be seated on a square or cube, a symbol of Saturn. Then a demonic like being with glowing red eyes descend from the sky. Next, come flashes of light. In the biblical story, it was the angel Lucifer who fell from heaven.

In the Weeknd song “Heaven or Las Vegas,” he compares Vegas to Hell. So after leaving Vegas, he comes out of a gate or portal of glowing white lights. Has he entered heaven or hell? It appears like the heavenly Jerusalem, with the accompany of the host of heaven. However, this angelic choir represents fallen angels who rebelled with Lucifer. Their red eyes and dark robotic faces suggest they have chosen the dark side. Later they ditch the white clothes for black.

Next, the Weeknd travels back through the portal — and into a golden labyrinth or maze of mirrors. Esoterically, the gold color is about the transmutation of base metals into gold. That is the transmutation of the soul. In the Kabbalah, the palace of mirrors is called Binah, a symbol of Isis’s and the third Emanation. Mirrors are reflections, reversals, and opposites. In witchcraft and demonology, mirrors are used for spellcasting and act as portals to the spirit world.

While in the maze of confusion, numerous lookalikes chase him around. They wear his signature red suit jacket and black shirt. These dancers’ faces remain hidden under a white gauze. They’re faceless, having lost their sense of identity and individuality. They have become zombies. Perhaps, they represent MK-Ultra victims as cursive words, like ‘Gone,’ ‘Nothing,’ and Feel,’ illuminate the walls.

In the next scene, the background turns grey, a full-moon appears, and the city turns into a graveyard. What does this mean exactly? The moon is associated with the nighttime, evil, and when monsters come out. The tombs represent death and transformation. Perhaps, this alludes to a new Age of Transhumanism. Through genetic engineering, the human race is being rewired and transformed.

In the last scene, the Weeknd’s bandaged dancers take the field and march in total unity. They operate as a hive mind with synchronized movements. At the end of the set, the dancers drop to the ground like they were dead. Maybe this is a prediction of what will transpire in the next several years. The ruling bloodlines support eugenics and want to crush the human will. They wish to transform humans into cyborgs. The show ends with fireworks, which suggests their visions are near completion.“

– Finish your preparations now for the impending chaos that the Antichrist & Satan’s minions plan to bring to the masses to create fear, anger & hatred to incite violence & division.

– Make your time with God your top priority. Hearing His voice in the days ahead will be essential.

– Do what you can for loved ones but if people are still asleep at this late hour, your time is likely better spent on other activities to make your robe spotless & reach people who are at least partially awake.

– Continue to pray & try to connect with the unsaved. Judgement is coming & we must strive to get as many people on the ark with us.

– We are not to have a spirit of fear. If you feel fear & anxiety, press into God. He has lovingly prepared many of us. Seeing the lateness of the hour has not caused fear in my heart but a deep peace that things are playing out exactly as foretold in the Bible. We need to trust & REST in His Word.

– Give all that you love up to God for His care & protection. As a mom, I need to remind myself, “my children” were His children FIRST & my love for them is superceded by His love for them. He will not forsake His children & I will trust & REST in His promise! ???

– Let’s pray for each other & our Community. May our paths for communication & community remain open as long as possible. God willing.

– My blessings to each of you. It is a journey we have been on together for years & I am grateful for all I have learned from James, Z3 News Contributors & our Community. ? It has been a blessing to receive validation from my Brothers & Sisters as to the messages & things God has been showing me as well as to learn from each other & strive to honor God through a deeper understanding of His Word! ????