You are here: Home » Babylon » 1st Beast is Obama » “You Have Not Seen Obama’s Wicked Side Yet, But It is About to Manifest”
Share this post: 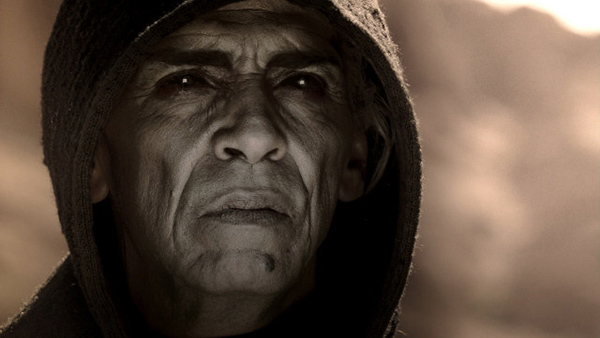 Appearing as a guest on the Tribulation Now Internet radio program on April 21 2016, Glenda Jackson shared a powerful vision and prophetic word regarding the 2016 election.

Glenda Jackson is the founder of Glenda Jackson Ministries. When she was young, the Lord Jesus told her she would be a prophet like Samuel in her latter days. She has been ministering for over three decades, following in the footsteps of her great aunt, Maria Woodworth-Etter.

Back in October 2014, I shared the following prophetic warning from Glenda Jackson, which she gave when she was a guest on Sid Roth’s television program, “It’s Supernatural”.

In her latest interview, Glenda Jackson expanded on what she saw and then delivered a powerful prophetic word. She made the following statements at the 2:45 mark on the audio recording below:

The Lord showed me, you know, when I was on Sid Roth’s (television show), He gave me a prophecy that this was going to be one of the worst elections we have ever had. He said we were going to be at one another’s throat. You know, it came to pass. That’s what is happening. They fight more than any election has ever been, to the point that it would not shock me at all if someone got killed in this election.

But God showed me, I had a vision of Obama in the White House, and there were Muslims around him. And he said as he was pounding on the desk, “I cannot leave this White House. This is my destiny.”

They said to him, “Then how can you stay on as President?”

And he said, “There is only one way, martial law.”

So I have really been seeking God and I know I am not wrong on this. God showed me Obama was going to win the first time and the second time when other people were prophesying other people (would get elected) and of course we know that my prophecy was true.

At the 29:15 mark, she delivered the following powerful prophetic word.

Jesus said we were living in a time when many would be deceived. Many! So don’t let any man or woman deceive you because these things are going to happen.

“Obama is going to (anointing falls on Glenda), he is going to be on there people. He is going to carry through. And what he wants, the desire of his heart, his wickedness is going to come through. You have not seen his wicked side yet! It is about to manifest, saith the Lord.

I tell you, and I tell you very quickly, things are going to turn upside down. The White House is going to have a Muslim flag flying over it, sayeth the Almighty God. I say unto you I am that I am. I am the now God. I am not the I was that I was. I am the now God, so believe Me now. Search out My scriptures. Be ready and pray and seek My face that you may know to escape what is coming upon this land. Very much wicked things are coming, sayeth the Lord. Many people are going to die. Many people are going to be killed because they were not ready, because destruction is coming such as never before, saith the Lord.

Get ready, get ready! My blood is sufficient for you! I look to see My children that have been sealed by the Holy Ghost. They shall escape. Did not I say in My word that a door was set before you and opened unto you? You are My Philadelphia church, sayeth the Lord. Get ready. I shall give you the keys of David. So get ready! I long for you to know Me in a greater way, saith God, than you have ever known me in the past, saith the Lord. Amen and Amen!”

As Glenda Jackson stated, others have claimed God told them Trump would be elected. So why would God give contradicting visions to different people? One possibility is someone is missing God, but another possibility is the outcome of this election has not yet been decided.

A prophetic word shared by Prophet Chuck Pierce, founder of Glory of Zion Ministries, on April 23 2016 revealed a six month period from April 25 (Nisan 17) to October 20 in which America will “determine its future.” He also shared this word in his April 27 newsletter. His message confirmed Matt Smith’s prophetic poem, which stated:

“From March until June, the spring season shall arrive,
There will be many people, found not to be alive.
During this same season, another checkpoint will originate,
Then another crushing blow, will seal this nation’s fate.” (see the full post)

Matt’s statement that a crushing blow will seal our fate could mean our response to the blow will determine our fate. In other words, if we humble ourselves by repenting before God, perhaps God would give us an alternate route that postpones the plans of the evil one. On the other hand, if we refuse to repent, then evil plans will succeed in canceling the election (or the election results) so that Obama remains in office.

Prophetic warnings are not set in stone, not on the same level as prophecies recorded in scriptures, such as prophecies of the first or second coming of the Messiah. Prophecies recorded in the Scriptures are all going to be fulfilled, but I believe warnings spoken through the gift of prophecy are conditional depending on how the hearers respond. This is illustrated by many examples, including Jonah’s warning that Ninevah would be destroyed within forty days and Isaiah’s warning that King Hezekiah would die of his disease (Jonah 3-4, 2 Kings 20:1-6). Neither of them were fulfilled, but both of them were from God, which proves there is more to judging prophetic words than whether or not they comes to pass (Deuteronomy 18:9-22). God has given us an important role to play in what happens in the earth. He has given us dominion to rule over the earth and a free will to make choices (Genesis 1:26-28). Our choices make a big difference, not only in this life, but also in eternity.

The plot thickens because I believe the events unfolding today go beyond conditional prophetic warnings because God revealed to me Obama’s attacks against the United States are the fulfillment of Daniel 11:39, which is a prophetic warning about the antichrist. I documented this in my post, Obama Taking Action Against the United States with the Help of a Foreign God. If I heard correctly, then it must be fulfilled, but perhaps there are different ways it could happen.

Glenda Jackson’s warnings have been confirmed by many other warnings shared on this site. Our Islamic Jihad category is filled with testimonies of visions and dreams warning of sudden Islamic attacks coming upon our churches, schools, and a new one posted yesterday regarding attacks on our hospitals.

Besides all of the warnings of Islamic attacks, the posts listed below document other warnings about Obama orchestrating attacks against American citizens:

Others have received warnings of Obama staying in office, as documented below:

When I first heard the prophecies about Donald Trump winning the election, I was skeptical, but when I heard TD Hale saying it, I began to be hopeful perhaps enough of God’s people had repented to allow God to push back the darkness. TD Hale specifically said, “Destruction has been diverted for a season.”

However, the only revelation I have received regarding this confirms Glenda Jackson’s warnings. In a dream in November 2014, I saw what appeared to be many years into the future of America, after we had been through a series of severe problems, which to this day have yet to happen. I saw Obama was still in office and still being called President. I met a woman whom he had appointed to carry out the final phase of their plan to mass murder the American people. I believe she was the same woman William Branham saw ruling over America. He wrote,

“Beautiful as she was, she was yet cruel, wicked and cunning. She dominated the land with her authority, she had complete power over the people.” (See the whole post).

The sudden nature of the Islamic attacks described by Glenda Jackson also fits the description of the sudden event I was shown that would ignite an economic collapse, so perhaps these are the same event. The 9/11 terrorist attack caused a severe market crash, and we have lots of reasons to believe the next one could be bigger.

As much as I want to believe God has given us an alternate route, He has not revealed it to me, so I continue to believe what I saw in my dream. I am not a Trump supporter, but anyone would be better than what I saw.

If we have an election and Trump wins, those would be encouraging signs, but I will remain skeptical until I see his inauguration. If that happens, it would be time to celebrate because it would mean God has given us more time. So I am hoping for the best, but preparing for the worst.