You are here: Home » Babylon » Antichrist » Son of Perdition’s Evil Schemes to Rule the World Exposed 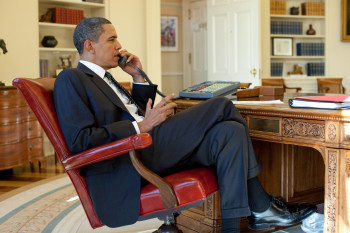 On the night of 29th December 2011 I had a short dream. In this dream I found myself in an office setting.

I was working in an office that was partitioned into various cubicles. One of the people we were sharing the floor with was USA President Barack Obama. I was working as one of his intelligence advisors.

I found myself discussing with a team in this office about the death of a certain West African leader who had just died in the dream. This leader was a Muslim and his death had been orchestrated by this intelligence team I was working with. The aim of eliminating him was to fuel division in the Muslim world so as to cause confusion and a state of chaos and lack of order. I was made to understand the purpose for our actions was an attempt to gain control of the running of the affairs of the whole world.

I was made to understand in my heart that the architect of this entire scheme was our boss Barrack Obama. This scheme we were working on really troubled me. It felt so evil and dehumanizing.

The setting and the theme of the dream had figurative implications pointing to the real agenda of what is most likely happening in these end times. I was made to understand the evil schemes and agenda that the man of lawlessness was now engineering. I then woke up from the dream.

We need to pray against lawlessness-begining at church and ending at the Rainbow (White) House.

Welcome to Z3 Kevin. I read your blog all the time. Enjoy Israel while you’re there

The ten horns are ten kings Who shall arise from this kingdom. And another shall rise after them; He shall be different from the first ones, And shall subdue three kings. – Is this the first of three?

Kevin, Thank you for sharing that. It’s easy to understand that if possible that we all would get sucked into something that isn’t right, just for doing our jobs, not knowing what is actually going on. I believe that they call that compartmentalization. I agree, we cannot even fathom how many agendas and counter agendas are going on, and agents, and double and triple agents, lost in the pit of miry clay. We, as a country, certainly are in the muddy quagmire, ah, but Jesus.

Compartmentalization is indeed what they call that, Karen, and was represented by the cubicles in Kevin’s dream. God gives us so many hints in our dreams!

I did not even equate that from the dream, the Holy Spirit must have brought that thought into my writing. Compartmentalization, what a word, anyway, is the same as in all mysteries, the idea of need to know is decided without consent of the lower echelon. And it goes to the top. Even then we have to realize that above the man at the top of the world, that there is another layer, or level above that, which is not of this world but above it, say second heaven the outer atmosphere. Isn’t it interesting the governments and agencies are seeking to contact, and trying to keep it secret at the same time? “They have already made contact before the flood and then after, is my understanding”. So secret societies, handshakes, meetings, speech and mysteries will all be revealed along with the revelation of the man of sin. It’s building and falling apart at the same time.

Al-Gaddafi would be a likely target, Darin – he fits the time frame if it’s current rather than prophetic – except that the dream specified a leader from West Africa. Lybia is west of Egypt, but it is not considered part of West Africa. Beyond that, I believe this particular leader was given as an example; one of many arranged deaths under Obama’s hand. Thus Al-Gaddafi might indeed have been one of them. Revelation 6:1: “Then I saw when the Lamb broke one of the seven seals, and I heard one of the four living creatures saying as with a voice of thunder, ‘Come.’ I looked, and behold, a white horse, and he who sat on it had a bow; and a crown was given to him, and he went out conquering and to conquer.” I agree with prophets who have declared that Obama has this spirit, the rider of the white horse. The bow is a long-range weapon, compared to everything else that was available at the time John wrote the book of Revelation, and can be used to shoot numerous arrows in many directions. This indicates that the rider would war with far-flung countries. Repetition is used in the Bible for emphasis (conquering and to conquer), but clearly here this phrase also has the meaning of conquering in multiple places. Thank you for sharing, Kevin.