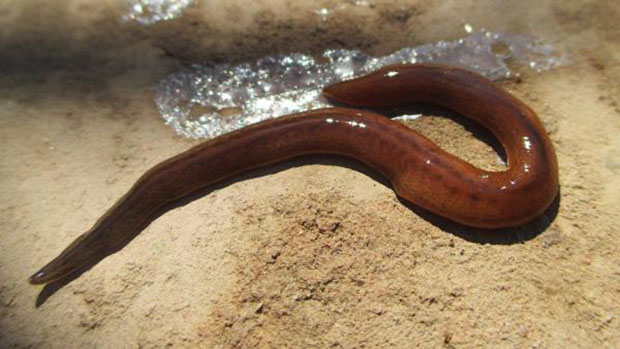 Many signs of the Lord’s return have been fulfilled since the Jewish people reclaimed Jerusalem in 1967, which I believe marked the beginning of the season of the Lord’s return. Jesus revealed the signs would include increased famines and pestilences, meaning pests, diseases and plagues. (Luke 21:11) Now, a new pest is threatening to destroy food supplies, specifically agricultural crops and wildlife, in Brazil and Spain, and it’s called the Obama worm.

This flesh eating flatworm grows to about 7 centimeters and has hundreds of eyes all over its’ body. Originally infesting rice paddies in Brazil, they called it a “leaf animal” which in their Tupi language is leaf (oba) and animal (ma), so it has become known as the Obama worm. These worms prey on earthworms and snails, which are considered essential for healthy soil because they aerate and fertilize it. Without them, soil becomes less able to absorb water, which hurts crop production and increases risks of flooding and landslides. Fewer earthworms and snails also means less food for birds. Unfortunately, birds won’t eat the Obama worms because the taste is so foul. From Brazil, the Obama worms crossed the Atlantic in the soil of imported exotic potted plants and have now been found in rice paddies in Valencia, Spain. They’re not only threatening agricultural production, but all kinds of gardens, parks and nurseries. (Sources: thelocal.es and rt.com)

In addition to fulfilling a sign of the times, the destructive nature of this worm has amazing similarities with the one who arises to rule the world before the Lord returns, the son of perdition, because he brings great destruction upon the whole world due to his extreme abominations against God. Like the foul taste of the Obama worm, the son of perdition will be a foul stench to God and all His righteous ones. Although the Obama worm was not named after Barack Obama, it seems appropriate because God has revealed to many people, including myself, he is the one who will fulfill many prophecies regarding the son of perdition. (Daniel 9:27, 11:39, Matthew 24:15, 2 Thessalonians 2:3-4, Revelation 8-18) For more details, see the testimonies posted in our antichrist category. Worms are also associated with hell, where the worms never die and the fire is never quenched, which is where the son of perdition will spend eternity. (Mark 9:43)

Let your hearts not be troubled regarding famine, brethren. For this is what the Scripture says in Psalm 33:18–19

Behold, Yahweh’s eye is on those who fear him,
on those who hope in his loving kindness;
to deliver their soul from death,
to keep them alive in famine.

The continual programming and foreshadowing is all around us now. Pray for discernment & heighten your senses. As part of their black magik rituals, they are required to “tell us” what is planned. Predictive Programming is inherent in our News, Sports, Entertainment, etc.

There are many excellent “decoders” on Youtube that are Christians (Many Fish, Nicholson1968, enterthestarz, The Scariest movie ever, etc.) that can help you understand what is being portrayed. You can see that “their plans” line up with the Bible.

We need to understand their messaging but not to have a spirit of fear, knowing that God is ALWAYS in control.

It is deeply sorrowful. Times are going to be very awful. We have to make sure we are deeply rooted (the parable of the sower) and that we keep watchful and in prayer. The parable of the sower is interesting because it describes believers who are choked out with the cares of this world and others who do not endure because their hearts are stony. In the context of the End, this might be the falling away. It is because the Word doesn’t become deeply rooted in their hearts. Faith comes from hearing and hearing from the Word of God. Man does not live on bread alone. That also goes back to staying connected to the vine. Perilous times.

Here is another article (https://www.eyeopeningtruth.com/16203-2/) showing how the media, celebrities & powerful people are calling Obama “the messiah”, “the one”, “our lord & savior”, school children being taught to praise Obama, the Obama Youth Brigade (with a hand gesture that is the same as the Hitler Yout Brigade), an Obama action figure, an online game, etc,, etc.

We need to be WISE AS SERPENTS, INNOCENT AS DOVES!

Seems this isn’t the only eerie creature with the Obama name. And these two (among others) actually were purposefully named after him.

Trapdoor Spider – Aptostichus barackobamai – Spiders in this group are rarely seen because they live in burrows underground. As their name suggests, they build protective trapdoors made from soil, sand and silk, which they hide behind, waiting to pounce on passing prey. https://www.livescience.com/25812-trapdoor-spider-named-for-obama.html

And another doozie:
Parasitic Flatworm – Baracktrema obamai, the flatworm that infects Malaysian freshwater turtles, a species and genus of parasite discovered by Dr Thomas R Platt, an expert on turtle parasites, who wanted to bestow the president with a gift of adding his namesake to the animal kingdom. https://www.theguardian.com/world/2016/sep/09/barack-obama-parasitic-flatworm-name-honor

Great finds Kirk. I saved these to add to the other worm.

Fascinating Kirk! Thanks for sharing!

Speaking of (a) foul (smell), Barry was known to stink and attract flies.
https://www.gq.com/story/barack-obama-alex-jones-demon-evidence
https://www.telegraph.co.uk/news/worldnews/barackobama/9825687/Barack-Obama-provides-landing-pad-for-fly.html

Did Jesus Reveal the Name of the Anti-Christ?: https://www.youtube.com/watch?v=PlT9SYR6jq4

Pertains to : Luke 10:18 ; He replied, “I saw Satan fall like lightning from heaven.