You are here: Home » Babylon » 1st Beast is Obama » I Saw Obama Come Up Out of the Water Three Times
Share this post: 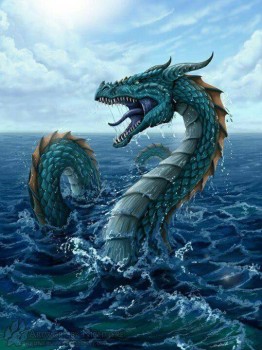 Back in 2009, shortly after Obama had taken office I was shown satan entering into him. Then a short time after that, I saw Obama come up out of the water three times, and three times I saw a dragon with the word ANTICHRIST written underneath.

Then I heard a voice behind me say, “Now do you understand?”

I came to this site and other sites like this after having had a dream about Obama. I dreamed that I was standing on a balcony within a huge domed building and saw on the opposite side of the balcony a group of people who I knew to be world leaders. The only one I recognized was Obama. It was as if they didn’t know I was there. Then suddenly he looked directly at me as if to say, “I can see you.” I was instantly afraid because in his eyes I saw pure evil. Then he turned into a large black dragon and flew up into the dome of the building. No one else saw what he had become. I awoke both myself and my husband by screaming out. The next day I went online to see if anyone else had been having dreams like this.

I believe you received this dream from God. It reveals many things about Obama’s true identity. Thanks for sharing it!

I think I may have the interpretation: each time he came up out of the water represents his rise to office. First term as president, then second term as president, and I heard recently that he wants to run for Secretary General of the UN. Of all the prophecies I’ve read about on this website, this one strikes me as true.

A major end time event has just occurred as reported by Hal Lindsey on his weekly TV show. The President of the Palestinians (PLO) has announced that he will be meeting with Ayatollah Komeni in the near future to discuss joint action against Israel. This is a major step towards the formation of a possible ten nation Islamic confederation out of which will arise the Assyrian, A/C. What is remarkable is that this is the first time a major Sunni leader has initiated formal relations with any Shi ite nation. This also underlines the shifting of power in the ME away from the Saudis and towards the Iranians. The Saudis have just offered state bonds because they are running out of cash. Obama and the US have also drawn closer to Iran with the recent treaty that didn’t please the Saudis at all. If these historical adversaries, Sunnis and Shiites, become friendly can a ten nation Islamic confederation be far behind that will offer a 7 year peace treaty to Israel, perhaps after a brief Psalms 83 war?? Bible prophesy is accelerating exponentially. God bless, Dolph

I saw that video today and it is truly amazing to see these things unfolding. And who is it that has just empowered Iran to rise up into their new role? It is Obama through his nuclear arms deal with Iran.

There is a scripture that tells us that Israel murmured and wanted to be governed like the nations, the rejected the Lord. He told the prophet to tell them they will indeed get want they wanted, yet it would be a king of fierce countenance.

I remember when Obama won his first election. I was watching it on TV (CNN). I saw how all the people of the world were celebrating from USA to Africa to Arab Nations (all over) I turned to my friend I was with at the time and said THIS IS THE BEGINNING OF THE END, He thought I was nuts. I just felt it in my heart and knew this was NOT RIGHT. The world worshiping a mere MAN.

Here my rtner aanswer from a good friend and ministry partner who will not mind me sharing, and I had gotten the same thing and so this is what came forth……..
You have a King,His name is Jesus Christ,but ,that wasn’t good enough,you wanted someone else,you cried out for change and so I (Jesus) gave you a Saul………

Thank you for sharing this Bette. Truth continues to come out in the open.