You are here: Home » Babylon » 1st Beast is Obama » Obama Seated High Above the Earth with Master Control
Share this post: 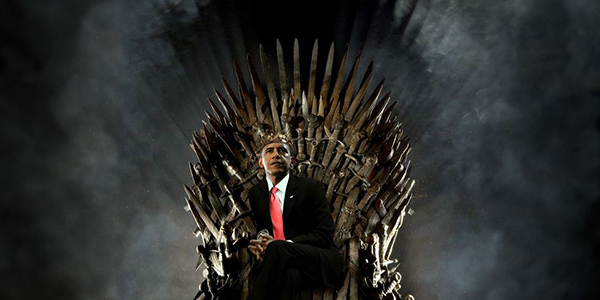 In a dream I was walking along a street. A man came to me and asked me to come with him. He said he wanted to show me something.

As soon as I agreed, I noticed a ladder from the earth that stretched up into the sky. The man showed me the ladder and I knew he wanted us to go up to the top. I knew there was something up there he wanted to show me.

Instantly, we were at the top of the ladder. Where the ladder ended, I saw myself and the man step off the ladder where it ended and we entered into a big room that looked like a command center. I saw individuals sitting before screens and control panels.

As the man showed me around the room, these individuals turned to look at us with angry looks on their faces. They wondered how we got there, but they also knew there was nothing they could do about it. As we passed by them, the man I was with opened up a door and asked me to step in. I went into a little room and I saw Obama sitting in a seat. In front of his seat was an enormous window that wrapped around him and he was looking out.

He paid no attention to us like he did not even know we were there. Then all of a sudden, the man and I were outside of this control tower looking in the window at Obama. The only way I could describe it is that he had master control. The room he was in was a seat of spiritual force and power.

Obama was dark and evil looking. I wish there was a way that I could describe the look of evil on his face, but I can’t. There are no words.

I knew that seat had been given to him. I also knew there was no way I could have known that if I had not been taken there.

I would like to add this copied from Joanie’s facebook page [unable to comment there by the way]
Seems to fit perfectly into Obama’s personsona
http://www.nbcnews.com/news/us-news/13-bald-eagles-found-dead-maryland-farm-n523696

As I read this article a thought came to my mind; if I recall correctly, didn’t Pastor T.D. Hale had a Prophetic Dream a while back where he saw President Obama shooting a Bold Eagle (USA) and laughing as he saw the bird falling down to the ground.
I mean from the 50 States of the USA why in the world this has happened in Maryland?
We all know that Maryland and Virginia yield federal territory to make Washington DC.
In other words, if you look at the map, Washington DC is inside Maryland.
Even more curious is that why 13 eagles?
Did you know that 13 is a number of many profound things most of them bad.
The number 13 originates with Nimrod at the tower and city of Babel, who was the thirteenth from Adam.
Also, in Genesis 14:4, “Twelve years they served Chedorlaomer, and in the thirteenth year they rebelled.”
The number 13 represents REBELLION. Coincidence? Perhaps the most obvious origin of the number 13 and it’s meaning is the fact that a child becomes rebellious at age 13.
The number 13 is symbolic of rebellion and lawlessness.
Thirteen represents all the governments created by men, and inspired by Satan, in outright rebellion against the Eternal.
Is this a sign from heaven or is this just my imagination?

dR. Mary Stewart Relfe (author of 2 best selling books on the MOB –Mark of the Beast) and founder of a prayer league prayed for years that GOD would reveal what happens to America during the end times. She had a map dream indicating that the area from Boston to Richmond would become uninhabitable and that radioactive fallout would cover part of all states bordering the Atlantic Ocean. A United nations force of up to 200,000,000 troops apparently will invade/occupy the USA for at least 6 months from California to the Midwest…but they’ll never take the Bible Belt according to hundreds/thousands of prophecies/visions. WRT underground shleters, they maintain a constant temperature of 56 degrees…so that one won’t freeze to death if one hass access to a shelter…When death dies, time will be no more, & thanks to Christ, death is dying

In deference to Grant’s criticism, I shall endeavor to avoid “ALL CAPS COMMENTS” thenceforward. I am in my 70s and have glaucoma…so I read and write a lot less than I used to…although I still write one or two books a year–mainly on theology and American history. There exist a plethora of individuals (David Wilkerson, theologian/author Franklin Logsden, Dumitru Dudaman, Dr. Mary Stewart Relfe, Father Andrew Wingate, evangelist/healer AA Allen, John Paul Jackson and many others )who have postulated and/or been told by angelic beings that all or part of the United States is either mystery and/or political BABYLON … I have studied hundreds if not thousands of prophecies about this ATTACK/JUDGMENT ON AMERICA –both biblical (EZEKIEL 39:6, ISAIAH 13, 14, AND 47?, JEREMIAH CHAPTER 51?, REVELATION/APOCALYPSE 9:18, CHAPTERS 17 & 18 etc) as well as the prophecies of Stormberger, Pastor Holzhauser, Nostradamus, etc. In another blog I explicated a dream I had just after John Paul Jackson (whose prayers along with those of other Christians may have delayed judgment on America by GOD by up to 25 years) about an apparent nuclear attack on the USA…probably during the 400th anniversary of the Mayflower Compact (i.e., 2020 AD). Virtually all the prophecies imply that anyone living outside the Central Time Zone (CTZ) as well as people living within 250 miles of Chicago, Illinois. Austin, Texas along with Kansas City and St. Louis MO would be wise to build an underground shelter AND/OR MOVE TO A RURAL AREA/SMALL CITY IN THE CTZ Inasmuch as the power grids may be inoperable for at least four years, it might not be a bad idea for everyone who has $3000 to invest in an underground shelter… even in the CTZ. I personally believe that the conurbation extending from BOSTON,MASSACHUSETTS to RICHMOND, VIRGINIA is political BABYLON. May GOD grant us the wisdom as to what we should do and where we should reside.

There is no mention that I saw of permission to provide military aid, so it doesn’t look like this is the sign for Ukraine aid money.

Thanks for the update! Just to clarify, the sign of $1.2 billion in military aid did not specify where it was going. It could be Ukraine, but that was just speculation.

I was at one of the 156 Walmart’s that are closg this morning, 50% off everything. I went to Radio shack before that and the owner mentioned how the company had filed for bankruptcy. I met a neighbor on the way home and he mentioned that all of South West Energy, a large gas company in Central Arkansas had stopped all field operations across the country. While standing in line to enter Walmart’s I said to my friend, This is the beginning of the end times.

Awesome, Dr. Walters! Rick Joyner…close friend of late Bob Jones said militia types in the south and
locals with Sheriffs dept. will come against Feds . You could look it up —quite extensive. We win.
Need to intercede usually hits early am . WE are naturally fasting by then , I wonder if that is a reason .
MATT 24 “Little horn” grows out of ENGLAND—-Lion with Wings .. America coming out of England , same
picture? I will have to do a study !

Hello Lori, I was very weepy before Christmass… Praying for souls.. Praying for God to speak to people and turn their hearts back to Him…but today it was bussiness as usual for me and did not sense any spirit of intercession on me.

Hi Z family. It’s Friday the 22nd, I’m a joyful Nana that has been weepy all day. I sense a swift shift, again. Am I the only one?

You are not the only one Lori. We are getting very close to the timing that Denika Alston shared in a post on Nov 29 2015 called “In Two Moons and Three Days It Will Come” which is here: https://z3news.com/w/two-moons-three-days/

Lori, when I was praying in the Spirit this afternoon I felt intense sorrow and grief.

Did you know their is another space city that was built above the earth? Daniel 8;
25
“Through his cunning
He shall cause deceit to prosper under his rule;[c]
And he shall exalt himself in his heart.
He shall destroy many in their prosperity.
He shall even rise against the Prince of princes;
But he shall be broken without human means.[d]

There are many references to this one even rising up to heaven and trampling the stars and some of the host of heaven. I think the space city we paid for will be used against the heavenly host. As for the Assyrian, maybe Obama could fill that position as he created ISIS via the CIA, arms them with our tax money, and protects them at every turn. Seeing how the people of the prince to come were from the same area, (Assyria, the legion who did the majority of destruction to the temple in 70) are also the people of ISIS. It could very well be that Obama is the antichrist. I’m still waiting for confirmation in my spirit from the Lord on that issue, but it really doesn’t matter who it is. Look up He is coming for us, and that is for sure.

I don’t think the passage you quoted supports a space city, but it is an interesting perspective I had not heard before.

Regarding the Assyrian, I believe you are on the right trail. Obama is preparing a people who will one day call him their leader. I believe he will rule over the area once known as Assyria.