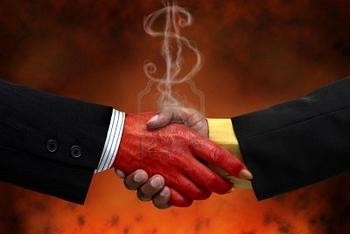 On July 29 2015, author and prophetic minister Dr. Patricia Green received a warning from the Lord about President Obama’s upcoming meeting with Pope Francis on September 23, which is the day of atonement, Yom Kippur.

Dr. Patricia Green is founder of Joy Ministries Worldwide. She has received spiritual visions of future events including a nuclear world war, a clandestine meeting of world leaders, and many other catastrophic events that will change the landscape of America.

Her warning about September 23rd was posted on the Prophecy Club website:

“September 23rd is the day Obama makes a pact with the devil. It was not by chance that the Pope and Obama are meeting on the Day of Atonement. They will make a pact that will seal the fate of the United States of America. My vengeance will be poured out from this point forward. There is no turning back.

Tell My people to draw close to Me in these last days. Tell them to purify their hearts by the washing of the water of My Word. Tell them to ask My Spirit to expose any wickedness within themselves, so they can repent and be clean.

I am returning for My Bride without spot or wrinkle. I am coming for a pure Bride. Only those who are purified by My Spirit and My Word are My Bride. There will be no pretending when I return. Many will say, “LORD, LORD, did I not prophesy in Your Name, heal the sick, cast out demons, and bring people into Your kingdom?” And I will say to those who had impure hearts, “Get away from Me, I never knew you.”

“This is the time for self-reflection. If you judge yourself in this season and repent of your hidden sin, your sin will not be exposed to your shame. Now is the time to purify your own hearts. Now is the time before My vengeance is poured out.”

She did not say what the pact would be, but President Obama is scheduled to meet with Pope Francis at the White House on September 23rd. See my previous post: The Rise of the False Church Begins September 23-25 2015.

I can’t help but wonder if this has something to do with dividing Israel to form a new Palestinian state, but I am only speculating.

The Lord has been merciful and patient with the United States, especially considering our nation entered into a covenant relationship with the Lord from the very beginning. We were warned by the words of our first President, George Washington, spoken in his first inaugural address.

“We ought to be no less persuaded that the propitious smiles of Heaven can never be expected on a nation that disregards the eternal rules of order and right which Heaven itself has ordained.”

Words like that are now considered unlawful in America’s schools and public places. America has strayed a long way from where we started. Our only hope is to return to the Lord.

Thanks to Raul Domingues for sharing this word!

Many things are saying and misunderstanding…dates, year…about the end. but JESUSCHRIST just advice us, we must to watch and pray and not to fill of speculations that the only it gets is terrorize people. its supposed God’s plan is live inside people hearts and his Spirit takes them to him. Fearing not help but to get panicky. Thanks James for this post. God bless you!

Time to wake up America! September is National Preparedness Month. Babylon the great will soon fall and three days of darkness will follow. Receive Jesus Christ into your heart to be protected from the wrath to come! Heaven and earth will be shaken and there will be chaos on the streets so please stay inside with your family tomorrow! Get into the ark before it’s too late because you DO NOT want to be left behind. Many will have to die for their faith but will still go to heaven as long as they DON’T take the mark of the beast mandated by Obama through the NWO. All the signs are here and the Palestinians received approval by the UN to raise the flag and divide Israel. God will bring judgment to this world by 9-13 and the rapture will occur on 9-15. God bless and please click share so your loved ones can have time to prepare!

Here it is people! This masterfully done bible code video is proof that the bride is taken out of here on September 15th! This is when the last blast of the feast of trumpets will occur. Please watch this to the end so you will understand what the blessed hope is. Thank you Jesus, we cant wait to see you in your glory!

This is Your Message From God. You Have A Decision To Make Today that Will Have An Eternal Impact.

If you are a Christian please watch this video to prepare yourself for the blessed hope and may God keep you and your family safe.

The idea of a rapture on September 15 is total nonsense! “My people are destroyed for lack of knowledge” (Hosea 4:6).

Where’s the guy from Norway? that said a few days ago the rapture was happening on the 13th ?

I live in Europe.I find it very scaring to read what is going on in the world..all the refugees..and the most I was shocked by “Jade Helm”, the Fema camps,the coffins, and that 23 september is something going to happen.Some people here are scared, but most of them dont believe something is going on, and are laughing when I tell about the camps, and they tell me,its not real, well I saw a lot on internet….

James, Both Sister Barbara and Dr. Patricia Green believe the Day of God’s vengeance begins September 23. We are not appointed unto wrath or vengeance therefore, the rapture will occur between now and the 23rd.
If you don’t wish to post this please reply to me at my e-mail address below. The Day of the Lord refers to BOTH the second advent and the millennium. The Millennium begins on the 23rd according to Newton and others. The millennium ends in rebellion for a season when Satan, Gog and Megog are released and multitudes rebel. So the beginning of the Millennium can include the 7 year tribulation. It will be terrible on earth but glorious in Heaven for us. I am using your two sources to make my point. We will not be here for God’s wrath or vengeance. Dolph

People believe lots of different things, but that doesn’t mean they are right about everything or wrong about everything. If I had to agree with everything everyone says before sharing what they have heard from the Lord I would not be able to share anything. In this current age, we only see in part and know in part. I agree we will not be here for the wrath of God, as I have stated repeatedly in my posts on end-time events. However, the scriptures reveal many things that must happen before the rapture and many of them are major events that take years to unfold. I documented many of these scriptures in my post, Ten Things that Must Happen Before the Rapture. Based on those scriptures, there is no way the rapture can happen this year. I believe the first seal has been broken and was fulfilled in 2008. I believe the second seal has been broken, but not yet completely fulfilled because peace has not yet been taken from the earth as it will in the near future. After that we still have five more seals to go before the rapture, so we are not there yet.

when the world divides Jerusalem, JUDGEMENT FROM JESUS!

QUOTE FROM WASSON:
As you probably already know, Pope Francis, whom I highly suspect is the False Prophet, will address the United Nations General Assembly on September 25, 2015. They are expected to vote on a resolution, forcing Israel to live within her pre-1967 borders in order to establish a Palestinian state. This will include dividing Jerusalem, which will then be designated the capital of both Israel and Palestine. The wicked Occupant of the White House has all but promised to betray Israel by voting in favor of this. God have mercy on the righteous remnant of the United States!
http://www.newswithviews.com/Wasson/donna117.htm

I find it interesting that God is also allowing Israel to be divided just as he will soon divide the US. Whether that be politically or as prophesied geographically (earthquakes, floods) God’s intent is to send a message of disobedience and repentance……. I bring this up because few understand that the leadership/gov of Israel has become just as unrighteous as the US. They are just as vile and heartless as the US is……. God is asking BOTH to awaken.

Prophetically, there have been warnings about the judgement that will fall upon Israel. Tel Aviv is known as the homosexual capital of the World.

With the US it’s been a slow downhill slide into unrighteousness. Israel has departed/repented to God a 100 times if you read the OT. Not only was there a change in attitude from one king to the next, but many kings changed their attitude on a dime multiple times during their reign………. Interpretation: God is a VERY forgiving God.

http://www.newswithviews.com/Wasson/donna117.htm Towards the end of this article you see the meeting’s about dividing Israel. Repent … stock up … re – create The Confederate States … but beware of The Madrid Fault line.

Can someone provide a link to Paul Keith Davis’ teaching video on the internet, that can confirm the below statement, please?

Thanks for asking Mia. I figured since you were asking there are probably others who also would like more details on that so I just posted a new article about the prophetic word shared by Paul Keith Davis. Unfortunately, I do not have the video, but I know Morningstar would have that in their archives.