You are here: Home » Babylon » 1st Beast is Obama » Obama Will Soon Lock Up All Churches and Synagogues
Share this post: 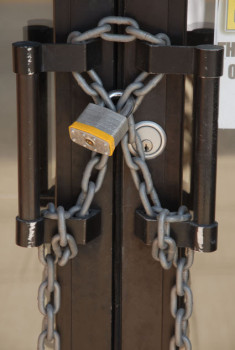 The vision of The LORD then ended. I understood two messages from this dream.

The first message that was imparted in my heart from this very powerful communication of The LORD is that the antichrist (The man of lawlessness, the son of perdition, the son of the serpent, the beast) is very soon going to be locking the places of worship of The LORD and then taking the keys. In other words, the antichrist will be coming directly against those who worship The LORD and will make several initiatives to lock them out so that they don’t worship The LORD. This means a very massive persecution of those who profess The LORD Jesus Christ is coming soon from the antichrist.

So let us serve The LORD and worship The LORD and spread the gospel of The LORD Jesus Christ now when it is still daytime, which means before the rapture, because the night, which is the Great Tribulation period, is coming when no one can work for The LORD without very intense price to pay through persecution and even murder (martyrdom).

In another vision of The LORD September 12 2015, I saw the Son of Perdition, the man who will very soon be officially revealed to the whole world as the antichrist. I saw him on an open place, and while he was in this open place, a group of people were praising him and telling him how smartly dressed he was.

In the vision of The LORD, later on the Son of Perdition moved into a house. Then he came out afterwards and he told me, “You like writing a lot of bad things about me.”

This man I saw, without much hesitation, is Barack Obama. Very soon the whole world will know his agenda; but many will unfortunately fall into his trap, which is laid by his patron, the devil: The Blasphemy of The LORD and the introduction of the mark of the beast-RFID microchip.

“Come out of her my people.” Revelation 18:4. He’s calling us out of traditional churches, out of the false religions. If you’ve already left, when they close the doors, you won’t be that upset. I will fear no evil, for you are with me!

I also had a dream in 1998, where my brother and I were locked up for being caught reading the Bible. Eventually that WILL be outlawed. Here’s a link to that dream:_______https://believeacts2blog.wordpress.com/2015/08/28/8-28-15-dream-arrested-for-reading-the-bible-in-the-united-states/

Hello,Yes I have seen in dreams a mass of house churches arising and will go back to the way the early church functioned and some will go underground if they haven’t started this process already…….All the churches can close down,but God dwells in the hearts of the people. and His word will continue to go forward……

Brother Kevin,
Baruch haba B’shem Adonai (blessed is he who comes in the name of the Lord). Welcome to Z3
Shalom

Hi Kevin. As a matter of fact, I had a word from God on this very topic a number of years ago – though I wasn’t shown who the Anti Christ was at the time. Also, I just wanted to add that over 30 years ago, I was told by God, speaking to me in an audible voice, that a certain event was going to happen ‘very soon’ – it hasn’t happened yet. I think that while it’s neat to watch for certain events coming to pass, to understand what the process is that it’s going to take to get these events here, is better still.

God spoke to me in an audible voice 14 years ago, personal things about my life…that haven’t happened yet. I’ve made a lot of mistakes along the way. I hope I’m in a more mature place now where I can wait for God to do His thing. One thing I can say about God’s voice is even though I’d never heard him before, I knew exactly who He was. Someday so will every person ever created. Every knee will bow.