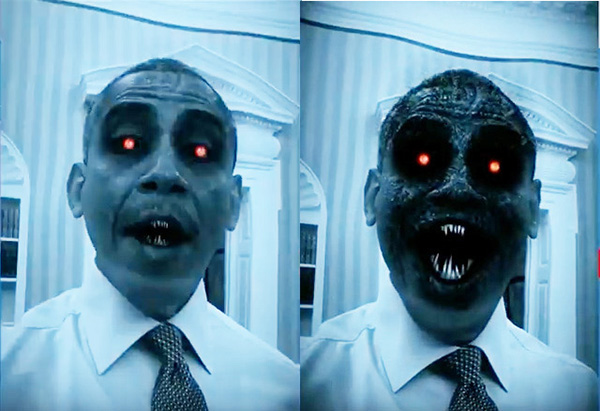 President Obama made some amazing statements in his 33-minute speech at the 2016 White House Correspondents Dinner on Saturday April 30 2016.

I believe he spoke prophetically through a series of jokes to an audience that was too spiritually deaf and blind to know he was not kidding. They laughed along as he mocked their deception.

He openly joked about his plans to destroy our Republic saying, “It is an honor to be here at my last, and perhaps the last White House correspondence dinner. The end of the Republic has never looked better!”

Of course, we know he has no intention of really ending the Republic, right?

He joked about handing the reigns of power to a woman, which is exactly what I saw in a prophetic dream. “Next year at this time, someone else will be standing here in this very spot and it’s anyone’s guess who she will be.”

Ha ha! We know he doesn’t have the authority to choose a successor! So funny and so cool too!

To socialist Bernie Sanders in the audience, Obama said, “I am hurt though Bernie, that you have been distancing yourself from me. I mean that’s just not something that you do to your comrade.” Obama a communist comrade? What a comedian this guy is!

At the 25:50-minute mark, he showed a video clip of himself transforming into a hideous beast with red eyes and sharp teeth, as shown above. Ha ha! That’s the best joke of all! Some of those crazy Christians actually believe Obama is the antichrist! Ha ha!

I believe people will look back on this video with amazement after his prophetic statements have been fulfilled and his transformation into a beast has manifested, but by then it will be too late to do anything about it.

The Washington Press was not alone in their deception. Based on the comments posted on the YouTube page for this C-Span video, there appears to be a unanimous consensus of adoration and praise for Obama, which sounds like a preview of the whole world worshipping him (Revelation 13:4). Consider these comments:

“He is so relaxed and comfortable. Just love this guy.”

“I am a white man that lives in America,  I thank God everyday for parents who taught me respect. I say to you President Obama I am very proud to call you my President.”

“Regardless of what you think of President Obama’s policies, there is no one, and I mean NO ONE, that can replace him in January of next year that will be on his level. The man is charismatic, amicable, kind, funny, and generally just embodies everything good about Americans.”

“Sheer Class – After eight years of Dubya and the degrading of the office of POTUS in the eyes of the world this man brought it back, makes the accident of history that is the Drumpf seem even more appalling, short but still appalling.”

“He will be missed for his thoughtfulness, character, and strength.”

“You can’t always agree with him but you have to agree that he’s coolest President.”

“This man promised me hope and change… and I got it in spades!”

“Aside from Bill Clinton, this man is the best leader I’ve even been able to witness in my lifetime. A wonderful human being, and a strong leader.”

“This is the most awesome president we have had.”

“I am gonna miss this president so damn much. :)”

The Lord God does nothing unless He reveals His secret counsel to His servants the prophets (Amos 3:7). I believe Obama’s speech is a great example of how the devil tries to imitate God by openly mocking and flaunting his secret plans before his servants.

In response to Obama’s “transformation” into an evil being….when the Obama’s were completely unknown to me (never even had heard their names), I was at home cleaning with the TV on in the living room. As I was cleaning away, I heard clapping and cheering, so I stopped in front of the TV out of curiosity. First Barrack walked out on the stage and then Michelle was introduced and started to walk out. Her face was that of a demonic witch and I was taken back because I didn’t expect it. I saw that face until she was mid-stage and then it changed to a human face. I will never forget that….I’ve only seen something similar one other time. Great evil is about to overtake this world that none of us can even humanly comprehend – not even true believers; however, God will give us the grace to endure until he catches us up to meet him in the air. Keep your eyes on him. Keep you heart pure. Seek his face day and night. God Bless

Comment on the picture that was used for this post. I was on Utube and listening to a video that used this same picture. It was the one on the right where his teeth are bigger and his face is more burnt up. The video was about praying and fasting and preparing because the women who put up the video had a dream about many tornadoes hitting America. They were symbolic of the many problems coming to America. Well, I hit the back button to go back to the previous video, everything went back, the video title changed, etc., but the picture of Obama wouldn’t go away. I hit the back button again. Same thing. Everything changes except the picture. I hit that back button about five times and the picture in the video stayed as Obama the antichrist, but everything else always changed. I just sat there looking at the computer screen saying I can’t believe this. This is creepy. I never had that happen to me.

I had a dream about 2 months ago. I had gone to sleep with my window open. The house was warm but we weren’t quite ready to turn the air conditioning on. In my dream I got up and looked out the window. I seen fire on the ground burning in numerous locations. I said we are under attack. I looked toward the sky and I seen fireworks going off. I then said it is the Fourth of July. I was aware of men dressed in military type uniforms walking around in the midst of the attacks. I woke up. I’m not sure if the dream is warning against a literal attack coming on the fourth. I wasn’t given a year. I also thought it is possible that it is warning of increased attacks against our freedoms or perhaps both. Anyway I felt I should share.

My car plates read 2JN 737 ~ prior to issue last august ’15, I prayed for discernment ~ initially I thought the JN referred to January but on further reflection JN may point to June. I am grateful for this site and to all of Z3 contributors. All Honor and Glory to you, Lord Christ!

Needless to say, this video was very disturbing, particularly the cell phone segment. We have a saying in our country ‘Every skin teet ain’t a laugh,’ which means behind every joke is usually the truth. James so rightfully pointed out that Mr. Obama was mocking the people at this dinner. He wasn’t laughing with them he was laughing at them. It brought even greater clarity to the visions and dreams many on this site have been having concerning this man. However, sometimes I wonder if Mr. Obama is not just a decoy or a smoke screen sent by the enemy to distract us from the real Beast. Please do not think I am negating any of what James or others have dreamt about him. It is just me pondering on all that has been said but clearly I cannot deny that what was said by Mr. Obama in this video clearly lines up with all James and others have dreamt. I do believe Mr. Obama is an agent of Satan and he has destroyed America. He is one of the worse if not the worst President they have had. Soon, we will all know the truth.

“However, sometimes I wonder if Mr. Obama is not just a decoy or a smoke screen sent by the enemy to distract us from the real Beast.”

Paula, I have wondered the same thing. I personally don’t think he is the AC of Revelations. While I do believe he’s evil and wants to destroy America, he just doesn’t seem “charismatic” enough and respected enough (from around the world) to be the one to usher in a NWO.

Here is a you tube video of Glenda Jackson prophecies of suspended elections, martial law, dollar collapse.
Things are going to amp up very soon.
https://www.youtube.com/watch?v=DjG0f8VflE4

I know I’m slow off the mark with this, God is really just waking me up now. Consider this comment at around 12 mins. Spotlight is a movie about investigative journalists who have resources, autonomy to chase down the truth & hold the powerful accountable – best fantasy film since Star Wars.

James, I don’t know how I missed this article but you are absolutely “RIGHT ON” with your assessment of O’s speech at the Correspondent dinner! I was absolutely blown away by his statements & remember thinking “this is incredible” that he would make these statements & everyone is laughing?? You are right! Deaf, dumb and blind! Thank you so much for your courage, skill & obedience to The Lord. God bless you & your family.

God has allowed this evil man to go unchecked in his dictatorship. The country has not been this divided since the civil war. God has been in the process of separation. There is no longer any middle ground. You either have your eyes open to what is happening in America and the world or you embrace the world, the evil leaders and the sin that the world promotes.
Here are a couple of my cartoons about this man of sin, that some call President.
http://www.artwanted.com/imageview.cfm?id=1381483&SGID=24857
http://www.artwanted.com/imageview.cfm?id=1369394&SGID=24857

From his words is he implying that a silent coup has taken place?.