You are here: Home » Prophecies » United States Prophecies » “There will be a nuclear bomb explode in the king’s city that will be said to be North Korean, but that is a lie.”
Share this post: 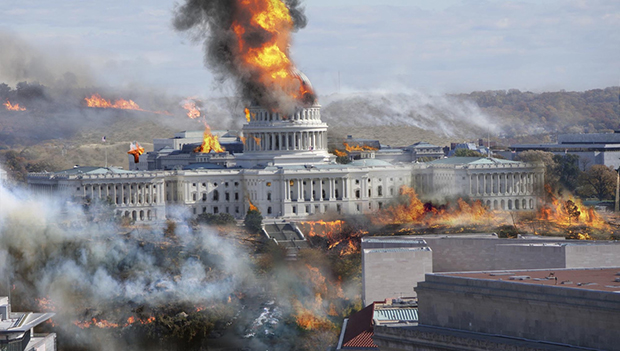 There will be a nuclear bomb explode in the king’s city that will be said to be North Korean, but that is a lie. The bomb will be Russian; however, the nation will not know that. Men in high places do know, but nothing is done about it.

Israel will be attacked from all sides and is forced to destroy Damascus with nuclear weapons because the rockets that rain down are chemical, and many of My people perish. Israel will defeat her enemies at great cost to life, but she will enlarge her borders and will declare peace and safety. The world is inflamed with hatred for Israel, including America.

My son, warn My people, the remnant, to not be so anchored in this world. I am coming soon – get ready! Tell My remnant to stay in prayer and to listen to My voice. Turn off the electronics and listen to My voice. I am speaking to all of you, but you must have your spiritual ears tuned in.

Do not listen to the lying Hananiah prophets, for they will only cause you doubt. Do not fear, for now is the time to walk in GREAT FAITH. Trust Me, saith the Lord, for I am with you always. I tell you this because I love you, and I want you to be ready.

We have crossed the Rubicon and there is no turning back. There will be a turnaround in the economy and Trump will get the blame. The “kings of the east” will have their part in prophecy but it will be towards the end of the Tribulation but God will stop it. Russia will play their part and we should watch with a serious eye. I’m embracing for serious troubles ahead. At the moment we are in a day of Grace only because of the prayers of the people have held the winds of judgment back but it will be short lived. God bless you

Thanks for sharing those insights Pastor Hale. I always pay close attention to what you share.

Speaking of economic downturn, I’m reminded of the sequence of events seen by Wilkerson in ’73: Saudi oilfields burning > economic collapse in the USA > nuclear attacks on US cities.

The first part of this dream is all about America and NKorea. We will set off the bomb in our own country, or allow someone else to do it, as justification for regime change in NK. This is a false flag to frighten the populace into supporting the military intervention. That may be incredibly cynical, but that is how empires operate, and how the US now operates on a regular basis. It is just seen as one of the necessary prices of leadership in the modern era.

Totally agree, Kevin. Wouldn’t surprise me a bit if our own country was responsible for the false flag event to gain support for their agenda.

There is also historical precedent for the U.S. instigating false flag events to start wars, including the Gulf of Tonkin incident to justify sending U.S. troops to Vietnam.

James, you might find the post on 3/12 on Shoebat.com most interesting regarding the restoration of the ottoman Empire. (Note, there are a few Catholic prophecies on some of his threads that are a bit iffy, such as “on the eve of the victory of Christ”, but on the whole his work regarding Turkey’s role is quite good). SNS

I was directed to reread a word by Byron Searle from 2016 and this paragraph stood out:

America, The Event planned for your shores will be ten times more destructive than anything you have ever seen before, for you have rejected Me and My ways and My laws.

I will allow this so-called terrorist act so that your blinders will be removed and you will see the evil that runs this system of Babylon the great. All the games, charades and political theater will be over and your leaders will be shown for who they truly are. The fire of fury that will be unleashed will be astounding, but this will only be the beginning. Even worse disasters will come upon this land that once knew Me. Your entire banking system will begin to crumble after this first event. It will falter at first and then seem to stabilize for a season and then come crashing down never to recover again. Men shall riot, loot, steal, and kill because of the lack of food. The people will cry out for protection from their government and martial law will be declared. Most will cry and weep for the days of old but they are never to return.

And what of the one who was to make you great again? I AM the Great I AM!

We are 18 months down the line from the giving of that word. It sounds like the description fo a false flag event but the mention of the word ‘shores’ made me wonder if it is actually referring to a nuclear attack.
https://z3news.com/w/relent-destruction-coming-america/

I agree with you about your dream Bryan, here is a link to my Z3 post which is very similar to yours, as the dream took place in a sub floor level in a large office building in a business district. https://z3news.com/w/prophetic-dream-reveals-nuclear-detonation-contamination/

Gotta share this dream and see if anyone has any thoughts on this. I have some revelations already but………I dreamed a woman was standing by me as we looked over a land that was barren with nothing but the dirt on the ground. There were only a hand full of people standing around a barrel. I remember thinking did something happen to the water? It didn’t know if it was a water barrel or a barrel to start a fire in. The woman stood on my right side and a little behind me so I never saw her face. She said ‘they are about to ruin the Chaldeans’. I said really? She said yeah, there’ll be nothing left.

In Dennis Cramer’s “The Next 100 Years” there’s a little chapter regarding Korea. The gist of it is, amidst the talk of a nuclear war, North and South Korea will unite “quickly and silently” in a single day, and it will be a “marriage made in heaven”. The author went on to prophesy that China will constantly harass the new United Korea, and the Korean church will have a major influence on the church in Japan. Maybe this is for a more distant future, but let’s all pray for a peaceful solution to the currently tense situation.

James, I’m not sure how this ties in but the late John Paul Jackson warned that one and possibly two American port cities would be hit with dirty bombs. He also warned that a war between Israel and Iran would be triggered by one or more dirty bombs going off in Tel Aviv (I’m pretty sure he said Tel Aviv.) One possibility is that the nuclear bomb referred to in Byron’s prophecy is a dirty bomb?? NB
For some reason I had the idea that possibly Chicago on the Great Lakes (Obama’s home town) might be one of the port targets but I can’t remember where that thought came from. All the best.

Thanks Peter. There seem to be lots of possibilities. We won’t have to wait long to find out.

While there are a number of possibilities, consider this….if the stock market is supposed to drop 50% and it’s associated with a nuclear attack on American soil (assumption), does NYC make sense? I would think the drop would be far bigger than 50% for that. And Washington DC? Ditto for that. A less strategic location like Hawaii or another smaller city…..maybe. Plus if it’s Russian, it has to have plausible deniability. A radar tracked launch from the Baltic is off the table for this scenario because nobody will think it’s North Korea (applies later?) But if Russia had an ICBM sub close to North Korea that would do it, if it has sufficient range. Anyway some ideas. SNS

SNS – that same thought crossed my mind regarding NYC – markets would simply collapse – far bigger than 50% I would think. More than that – it would destroy many financial institutions and records, nullify options and dervatives contracts – and close the trading exchanges for many months if not a year+ – in fact it would be doubtful if NYC would ever recover. Joel Skoussen, an analyst that I follow, foresees a Russsian attack (and has for years), but ony when they are strategically ready – and their weapons systems have matured. Recent demonstrations of weapons systems by Putin at the Duma – seems to suggest the time is drawing near. Skoussen also states the NK peace talks are a deception – allowing NK ‘just a little more time’ to perfect their delivery systems. Having said all this, I still do not understand ‘where a March war will be breaking out’ – which – in effect – is in the next 18 days. Perilous times.

Could be Lebanon action, which broadens into something bigger. The Israelis have made a lot of noise about this. And of course Turkeys ambitions will become endless. SNS

The New York Stock Exchange computer servers where relocated to Mahwah, New Jersey in August 2010, according to Michael Lewis in his book Flash Boys. I personally believe that the primary target is NYC, as it’s destruction by nuclear bomb and a tsunami is printed on the US currency, as was the previous destruction of the twin towers, Pentagon and the bombing of the Alfred P. Murrah Federal building in Oklahoma City (YouTube Jonathan Kleck for more information). What I find interesting is that in Revelation 14:8 and 18:2 the Bible says that Babylon “is fallen is fallen”. America actually has a city by the name of Babylon, Babylon New York is a suburb of NYC to the northeast on Long Island. Since the “is fallen” is listed twice I have always wondered if the “Babylon” mentioned in the Bible will be destroyed twice during the end times.