You are here: Home » News » National Security News » If North Korea Has Nuclear ICBM, China WILL Invade by 9/11 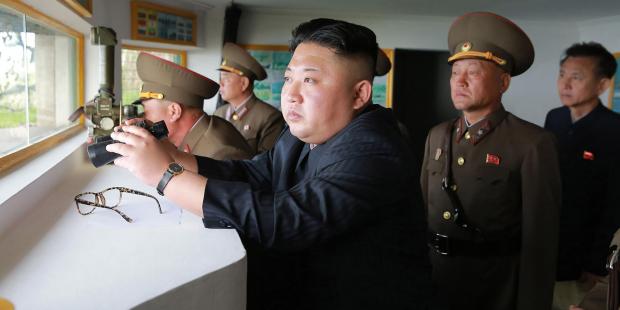 Military action against North Korea could be coming within the next week, but not from the United States. A new report shows China might be invading North Korea by September 11.

According to a DIA official assigned specifically to monitor North Korea, the secret “working” agreement was negotiated as an unofficial understanding between the two superpowers, and could result in a Chinese invasion of the Korean Peninsula between now and September 11th.

The source, who spoke to TruNews Correspondent Edward Szall through a proxy on Sunday night, and must remain unnamed due to his official capacity as a veteran member of the Defense Intelligence Agency (DIA), said both the U.S. and China are actively investigating the claims made by North Korea on Sunday, that they have successfully tested a miniaturized nuclear device and possess the technology to effectively mount it on a ballistic missile.

The source noted that if the Chinese are convinced the warhead North Korean state media showed Kim Jong-un inspecting Sunday at the “Nuclear Weapons Institute” is indeed a miniaturized homemade hydrogen bomb, they will launch an invasion of North Korea and annex it within the next week. (Source: Trunews.com)

About three weeks ago, I published a warning from economist Martin Armstrong which identified September 11-12 as key dates to watch based on his war model. His model relies on historical patterns to project future military conflicts (see the complete post). If China takes military action against North Korea in the next week, the timing would fit his model perfectly.

About one year ago, author and university professor Jim Reeve shared prophetic warnings of a future military conflict that would cause equities markets to drop sharply. He was not shown where the conflict would arise, but a conflict between China and North Korea would likely have that kind of impact (see the complete post).

Hi, james
I’m fron S.Korea
Please understand that I can not speak English and use a translator
I have been really helpful in watching z3news
Currently, helicopters are flying every day in S.korea
I always feel like a war is going to happen and it’s very scary
I live in Korea and I feel nervous every day.
James and z3 everone Please pray for korea
I have not yet reconciled to Jesus. I am always caught in sin.
Please pray for me
Thank you so much for praying
I hope that Jesus will protect you

Thanks for sharing with us Ante. The world is entering a time of shaking as God is preparing the way for the return of the Lord Jesus. Now is the acceptable time to repent from all sins and turn to God with our whole heart. I encourage you to do that today. Here is a link to more information on how to do it.

Ante， I will pray for you. In my own opinion, you are really unnecessarily dareful. God give you the free will . No matter how many people pray for you, it is still your own free will to willingly give your heart to Jesus, it is still your responsibility to open your mouth to say ” Jesus, you are my God, my Lord, my Savior. I repent all my sins. I forgive all people. Holy Spirit, please come to live in my heart and lead me to live a holy life. I am willing to change from sinning, please help me to stay away from sinning. ” To my own understanding, maybe around 2020, North Korea will really have war with South Korea. I have read Dr Owuor seeing the vision the US aircraft Carrier being sank maybe near Korean coastline by the missile rain. And at the same time, Jesus has told him that war has erupted. ( should be meaning North Korea attacking South Korea at that time . ). There are so many people have seen Jesus Christ. He is real. What are you waiting for? Kneel down in your room and open your mouth to say the above words, mean it in your heart. Receive Jesus as your saviour first, then taking care to repent your sin. When you are willingly to change away from sins, Jesus will help you. Just remember when one’s body is finished, then there is no more chance to receive Jesus. There is a daily prayer of protection , you can say it every day: the prayer of ” a wall of fire protection ” by Jeff Byerly : ” Father I come before you in the name of Jesus, I cover myself in His precious Blood and I repent of… Read more »

I’m praying for you and South Korea right now.

Dear Ante! We are ALL sinners!! We, even the most devout, faithful Christian sin and we all turn to JESUS and HOLY SPIRIT for our forgiveness and to restore us!! Yes, most definitely, we will all pray for you!! Only Jesus can give you eternal LIFE and the PEACE you seek….. Do not hesitate any longer. Kneel and acknowledge that you are a sinner and ask Him to forgive you and grant you eternal life with HIM in “paradise”….. Just like the thief beside Him at the Cross. Open your heart to Him. You will NOT be disappointed!!! May Jesus hear and answer all your prayers. God bless you.

Ante, I have prayed for you and for the people of both North and South Korea.

Let Jesus catch you in HIS love

Dear brothers and sisters in Christ, I have to share here two visions I saw this morning along with the word I received because, at present, I am inclined to believe what I saw and heard has something to do with this post. This post was not here when I received the visions and the word. And when I saw this word, I was instantly reminded of what I received this morning, which is why I am sharing the same here. I also believe there was opposition to me receiving it because when I woke up this morning, loudspeakers around my apartment were blasting out pagan chants, giving me a slight headache that made the cold I’d been battling for the last four days worse, and I could feel the Chennai heat even while sitting under a fan on full speed. It was so bad that I contemplated not spending time with the Word and heading straight to work. But I just prayed about the circumstances and decided to try to meditate and hear anything the Lord had to say to me. Meditation passage: Revelation 6:3–4 First reading: I saw when I closed my eyes, a grayish-white scene. It was windy, and something seemed to be straining to be let loose. I later felt that it was like even the wind was straining to be let loose. Something seemed to be also falling on the ground that was giving everything the grayish-white color. [The closest thing that I can think of resembling that grayish-white substance is ash.] Second reading: I saw when I closed my eyes a second time, a demonic army led by a skeleton-like demon on a horse. I don’t know if the horse was demonic. They were marching through a city, and the leader was striking down… Read more »

Possibly ash from Yellowstone erupting? A large earthquake was reported near it just recently. http://www.express.co.uk/news/science/849492/yellowstone-volcano-earthquake-supervolcano-eruption

I do think that we a close to something happening with North Korea. Martin Armstrong did specifically mention North Korea in his war cycles report. We may be on the verge of more than one war however. Tomorrow is the 10th anniversary of Operation Orchard in which Israel secretly struck a nuclear reactor in Syria. Just last week Netanyahu stated that Iranian missile factories in Syria were an unacceptable security risk. In the past, Israeli airstrikes tend to occur within a 10 day window surrounding the new moon. This allows them to strike their target from a darkened sky as the moon does not rise until the hours before dawn in the days approaching the new moon. Operation Orchard was a good example of this strategy. The reactor in Syria was struck at midnight. The moon did not rise until 3:30 AM that day. If Israel were to follow the same policy this year, the earliest date for a strike would be September 15th. Israel has been on record as saying they do not want a war during the winter, so the window for an Israeli airstrike is closing quickly for this year. The 10 day window surrounding September 20th and the 10 day window surrounding October 19th seem like the last options if Israel were to strike before winter comes. Wars and rumors of wars.

Thanks for those interesting insights Christian.

Israel has reportedly bombed a Syrian chemical weapons facility. I think we are close to the Israel conflict that is supposed to occur this year. It is possible that Shoemaker-Levy was an sign of an Israeli war breaking out in Elul of this year. There are only 2 weeks remaining in Elul, so keep an eye on Israel. https://www.theguardian.com/world/2017/sep/07/israel-airstrike-syria-chemical-weapons-facility

Another report of this and it’s significance:
(I don’t agree with his rapture position)

From ” NIKKEI ASIAN REVIEW “, Japan preparing for evacuation of tens of thousands in South Korea.

China uses North Korea to rattle the cage of the Americans. They are allied with the NK’s.