You are here: Home » News » Political News » “I will use Nikki Haley as a plumb line that will both unite and divide the nations.” 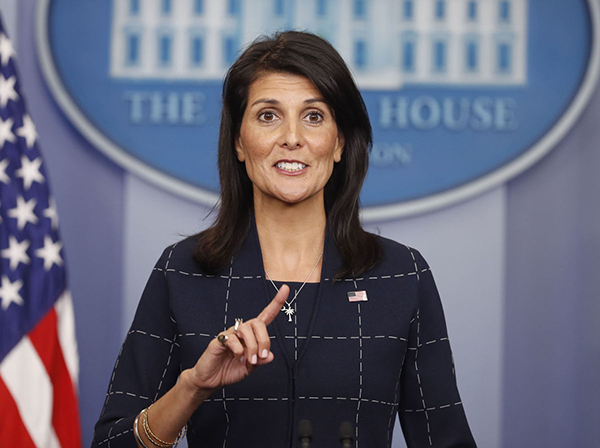 God continues to speak to me concerning Nikki Haley, the United States Ambassador to the UN. On May 30, 2016, I gave a prophecy concerning her that declared,

“You must recognize that Governor Haley from South Carolina is My Esther of the hour! My body on the east coast must stand with her, for the time is now! Open up your arms to her and do not be blind to the anointing and favor that I have placed upon her life for such a time as this” says God.

On October 6, 2016 I received another prophecy that was recorded and said,

“Governor Haley from South Carolina will be strategically used to guide and navigate her state and nation through crisis in the days ahead. She is carrying a strong Esther anointing and the intercessors will find strong favor with her” says God.

It wasn’t but several months later that she was promoted, invited, and accepted a position by Donald Trump to be the United States Ambassador to the United Nations.

Several weeks ago (January 2018), I received another prophetic dream where I saw her face on the Ace of spades as it was placed in the back pocket of a young man. God spoke to me and said,

“Nikki Haley is an ace in the hole of this nation. The Esther anointing I have given her will increase and she will receive more and more publicity in the days ahead. Look for her leadership and charisma to be a steadying force in the nations that will unite those who see clearly and warn of those who are blind. I will use Nikki as a plumb line that will both unite and divide the nations.”

I want to be clear and say that I do not believe God is specifically saying that He is raising up Nikki Haley to replace Donald Trump. Now would I be surprised if Nikki Haley becomes the first female President in the years ahead? No. Am I prophesying that? No.

What I am saying is that God is asking the intercessors and saints to keep an eye on her so that we may pray and continue to look for the manifestation of the Esther anointing upon her life. She has been strategically chosen for her role in the nations.

Jeremiah Johnson has a very dynamic and unusual ministry because he not only travels nationally and internationally as a prophetic minister, but also planted and is on the eldership team at Heart of the Father Ministry in Lakeland, FL full time. This is a thriving community of believers committed to revival, awakening, and character transformation on a daily basis.

Jeremiah’s role as a leader and a strong prophetic voice gives him the express capability of ministering to the people of God in a way that is very pastoral and encouraging. Jeremiah has a heart and passion to see believers young and old walk in their destiny and calling!

Jeremiah has been called to be a herald of Christ’s return and to declare His excellencies in the earth and to make who He is known. He is the founder of Behold the Man Ministries, which is a 501 (C) 3 Non Profit Organization.

I have liked her from the start, and pray that this is so. I look forward to God’s blessing upon her.

Nikki Haley has been in the neo-con camp and has supported the Rinos at every turn. Joe Scarborough of MSNBC is her biggest fan. Very late to get on the Trump band wagon if she ever did.

Dolph, I agree that in the past Nikki has not been as conservative on some issues as I would like, but neither was populist Trump. Since taking office, both have been big surprises to me. Trump has strongly supported many Christian issues (much more so than previous presidents) and Nikki has been a strong voice for Christian values at the UN. She supported the relocation of the US embassy in Isreal and seems far more interested in doing what is right as opposed to appeasing enemies of democracy for political expediency.
This prophecy rings true to me and I think we should give her the benefit of the doubt for now and support her with much prayer.

Brother Ken I was very active in politics from 1978 to 2005 , the first thing we have to remember is power is a powerful drug , more powerful than any other drug . I have watched Nikki a long time , she is badly addicted to power and makes herself acceptable to who ever is in power to gain power . She will do anything for power , only GOD could change this woman , it will take much prayer & HOLY SPIRIT to change her .

I agree with you, John, that power is a powerful drug. And that power can come in many forms. I doubt we can ever be truly confident that we are completely immune to the corrupting influence of power. After all, the first being who sinned was also corrupted by power, the power of his beauty.

All we must and can do is to pray for Nikki Haley, Donald Trump and all the other people in government – and then trust God.