You are here: Home » Trading » Forex » Next Big Move for USD/CHF is Straight Down

I believe we have completed the pattern shown on the graph in my previous post, USD/CHF Next Move Up. Today I saw a new graph, but before commenting on that I want to share a couple of things I learned from the previous graph.

The previous graph showed the price moving straight up, then gradually coming down, but with volatility. Just as I saw, the price moved up from .945 to .953. However, it did not move straight up like I saw. I never know whether I am seeing the 1-minute graph or the 4-hour graph or something in between. On the 5-minute graph it moved up at about 45 degrees. On the 4-hour graph it moved almost straight up, but still not quite. So I was wondering about this. Then when it reached .951 it then moved straight up to .953. Since that final move up was the only part that exactly matched what I saw, I  believe it was a sign showing we were approaching the peak alerting us to get ready to switch positions to the sell side. So in the future I will be looking for clues like that.

As I showed on the previous graph the line moving down was not straight, but had jagged moves up and down as it descended. All of the other lines I have seen have always been smooth, showing only the general direction without the volatility. So when I saw this line I was expecting to see volatility on the way down, but I did not know how much. We now know the volatility produced wide swings up and down so I would expect similar results in the future if I see another jagged line.

Along with the previous graph I shared how I saw a digital screen with the number changing from .45 to .55. That was the first time I have seen anything like that and was not sure what it meant. For now, I am not convinced it meant anything, but it might have been showing the range of movement from .945 to .955 and then back down to .945. However, I am not sure about that since it did not even show the complete numbers. Unless I get new insights about seeing digital numbers I am not going to pay much attention to them in the future.

The new graph I saw today is shown below. It is very different from any graph I have seen before. For that reason, I was very skeptical about it at first. I saw three vertical lines side by side. In the first line I could see movement as the price was dropping down. The other two lines were just solid lines. I could not see the top or bottom of any of them. There were no numbers either. 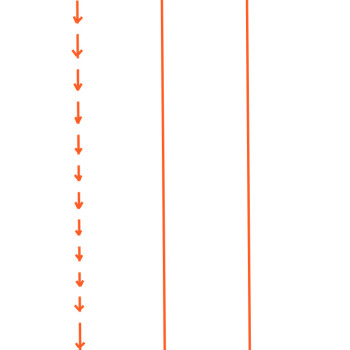 So I believe the next major move is straight down, but I don’t know how far down. However, I noticed last Friday the price moved straight up from .929 to .944. Currently the price is close to .943. So one possibility is the price could drop back down close to where it started last Friday. That is just speculation though.

I believe the other two lines show the price will eventually go back up and then back down again. So we can expect lots of volatility coming soon, which makes sense with Greece potentially missing a payment due to the IMF on June 5.

James,
The upper wick of the weekly candle starts about .945 and ends at .954

Thanks for that info. That confirms the new graph that I just posted. Regarding the graph shown in this post, the first move down happened on Friday when it dropped straight down to .935. Then it bounced straight back up just like I saw. The new graph that I just posted shows it is going to make another sharp drop before bouncing much higher. I did not see any numbers but I was already guessing it might go up close to .954 because that has been the pattern. The next drop will complete the pattern shown in this graph. Please see my new post for the next graph.

Thanks for sharing your insights. This is all very intriguing. My thought is that the Lord doesn’t want the Illuminati banksters to take ALL the chips off the table during the coming collapse. He’s making a way for his children to provide for themselves too.

I agree. I believe the Lord wants to reveal to the world that he is real, and do it in ways they understand and cannot deny. He also wants large amounts of money for his kingdom purposes, which is all about rescuing lost souls.