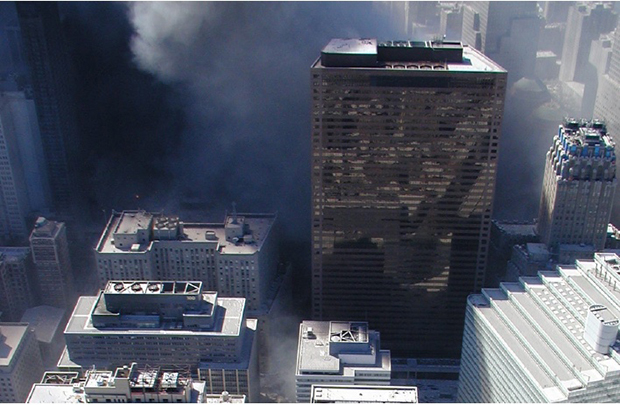 A new study has been released regarding the causes for the mysterious collapse of the 47-story building called World Trade Center Building Seven (WTC 7). After the attacks on September 11, 2001, our attention was focused on the twin towers which collapsed after being struck by airplanes. In all the drama of that day, far less attention was given to the total collapse of WTC 7 for no apparent reason. One of the last photos taken of WTC 7 is shown above, viewing it from the north with smoke coming from the south side from the destruction of the twin towers, WTC 1 and WTC 2.

A research team at the Institute of Northern Engineering, which is part of the University of Alaska Fairbanks, studied the details of the collapse of WTC 7 and has just published a 114-page preliminary draft, sharing their findings and conclusions, which directly contradict claims presented by the mainstream news media that it was destroyed by fire. The findings from the research team are summarized as follows:

The research team is currently organizing and uploading all of its data into a format that can be readily downloaded and used. We expect to post the data sometime between September 16 and September 30, 2019. (Source: ine.uaf.edu)

Their conclusion is based on lots of evidence, but it makes sense to me that WTC 7 was not destroyed by fire because if it was, then why didn’t the same fire also destroy the buildings adjacent to it, which are the Verizon Building and the U.S. Post Office? The layout of the World Trade Center complex shown in the diagram below shows all three buildings, including the Verizon Building, WTC 7, and the U.S. Post Office, were all buffered from the collapsing towers by WTC 5 and WTC 6. The U.S. Post Office building, located next to WTC 7 on the east side, received only minor damage. The Verizon Building, located next to WTC 7 on the west side, remained structurally sound and received no fire damage from the collapse of WTC 1 and WTC 2. The only serious damage to it came from the east side due to debris from the collapse of WTC 7, not due to the collapse of WTC 1 and WTC 2. 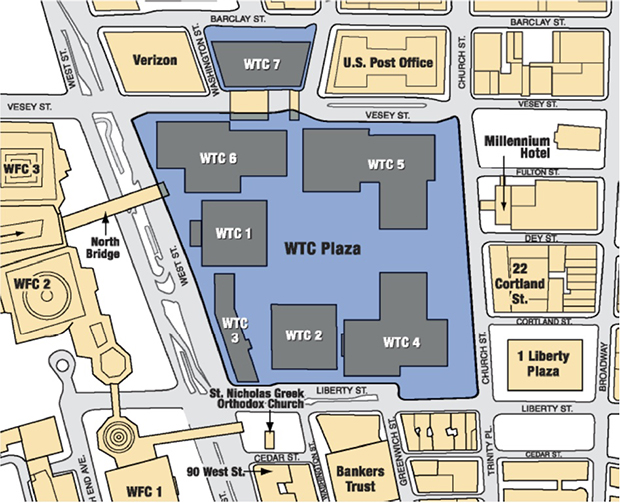 Not surprisingly, the mainstream news media has not shared the findings from this new study, despite all the evidence supporting it, which is more evidence showing they are not seeking the truth, but promoting their own agenda, which is why I believe they are fake news.

To see more evidence on what caused the collapse of WTC 1 and WTC 2, I recommend watching the 3-hour video shown below.

I don’t know if the report will say so, but the only way that could happen is through controlled demolition.

It is rather difficult to allow one’s self the idea to even remotely accept the possibility that our very own government (or Deep State Factions) was responsible for 9/11. The very first time I had such an inkling several years ago, my mind was filled with horror, then grief, then anger. Yet, the Truth must come out, and with it, whatever ugliness and evil it will uncover. My only question is will it be soon while it still matters (before we are ripped apart by domestic and/or foreign terrorists)?

It is evident that two things occurred on 9/11. First, God’s hand of protection was in the very least temporarily lifted off this nation. Second, persons within our own government had knowledge of and withheld information regarding the truth of what really transpired which of course leads to the speculation of their complacency in the least or their total involvement otherwise.

What 9/11 often reminds me of is how the “strong delusion” spoke of in 2nd Thessalonians 2:11 is not only possible but to some extent has already and continues to occur.

The truth has been out since the killing of Kennedy and everyone close to him, and our sixty-eight documented regime changes all over the world since WW2. The trouble is that the media used to actually reveal the truth, but now they only cover up the truth. There is no independent media anymore. So what is supposed to be a “fourth branch” forcing accountability on our government, is now just the propaganda arm of that same government.

Below Are The Links To Loose Change 1st and 2nd Edition

31:00 – The Lobby Was DESTROYED Of The NORTH TOWER
31:40 – The Norday (Could be spelling error) Brothers (Firefighters) inside the Twin Towers Said, “They Could Hear And See The Floors ‘Popping Out’ “Boom, Boom, Ba-Boom”

50:31 – The Passport of Satan Saqami (One of the “HighJackers”) flew out of his pocket – went through all the Fire and landed on the sidewalk and “Luckily” was FOUND!

54:33 – Experiments were made and the “CELL PHONE CALLS” have been Proven to be FAKE

Thanks Paul. I saved these links and will be watching.

If you haven’t already, look up Ted Gunderson on YouTube.. I believe the video is titled “The Great Conspiracy.” He was the former head of the FBI.

Thanks Britt. I downloaded it and will be watching soon.

I remember I watched a video a few years ago ; not sure how I originally found it ; but it was a firsthand account of one of the united airlines air hostesses ; she was a senior employee and in the video she showed enough facts that led one to believe ; she said herself that 9/11 was an inside job by I think she mentioned CIA & Mossad working together. she went under the name of Rebecah Roth.

Not sure whether the original you tube video exists still.

The tons of gold, too (it was a robbery).

She published two “fictional” books describing what happened .In the second book she describes the perpetrators getting caught.
https://www.rebekahroth.com/

After checking her website, I found that there are now 4 books. I’ve only read the first two.

My main question is, why would they need WTC7 so specifically taken out? Clearly they had some goal in mind, like a future construction already planned. The big positive of this disaster is that it enabled major improvements in the subway system under the buildings, particularly the PATH train from New Jersey, and the addition of all-new subway stations. But other than the museum and new boasting tower, the biggest change was the addition of the “Oculus”, a sprawling, multistory hub of subway, retail and public space, and who knows what else, all in gleaming white, the top of which rises from the ground where wtc5 had been, but the majority of which extends underground and to the south. It is also one of the most bizzarely-shaped ultra modern public buildings ever built, resembling either a birds wings from the outside, or from inside, an enormous eye staring into the sky. No one ever mentions the Oculus or shows pictures of it, but it is certainly the most striking, bizarre and new-agey or NWO thing now occupying the WTC site. Is it a bold, functional architectural success, or something sinister and bizarre?

Pedo evidence, and trading fraud investigations and Oklahoma bombing and stuff like that. A couple floors were building big cases but conveniently all the paperwork was transferred there. You know how it goes, just like the specific part of the pentagon, there was evidence that “happened” to be exactly where the missile hit…Just like Oklahoma, they had tons of evidence of cases ready to surface and poof…free and clear. I just saw drone footage claiming Epstein is on his island. The pic looks just like him, how he folds his arms talking to the caretaker on an ATV it looks like. They’ve got it all free and clear, no worries…

So WTC7 was definitely an FBI records building? That would make alot of sense, and is maybe establishing a common pattern for FBI corruption. We would need to establish proof that those records were moved there, and likewise in Oklahoma City. However, we know there are gold vaults under the Federal Reserve Building (US private gold) and the bank building across the street (foreign private and government gold) down by wall street, and maybe small amounts in some Brinks buildings, but where would there have been gold in WTC7? The US wouldn’t need to steal its own gold, or fake a heist, unless it was privately owned, and we heard no claims of a private gold robbery. Certainly a private or foreign govt owner would have complained very loudly about that, and rightfully so.

WTC7 was “pulled” as Larry Silverstein stated.It is said he took out “double indemnity insurance” in case of “terrorist attack” just months before and pocketed billions in the process.

It needs to be proven that he took out that insurance, that would make very good evidence of corruption.

https://youtu.be/MW-oXuJTdjI; The link to the 9/11 scene in the UK film, ‘One by One‘
It is fictional but it demonstrates, using a building blocks game (Jenga) how towers fall.
The main actor, Rick Mayall died suddenly in a car crash about a year later from unknown causes. The possibly a heart attack at the wheel was the suggested cause.

There is a British Film, made about 10 years ago, which has a powerful image of how towers fall illustrated by the game of Jenga blocks falling over as compared with how a building sinks down when it is dynamited to demolish it. I did not manage to locate a copy of the film but the clip on You Tube indicated it was about the narrative of the manipulation of events and information by unseen elites pulling the strings behind the scenes. In addition, there is the claim by an ex-commercial pilot, Mitch McConnal that Tthere is a device by which aircraft can be remotely highjacked and caused to crash, for which apparently, Hilary Clinton holds the patent. Moreover, the foreign nationals accused of committing this attack have also been said to business partners of President Bush and the delay in sealing the borders allowed the putative perpetrators were allowed to escape. Bush himself, appeared paralysed and delayed taking control of the aftermath. Finally, what was achieved by this attach, was an escalation in a climate of fear and very wide-ranging additional security measures that no control and limit our movements and travel.

At some point people in the world will get so sick of our kangaroo courts, injustice and imorality they’ll cheer as Babylon falls…Here’s a video of Epstein alive back on his island filmed 8/30/19 https://t.co/CYEqT1F2Sw

Thanks for sharing Robson. Watched the video and read the comments…there is a link to another video in the comments of the caretaker…also has white hair. It’s hard to tell but let’s hope the guy in rusty’s video is just the caretaker….

Thanks James,
I did not watch the whole video but saw the highlights. Deeply alarming. You have to wonder if what is actually shown as news is actually manufactured and not true.
Media can create much fear

Maybe next they will blow up the Port Authority bus terminal building, which is also in need of a major rebuild.