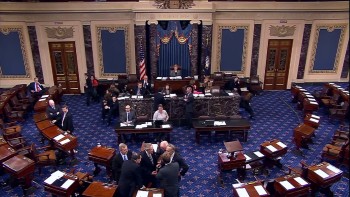 The 2016 National Defense Authorization Act has been approved by both the House and the Senate and is now headed to President Obama.

The House approved the authorization bill last week with a 270-156 vote, well short of the 290 needed to override a Presidential veto. Yesterday, the Senate advanced the bill with a procedural vote of 73-26. Today they voted again to pass it by a vote of 70-27, which exceeds the 67 votes needed to override a veto.

President Obama has threatened to veto the bill because it ignores spending caps put in place two years ago by sequestration. For a President who has spent our country into oblivion, I find it hard to believe his concerns have anything to do with spending caps. There must be another reason why he does not like the bill.

A veto would set the bill back by at least a few weeks. However, if history repeats itself President Obama will not follow through on his threat because he has threatened to veto each of the last six annual defense authorization bills of his presidency over a series of policy and budget fights, but eventually he signed all of them into law. Maybe he just likes hearing himself roar.

The President could sign the bill as early as tomorrow, but is constitutionally required to act on bills presented to him within ten days, which would set the deadline at October 17.

I am watching this bill closely because I believe it is the sign the Lord showed me back on March 1 2015. I saw a $200 million proposal for military aid was given to President Obama. Then I saw him sign the proposal after increasing the amount to $1.2 billion. That would be a sign to let us know a sudden market crash will occur soon afterwards. I shared the details of that dream in my previous post, The Event Before the Event.

The NDAA 2016 was originally approved by the House with $200 million in military aid for Ukraine. The Senate later increased that amount to $300 million. I believe President Obama will soon increase it again to $1.2 billion. Then it will be time to fasten our seat belts and prepare for a great shaking.

Paul Ryan signs NDAA..Obama to sign this week or next week. Then Obama will have his 2016 defense budget with OCO (overseas contingency operations) provisions. https://twitter.com/SpeakerRyan/status/666636447865298946. Curiously close to the November 25th time frame. Not that many days left in November for a crash to happen this year (Nov 18-20, Nov 23-25, Nov 27-half day, Nov 30). I believe if it doesn’t happen in November it’s next year (based on Mcgeorge’s dream, Edwards dream and my dreams). Obviously the crash can’t happen on December 25th. Bless ADONAI!

Obama still in Asia…therefore NDAA won’t be signed till next week. Now down to Nov 23-25, Nov 27-half day, Nov 30. Waiting to see what he does with his 2016 defense budget OCO provisions. Literally less than five trading days left in November. Bless Adonai!

I believe the proposal I saw in my dream will originate from within the Obama administration. I never saw anything to do with NDAA or Congress.

The signing of NDAA is irrelevant because it already passed both houses of Congress with veto proof majorities and goes into law automatically within ten days even if Obama does not sign it.

I think the signing of the NDAA is very significant because it gives Obama unlimited resources in the OCO funds. He has the funds to do whatever he wants, whenever he wants. I have been saying the same thing for several months. The 2016 NDAA is the defense budget, he is NOT going to pull the money from the domestic budget. The money has to be accounted for somewhere. God bless!

Here’s an article about Washington preparing to sign off on a billion dollar loan to Ukraine, could that be the 1.2 billion dollar in lethal aid? The article is dated November 14.

That is not what I saw because it is not military aid, just a loan guarantee. It is also not $1.2 billion and did not start out at $200 million. I am watching the proposal currently being prepared by the Pentagon for increased troops deployed to eastern Europe. They have not yet identified the initial dollar amount, but it has potential. I posted an article about it here: http://z3news.com/w/increased-troops-deployed-eastern-europe/

Thanks for the Kind words Phil and Joe. God bless!

Thanks Too phanuel.
Coming crash is getting closer now
God bless,
Phil

Senate passes NDAA 91-3. Now Obama has a defense budget for 2016, the $1.2 billion authorization may be coming soon. http://www.ibtimes.com/military-budget-2016-senate-passes-revised-national-defense-authorization-act-2177836. God bless!

NDAA passed the house today by a whopping 370-58…thats more like it. Now to the senate. I’m still watching this because Obama is probably be waiting for a defense budget to be passed before he unleashes his $1.2 billion in aid. This aid may not be related to NDAA, but I believe NDAA is an important marker. http://thornberry.house.gov/news/documentsingle.aspx?DocumentID=398069 God bless

Nothing is as it seems…could it be the NDAA all along? Everyone is happy in congress after budget deal. Obama will get a revised bill and will sign. Trying to get it passed in congress by NOV 11. http://www.militarytimes.com/story/military/capitol-hill/2015/11/03/ndaa-new-bill-house/75096112/ God bless

Thanks for the updates! I did not see anything about the NDAA or Congress in my dream, but if it comes through them that works fine too.

I agree James….However, I get the feeling that Obama is waiting for a budget authorization to unleash some craziness. Not necessarily the NDAA. http://www.upi.com/Business_News/Security-Industry/2015/10/22/Ukraine-to-receive-US-radars-by-mid-November/1791445542325/

Rob, I’ve been trying to get back to you, and have been thinking about what you were asking, if I had any influential teaching on dream interpretation that has pointed me in the way that I do things at the present time. You were also thinking about mapping your dreams. This could be a big post but I’ll try to keep it brief. A lot of things have influenced me. I was an active member of two online prophetic trading forums going back to 2006 and 2007. These forums exposed me to a lot of trading dreams. Some had neat word plays. Most were like what we have on Z3News. The missing ingredient was timing though. Then about two and a half years ago a few of us former members of those trading communities got together on our own and I was introduced to two people who were receiving trading revelation based on a weekly cycle. I thought that was tremendous to have revelation anchored in time! That was a breakthrough! It was John who 12 years ago started diligently writing out his dreams and comparing them to price action. He noticed that his dreams correlated to a weekly cycle. The Lord revealed on the weekend what the price action was going to do for the coming week. And weekday dreams were for that day. The Lord gives him old and new symbols in his dreams. He likes to trade options on SLV. If he doesn’t understand a symbol well enough he will just wait to see what the price action does. But he taught the group the most common symbols for buying, selling, turnarounds, as well as permission symbols and wait commands. It was his journey with the Lord. None of us on the team do it the same… Read more »

Thanks for sharing these awesome insights Carl!

Thanks Carl, that is an inspiring testimony. You’ve really encouraged me to start doing some mapping of my dreams and see what I find out. I’ve only been thinking prophetically about investing since April this year so I am very new to it all. God has given me some very clear prophetic dreams already but has been quiet for a few months now, perhaps He wants me to start unravelling the metaphoric dreams more.

what’s the effect that this has been vetoed?

I had this dream last night. I believe it speaks to things in government / politics happening undercover that have been working their way through slowly. However the end result is not what they were expecting! They think they are through but then a big bear messes everything up and they have to do a 180 and run as fast as they can. Feel free to comment also. —————— I was watching a man drive a car through a gate into a dirt drive in a rural area. It was a CIA safe-house or something like that. The man belonged there and he was avoiding many counter measures on the drive that had been installed, driving slowly and turning the car this way and that. He had a computer screen in the car showing him how to drive. He had done it before and knew what he was doing, but it looked VERY difficult! As he got through, I said something like, “well after that you expect something big to happen!” My meaning was that after all that hard work getting through the drive to come in, I had high expectation of something at the end of it all. Suddenly we turned a corner and there was a huge bear in front of us less than 10m away and he was running at the car. Time slowed down in the dream. The man spun the car around and drove away. I contemplated just how close the bear would come to the car as he spun it around and wouldn’t the bear be able to grab it? Reversing directly might be better. But then in reverse top speed is limited so spinning around first to then speed away is better. I also considered the drive coming in and he obviously couldn’t… Read more »

Very interesting. Sounds like the banksters are not as smart as they think they are! They are setting some things in motion that could easily spiral out of their control.