You are here: Home » Prophecies » United States Prophecies » “The nation will be split in two.”
Share this post: 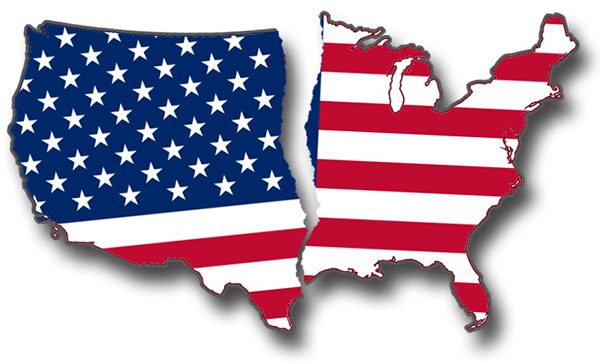 Then he who hears the sound of the trumpet and does not take warning, and a sword comes and takes him away, his blood will be on his own head. (Ezekiel 33:4)

This nation will be brought to its knees. The plans that some have made, to make this nation great, will fall to the ground in humiliation. For your sins and your arrogance will have caught-up with you on that day.

The nation will be split in two. The orders will be given to my angel that sits upon the heights of your nation. For too long, you have ignored the warnings from my true prophets.”

The Spirit of the Lord showed me a scene of the United States capitol. People were fleeing as the buildings were collapsing all around them. Above, various planes were dropping bombs. Everything was in a state of panic and confusion. And then the earth opened up, and a huge crack was seen as some fell into it, and yet some were able to reach the edge and find safety.

“The government will fail on that day. The pillars and the entire structure of the capitol will crumble. Men and women will flee so that the debris will not hit them.

And that great rift will open. There, many will fall into it. Some will climb to safety.

Stephen Hanson of In His Truth Ministries came to the Lord is a special way in 1975 and has been prophesying regularly since. In these end-time birthing pangs we are to be reminded that judgment must first begin with the household of God. Will we be prepared and ready?

We are to go to leave America and go to Israel. Just as scripture says of regathering the 12 tribes of Israel, His remnant, which will fulfil scripture. This is The Lord calling out His people to “come out of her”…. The Lord has a plan of exit just like in Exodus, the Ark, Sodom and Gamorha, for those that listen and follow The Lord.

Well remember the post on here recently that James talked about ‘Mayday’. I believe May is going to be the start of something big.

What do you guys think about shows/movies such as these scheduled to be released:

Matt I was talking with a sister today about that and she said there is no Hebrew word for coincidence .

Good point ! Does seem a bit much I agree .

May 13th is also 100 year anniversary of Our Lady Of Fatima.

Thanks brother u just confirmed what I believe

2 weeks ago i got the WORD disrupt. Then this is what I heard. I think it links with this WORD.
Nation founded on blood shed and bloodshed will be its destruction. Land is polluted.Indians , Blacks,& Whites.
We (USA) have shedded innocent blood around the world.
Disrupt
to cause disorder or turmoil in:The news disrupted their conference.

to destroy, usually temporarily, the normal continuance or unity of; interrupt:
<
RUresQreD?

I wonder if those who have prepared for those days that are coming, are those who have expatriated – I.e. have obeyed the great commission to go into all the world.

Saturday, April 22, 2017
“A REVIEW, SUMMARY AND ORDER OF “THE KICK OFF EVENT” AND SOME EVENTS THAT WILL FOLLOW” through Jeff Byerly (holyspiritwind)

Wow! I believe Jeff is spot on. What he summarizes agrees with what God has been sharing with and teaching me. May the saints prepare. All praise and Glory be to the King.