You are here: Home » Prophecies » Nation After Nation Will Fall From the Weight of the Evil 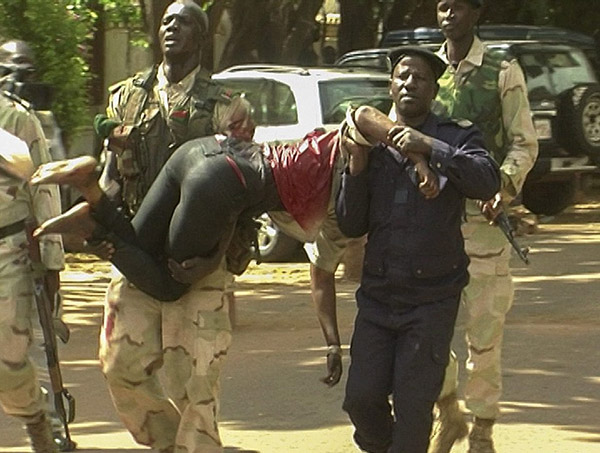 The day after the terrorist attacks in France on 13 November 2015, I received the following: “My eyes have scanned the nations. Watch My children, on the horizon comes another attack.”

Then on 20 November 2015 I read this news report: “At least eighteen people have reportedly been killed as armed gunman stormed a luxury hotel in Bamako, Mali on Friday morning. The attackers held 170 people hostage in Radisson Blu hotel, while it is reported that there are no more civilians in the hotel.” (See full report)

Then Holy Spirit spoke this:

“The rattling of chains that have held back the darkness sound across the nations. Great shaking, turmoil, rebellion. None take notice of what is happening. All fail to see the judgments being delivered. Man’s rebellion has allowed evil to grow, multiply and dominate. Idols will topple. Nation after nation will fall from the weight of the evil. Tell My children, the time is at hand.”

“Time grows shorter. What is done must be done quickly.”

“The silence among My children leaves the lost without hope. Without hope My people perish. Share hope, share the good news. DO NOT remain silent. Again and again I have said ‘speak’ – yet millions sit and soak in silence.”

In prayer regarding scripture selection for this post, Holy Spirit spoke “Jude.” Please read the Epistle of Jude shown below and seek the LORD regarding what He would have you to do.

1 Jude, a bond- servant of Jesus Christ, and brother of James,
To those who are the called, beloved in God the Father, and kept for Jesus Christ:

2 May mercy and peace and love be multiplied to you.

3 Beloved, while I was making every effort to write you about our common salvation, I felt the necessity to write to you appealing that you contend earnestly for the faith which was once for all handed down to the saints.

4 For certain persons have crept in unnoticed, those who were long beforehand marked out for this condemnation, ungodly persons who turn the grace of our God into licentiousness and deny our only Master and Lord, Jesus Christ.

5 Now I desire to remind you, though you know all things once for all, that the Lord, after saving a people out of the land of Egypt, subsequently destroyed those who did not believe.

6 And angels who did not keep their own domain, but abandoned their proper abode, He has kept in eternal bonds under darkness for the judgment of the great day,

7 just as Sodom and Gomorrah and the cities around them, since they in the same way as these indulged in gross immorality and went after strange flesh, are exhibited as an example in undergoing the punishment of eternal fire.

8 Yet in the same way these men, also by dreaming, defile the flesh, and reject authority, and revile angelic majesties.

9 But Michael the archangel, when he disputed with the devil and argued about the body of Moses, did not dare pronounce against him a railing judgment, but said, “ The Lord rebuke you!”

11 Woe to them! For they have gone the way of Cain, and for pay they have rushed headlong into the error of Balaam, and perished in the rebellion of Korah.

12 These are the men who are hidden reefs in your love feasts when they feast with you without fear, caring for themselves; clouds without water, carried along by winds; autumn trees without fruit, doubly dead, uprooted;

13 wild waves of the sea, casting up their own shame like foam; wandering stars, for whom the black darkness has been reserved forever.

14 It was also about these men that Enoch, in the seventh generation from Adam, prophesied, saying, “ Behold, the Lord came with many thousands of His holy ones,

15 to execute judgment upon all, and to convict all the ungodly of all their ungodly deeds which they have done in an ungodly way, and of all the harsh things which ungodly sinners have spoken against Him.”

16 These are grumblers, finding fault, following after their own lusts; they speak arrogantly, flattering people for the sake of gaining an advantage.

17 But you, beloved, ought to remember the words that were spoken beforehand by the apostles of our Lord Jesus Christ,

18 that they were saying to you, “ In the last time there will be mockers, following after their own ungodly lusts.”

19 These are the ones who cause divisions, worldly- minded, devoid of the Spirit.

20 But you, beloved, building yourselves up on your most holy faith, praying in the Holy Spirit,

21 keep yourselves in the love of God, waiting anxiously for the mercy of our Lord Jesus Christ to eternal life.

22 And have mercy on some, who are doubting;

23 save others, snatching them out of the fire; and on some have mercy with fear, hating even the garment polluted by the flesh.

24 Now to Him who is able to keep you from stumbling, and to make you stand in the presence of His glory blameless with great joy,

25 to the only God our Savior, through Jesus Christ our Lord, be glory, majesty, dominion and authority, before all time and now and forever. Amen.

Trimom, go back to the dream you posted, I left you a comment.
I didn’t know how to get your attention on it ☺️

I was also led to read Jude yesterday in the a.m., mainly verses 3-4 (“Defend the faith that God has entrusted once for all time to His holy people. I say this because some ungodly people have wormed their way into your churches, saying that God’s marvellous grace allows us to live immoral lives”) and verse 22 (and you must show mercy to those whose faith is wavering. Rescue others by snatching them from the flames of judgement. Show mercy to still others, but do so with great caution, hating the sins that contaminate their lives”.) NLT version. Bless you!

What a mighty God we serve. Thank you for sharing this confirmation. LORD bless you.

Thank-you Ali for all of your posts.
Thank-you, Warren, for sharing above, also.

Awesome.!. How great is our God. Thank you for sharing. LORD bless.

Awesome is our God. I am the scribe, the pen in the hand of the Author. Wanted to clarify ‘Awesome.’

I have traveled all around the U.S., to many countries of the world and have recently been to Europe, South America, and South Africa. Having friends in different countries, I also receive updates on conditions. If anyone is wondering, I can tell you this: There is a deep sense of darkness over almost everywhere I have visited. The U.S. is described very well by many writers here and elsewhere, and I will just add that when leaving and returning to the U.S. after a period of time, the fast rate of decay is obvious and leaves me with a deep sense of sadness. In Europe, there is also a sense (for many years) of the ground giving way as the civilization falls apart. People so seldom realize that life for the past half century or so was still good because we were coasting on the good works, prayers, heartfulness, and Spirit-driven customs of the generations before. Having lost their spiritual mandate, so many now believe God is only an antiquated concept and that the world, technology, their indulgences, or the government will save them. Though there are good people everywhere, one finds much insanity in Germany, terrible loss of morality in Italy, and of course, a complete loss of the Holy Spirit in much of France (after so many decades of embracing communism, humanism, existentialism, etc). As mentioned, there are excellent people and good Christians everywhere. These are the ones who are suffering the most as they watch society sink into unholiness. In Switzerland, one finds much greed and particularly a terrible, paralyzing fear among the inhabitants that closes their hearts and makes them look towards material security rather than security in our Lord Jesus Christ. Many Swiss towns give one the sense of walking through a morgue. The insanity… Read more »

Thank you John. Indeed most, including ” christians” are unprepared for what shortly must come upon the nations because of our willful disobedience and rejection of God. LORD bless.

During the late summer August-September, around the time I joined my new church, the phrase “the time is short” came to me several times, it just popped in my head out of the blue. I prayed and asked God for guidance, and received what I interpreted as two messages, the first, I woke up from a sound sleep and Ezekiel 1, then Ezekiel 1-2, came to me. Coming out of the Roman Catholic tradition I never really read the Bible, so I read Ezekiel for the first time, and was amazed by the descriptions of a nuclear mushroom cloud and fighter airplanes.
A couple to several weeks later I prayed for more guidance, and again I woke up in the middle of the night and Isaiah 24 came to me, when I read that I was pretty shaken by it.

Thank you Warren for sharing these scriptures. Indeed time is short, the harvest is plenty, but labours are few.

“Coming from the Catholic tradition” means you should read the Bible. Jesus is the word.