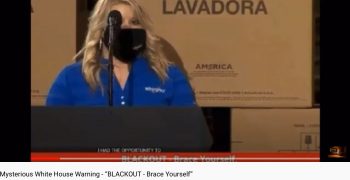 Video clip showing the phrase “BLACKOUT – Brace Yourself” which appeared on the bottom of the screen during a presentation by a Whirlpool employee at a podium in the White House with the words “America” on the backdrop. President Trump later spoke at this same podium. (I do not follow this channel which is worldly but other link provided from Christian Channel I follow was taken down).

There are a lot of strange things occurring right now with Trump & the White House which are touched upon in this video. This included President Trump’s cryptic message in Ohio that you “might not see him”, the full staff saying “goodbye” to President Trump, green material in the windows of the White House & military equipment recorded on video being moved in the U.S.

Since different regional tv stations broadcast news, it is possible that this message was broadcast in some areas and not others. If it was broadcast in your area, does that mean your area will be affected by an EMP? No one knows so best to be prepared in case.

Additionally some of the same people pointing this out are noticing Buckingham Palace looks deserted that there are questions if this is linked to the White House “Blackout” message ..who knows? Very strange times….

This is shared for informational purposes not to create fear. We know from the increase in prophetic words & dreams that there is a high likelihood of some type of chaotic event in the next 3 1/2 months. Ready yourselves & your family for different scenarios. One of these scenarios is an EMP (electromagnetic pulse). Things continue to “ramp up” and if lockdowns become more strict and/or with the shortages around the U.S., it would be wise to get your supplies now while stores are open and you have time to find and buy items you & your family may need and at prices that are likely to be lower than they will be in future months with inflation.

I do believe an EMP will occur over the U.S. and other parts of the world. One of the Economist Magazine’s covers was completely black, showing a blackout. The Economist magazine is owned by the Rothschilds and they consistently use their covers to foreshadow future events with accuracy.

I am sharing this video to give anyone who needs it, a kick in the tush to get going & get ready for life without electricity. Whether temporary or permanent is anyone’s guess… I do not think this is an immediate danger but if I had to guess a timeframe, I would guess this is likely to occur close to November & the election. An EMP will incite everything needed to help CRASH our current system & make the masses DEMAND a new system! Just imagine people’s emotions after an EMP when there is no electricity and most cars and most electronic items will not work. People receiving unemployment, Social Security and welfare through digital payments will not receive these. This will occur at a time when many people will be financially vulnerable from the devastation to the economy by COVID-19, the inflation in food prices resulting in less purchasing power for people at the store and increased tensions between political parties, different races particularly black and white and different socio-economic groups. There will be immense anger, frustration and likely violence. You will not want to be in the situation at that time to have to go out to public places any more than necessary.

“1. Get serious about having your alternative bug-out plan squared away. Do not center all your plans around having a functioning automobile — otherwise you’re breaking the sane prepper rules about tunnel vision and false assumptions.
2. Learn how to stop your car with the emergency brake. This will mean putting the car in neutral and using the handle brake to stop. Only try this in a safe environment, like a private road or parking lot!
3. While driving, be aware of any large trucks or 18-wheelers immediately behind you. They will not stop quickly in an emergency, so you’ll need to just get out of their way.
4. Know that you can still steer even if your car loses power. It will just be difficult.
5. Keep any primitive, gas- or diesel-based modes of transportation, like a lawn tractor or ATV, in good working order. These types of vehicles will almost certainly still work.
6. If you have the resources and the space, consider buying a very old car or tractor as a backup.
7. If you have a primitive vehicle with an electric starter, consider keeping a backup solenoid and learning how to install it. We don’t consider it likely that starter solenoids will be harmed by an E1 pulse, but the Soviet tests suggest they might.
8. Consider putting a smaller vehicle, like an ATV or UTV, in a Faraday cage.
9. Consider putting some smaller replacement electronics for an ATV or other primitive vehicle in a Faraday cage, as backup.
10. Have plenty of fuel on-hand, because even if your car survives the EMP it will still stop when it runs out of fuel, and the gas stations will be closed.” Source

For those of you who would not know what to do without your phone, laptop or iPad, there are solar chargers you can buy. If your water requires a pump to get the water out of the ground (I.e. a well), you NEED to have a back up plan for extracting water. You need to think about what you will do to store food without a refrigerator. Consider shelf-stable items and canned foods.

Here are some articles to help you think through the process & take some practical steps to prepare.

How to think about, protect against, and survive an EMP attack

How To Survive an EMP