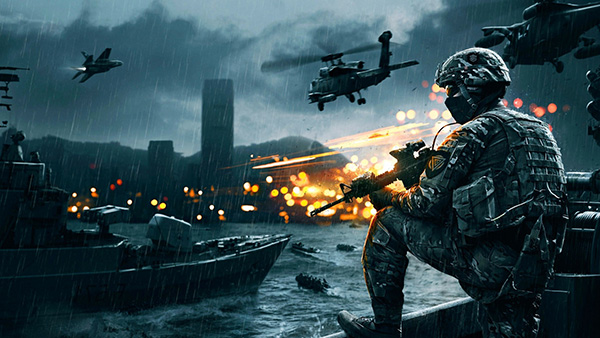 Rumors of war have increased significantly in recent weeks, especially since the UN passed a resolution on December 23 2016 to divide the land of Israel.

A growing number of prophetic voices are warning war is coming soon. On December 29, Z3 contributor Phanuel received the following prophetic word for 2017.

A lot of chaos is coming next year, because of my inheritance Israel. Pray that Trump sticks with Israel no matter what!

A war! A bad war, son. I weep for my people Israel. Recall the dream I showed you about the prophetic war…Israel attacked from all three sides. Weep for Rachel’s children, weep for them. The young sold into prostitution…O how terrible a time it will be. I don’t look forward to it, but my word (scriptures) will be fulfilled.

“Now I will rise up and judge Esau for his eternal hatred of My people and My land. My holy fire will burn them and they and their lands shall perish by fire forever, and never rise again!! The time has come to deliver My people Israel!!” (See the complete post)

“War is coming. It is at your doorstep. War will rage not just across the seas, but war will touch brother and brother. Brace yourself firmly under my wing. (Psalm 91). It is the only way.” (See the complete post)

On January 4 2017, Z3 News contributing author Marty Breeden received a disturbing dream in which he saw fireballs falling from the sky, buildings destroyed, people in a state of panic, bullets ripping through buildings, and fighter jets filling the sky.

These prophetic warnings have added significance in the context of Israel. If war is coming, it seems likely to begin in the Middle East where tensions have increased due to the recent UN resolution, which puts International pressure on them to divide the holy city. Significant historical events have happened in Israel in fifty year increments.

God has a history of orchestrating world events according to His precise timeline. Perhaps another significant event is coming to Israel this year.

“Sound the Alarm, Warn My People, The Kingdom Will Fall” through
SISTER BARBARA (Godshealer7)

Sherry
Reply to  Peggy A.

Just listened to it. What a message!

“World War 111 Could Start at Any Moment….” by DAVE HODGES (The Common Sense Show; 1/7/2017).
http://www.thecommonsenseshow.com/2017/01/07/world-war-iii-could-start-at-any-moment-crisis-in-eastern-europe/?utm_source=rss&utm_medium=rss&utm_campaign=world-war-iii-could-start-at-any-moment-crisis-in-eastern-europe

This is off-topic, but related directly to the scheduled January 20, 2017 Inauguration (from DAVE HODGES- The Common Sense Show).

Here’s one more off-topic, but of much concern regarding freedom of speech.

In the early hours of November 13, 2015 I had a dream about Israel going to war. The infamous Paris Terror Attacks would happen later that day. The dream was unusual in that I couldn’t see anything except a fog, but I know I’m having a conversation with my wife. She asks, “When will it happen?” As she’s talking the date April 5 comes to mind. Then I reply, “Tomorrow.” As I reply, the date April 6 comes to mind. She then asks, “What will they do?” As she’s talking the nation of Israel comes to mind. I reply, “Go to war.” End of dream.

When I woke up and looked at the clock I saw 3:21. A sense of “countdown” came to mind as in 3-2-1. When the Middle East started heating up last year I thought it might come true then. But now I see that since that dream things have been escalating ever since and now with the UN Security Council resolution being passed, it seems like April 6, 2017 may be the day. That date also happens to be 4 days prior to Passover, which is the date that the Passover lamb was selected.

Israel is God’s chosen child. Anyone who strikes Israel, raises a hand to do harm to God Himself. This will NOT be allowed nor accepted. This is not from the Bible or any religious text – this is MY opinion.

In the year 2015 I had a dream that my two sons and I were a top a grassy hill on a beautiful day day eating on the outside of a beautiful restaurant. It was beautiful outside so much so that in fact hundreds of people were on the grassy area having picnics. It was a picture perfect day. I distinctively remember my oldest son eating a salad. All of a sudden out of no where a 2 military jets came flying over the grassy hill and restaurant area. There were two military air force men on the grassy hill with earphones on directing the jets towards the grassy hill area. The jets were flying very low and were stationed to release bombs in the area. It was clear that something dangerous was about to happen.What was amazing is that out of all of the hundreds of people that were having a picnic on the grassy area only a few got up to leave and take shelter. Visually it seemed as if about 500 people were out having family picnics, but only around 25 people got up to seek safety. I looked at both of my sons and said, “We have to leave now.” My oldest son said, ” What about my salad?” I said to him, “put it in a to go container we have to leave now!” Then I woke up. I just remembered this dream as I started to read this post. I looked back at a book where I wrote dreams down in and I dated this dream May 25, 2015. I believe we are at the time now where we must take heed to the dreams, visions, and visitations that the Lord is giving so many of His people. May God bless all of His children. Amen.

Thank you MVP for sharing this important dream.

“PROPHETIC: HOOVER DAM STRUCK BY SPACE OBJECT and TERRORIST ATTACK IN D.C.” through KIM WEIR. No specific dates given.

This morning I finished the intro to Mike Bickles’ new book, Gods Answer To The Growing Crisis: A Bold Call To Action In The End Times. Mike relays the narrative from the life of Reese Howells, who with his company of student intercessors was given to intense warfare during the battle of Dunkirk, also known as the Miracle of Dunkirk, where 338,000 troops were rescued over a period of 9 days battle ending on June 4. The last movie trailer I saw was for “Dunkirk”, to be released this summer.

It seems a time of intense intercession will soon be upon us.

Thanks Frank. It sure sounds that way.