You are here: Home » Prophecies » End Time Prophecies » Birth Pangs » Outside of this mountainous retreat, there was great persecution of true believers.
Share this post: 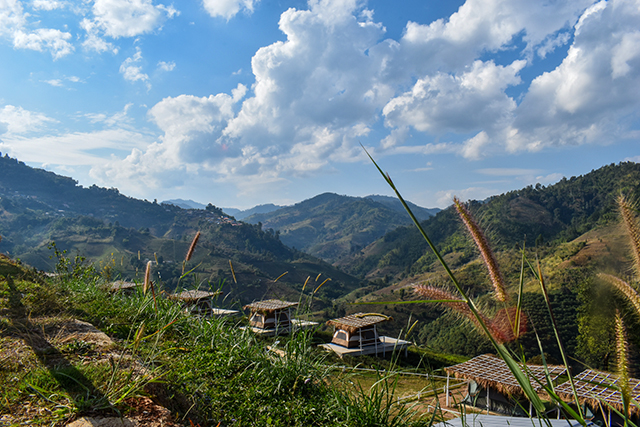 I have had dreams and visions since I was a kid. Now, at age 70, many have come to fruition. I have seen civil war, nuclear destruction, economic dislocations, civil disorders, war involving Iran, destroyed cities, and more.

That being said, I received the following dream over twenty years ago and it has continually replayed in the last several months. After reading the dreams posted recently by Jazzy, I felt that I should share this one. Most definitely, her dreams are authentic.

In this dream, I arrived at a “blessed area” in a mountainous area with only a backpack. I was led to this rural area before by the Holy Spirit, and I was welcomed there with love and compassion. I had to flee with nothing and felt somewhat nervous and guilty; nonetheless, I was made to feel comfortable, and it appeared as though they had expected me. I knew that I belonged there. There were people representing a host of diverse ethnic groups bound together in love. There were also some buildings, tents, etc (essentially the basics).

In essence, yes there will be certain “blessed areas” in the near future where the Lord will provide protection, sustenance and guidance. Outside of this mountainous retreat, there was great persecution of true believers, and it was highly dangerous.

I know that this dream is now rapidly coming to pass. Incidentally, there will be a brief calming period after the civil war, etc, and some areas will be a bit safer than others before a recurrence of more events worse than those seen previously.

David Compton is a retired high school teacher who taught English, US history, US government and economics. Since he was very young, the Lord has given him many dreams and visions, but he lacked understanding of these things and learned the hard way to keep quiet about it. Due to being fed up with his peculiar life, he stayed away from the Lord for many years and lived in the world as a serious bodybuilder and occasional actor. Then some years ago, the Lord called him out of his “worldly pursuits” and anointed him for a prophetic ministry.

thank you david for sharing this. i know from God He has prepared many blessed areas for our safety when the time comes. every day we get closer. God is with us thru the storms. prayers for everyone.

The picture chosen for this post reminded me of a dream I had 3/11/19, I saw a little girl being taken by a woman to the top of a mountain. It was very green and lush when I looked at the mountaintops. An older woman with long, white, curly hair got up from a seat that she was sitting in to greet the girl with a smile and a clear gummy bear. The older woman seemed to be watching over/caring for people in beds with a primitive cloth tarp over them. I saw a flash of a chicken coup and began to wonder if people were sick from a virus or bacteria from chickens because I seemed to be looking at a makeshift infirmary. I knew that down the mountain others were living peacefully but sick people were taken up the mountain. If they died, they were taken down the back of the mountain. If they recovered, they were taken down the front. I woke up wondering if I was the woman who had escorted the little girl up the mountain or the older woman who greeted the girl with the gummy bear. I had peace about the dream even though I knew there had been much death.
I’m currently 44 years old with long, curly hair. It would take me a bit to get that white hair if I was the older woman but with every new white hair that I notice, I think of that dream. I’m grateful that our loving God has these places already prepared for those who will need them.

Joel H
Reply to  Melinda B

Your dream reminds me of John Paul Jackson’s prophecy of two pandemics coming. “The first one(Covid) will be primarily fear based and not that bad. But the second one; the second one will be much more deadly.”

Joel H, first of all, thank you for posting John Paul’s prophecy about the second of two pandemics coming ! This ‘2nd’ pandemic coming is , I believe, not going to be coming from outside of the US, or of ‘us’ but will be coming from the vaxxed ones whose bodies have been hijacked by the operating system now injected into them…allow me to briefly explain and then I’ll see if I can relocate the video explaining this in greater detail.
This jab which injects the mRNA acts as a beneficial blessing from the gods like the gift to Troy which the people willingly brought through the gates into the city, celebrating and relaxing after the fear and war had drained them to the point of exhaustion. (Much like the world today where the unsuspecting and naive are rolling up their sleeves for a jab so they can return back to normal life in the misguided belief that end times are not here now). The problem is it’s loaded with a program which hijacks the cells’ own protein and energy production and repurposed for whoever ‘they’ are who did the original programming – and it’s certainly not for the health and well-being of ‘us’ !! [[ Just like the star trek episode where Kirk was hijacked by the ‘Borg’ ]]
The bottom line:
The vx’d ones will be producing and making proteins and viruses the world has never seen and will be infecting those of us who have not been corrupted with it and this 2nd pandemic which starts in about 3 months (to ~18 months according to Dr Sherri Tenpenny) will become the zombie apocalypse we’ve heard about. Those of us who have not been jabbed must be isolated FROM the vaxxed ones – this is going to be the fulfilling of the scriptures which states
Luk 12:51 – Suppose ye that I am come to give peace on earth? I tell you, Nay; but rather division: 12:52 – For from henceforth there shall be five in one house divided, three against two, and two against three. 12:53 – The father shall be divided against the son, and the son against the father; the mother against the daughter, and the daughter against the mother; the mother in law against her daughter in law, and the daughter in law against her mother in law. —— We are already seeing this happening now

This is not the exact video I was thinking about but Dr. Sherri Tenpenny does explain it well here: https://www.dailymotion.com/video/x7zfm6x

I had no idea that Captain Kirk had been “assimilated” by the Borg?? Haven’t seen that particular Star Trek episode. But if my memory serves me; wasn’t it Captain Picard that was hijacked from the Enterprise by the Borg? He was “assimilated” and his new name was LACUTUS (not sure of the spelling) Please correct me if I’m incorrect concerning this.

You are correct Dottie..