You are here: Home » Prophecies » “Within Three to Six Months Total Chaos Will Envelop America”
Share this post: 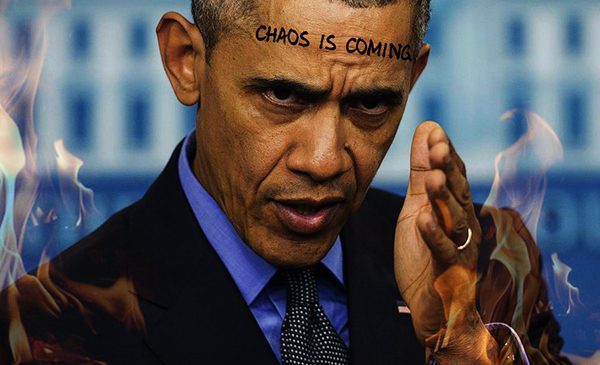 At 1:45 am yesterday morning, I received a visitation from the Lord. I first found myself at a press conference. The conference contained about fifty people. We were all sitting at long tables in horizontal rows. I was located at the second seat in the last row, on the right.

I saw Donald Trump sitting among the people; he was the only person in the crowd I recognized from behind. I only saw everyone’s back from my view. In the front, I saw Obama pacing the floor. He seemed very agitated. He started saying, “They’re pushing me…they’re pushing me to cause drama!”

The man, that seemed to go by the name “Kevin,” frantically grabbed his notepad and began to write on it. It was then that I looked on Obama’s forehead, and noticed there was writing on it. It looked as though someone had taken a black sharpie and wrote across his forehead; it said, “Chaos is Coming”.

The scene changed, and I next found myself in a room. Ahead of me, about thirty feet, stood Jesus. He was clothed in a simple white robe that illuminated a soft white glow. His face was so clear; clearer than I had ever seen it in all the years he’s visited me. It was like I zoomed in on His face. I studied His thick, dark-brown hair that rested on His shoulders, and the fullness of His beard. The expression on His face was that of sadness, yet stern. I noticed there were tears streaming from His left eye. Within each tear, there was a fetus. The Lord spoke to me, but without moving His lips. He said, “They are constantly stealing the life that I have given.”

He paused for a moment, then continued, “There are those who are even unaware of their murder. Doctors have convinced some that this is their only choice; that the child is deformed, or will be born with abnormalities, so they steal the life that I have given.”

I thought to myself, “But there are only fourteen angels”. Then Jesus quickly reminded me that the first seven seals are opened by Him.

Jesus then looked at me and with a stern voice said, “Within three to six months, total chaos will envelop America, and a pandemic will spread across the world.” He then gave me understanding that the two events are separate, and I wasn’t given a time frame for the pandemic.

I began to pray for the Bride, I prayed for wisdom and boldness. The Lord then spoke and said, “Psalm 12 for the chosen, for the obedient, and for the faithful”.

This is a warning for the church, the Bride, and the nation. We need to prepare spiritually and physically for what’s about to be unleashed.

1 Help, Lord, for the godly man ceases to be, for the faithful disappear from among the sons of men.
2 They speak falsehood to one another; with flattering lips and with a double heart they speak.
3 May the Lord cut off all flattering lips, the tongue that speaks great things;
4 Who have said, “With our tongue we will prevail; our lips are our own; who is lord over us?”
5 “Because of the devastation of the afflicted, because of the groaning of the needy, now I will arise,” says the Lord; “I will set him in the safety for which he longs.”
6 The words of the Lord are pure words; as silver tried in a furnace on the earth, refined seven times.
7 You, O Lord, will keep them; You will preserve him from this generation forever.
8 The wicked strut about on every side when vileness is exalted among the sons of men. (Psalm 12:1-8)