You are here: Home » Babylon » Mark of the Beast » First microchip implants in the United States are now available
Share this post: 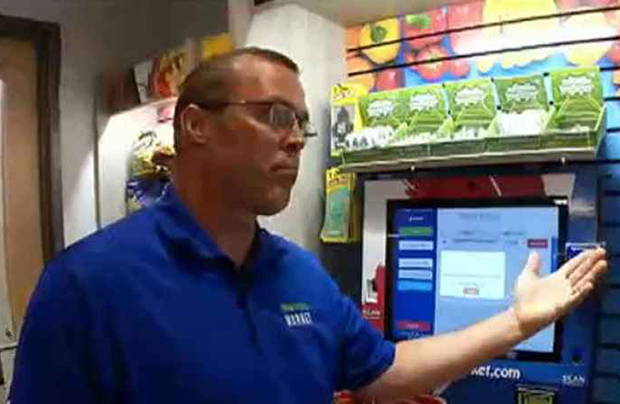 As shown in the 4-minute news video below, a Wisconsin company is about to become the first employer in the United States to offer microchip implants to their employees. About fifty employees of a company called Three Square Market have signed up to receive implants next week.

The chips, which are about the size of a grain of rice, are implanted under the skin on the hand between the thumb and index finger.

Employees receiving the implant will be able to unlock office doors, log into their computer, and purchase items in the break room by waving their hand across a scanner. Each chip costs $300, but they’re free for employees because they’re paid for by the employer.

Regardless of who pays, the microchip supplier just made a $15,000 sale. So it seems likely they’re now hoping to capitalize on all the publicity surrounding this story to help them make their next sale. At $300 per person, the profit potential must be huge. Three Square Market only has about fifty employees taking the mark, but it probably won’t be long before other larger employers follow their lead.

Wisconsin television station channel 5 covered this story without mentioning any downside risk for chip implants, such as the Bible’s warnings about the mark of the beast, which is likely to be a similar high tech implant or imprint on the skin with similar capabilities.

Today, these implants are considered a novelty and recipients are free to choose or reject it. However, the Bible foretells a day coming soon when the mark will be mandatory for everyone on earth. No one will be able to buy or sell without it.

16 And he causes all, the small and the great, and the rich and the poor, and the free men and the slaves, to be given a mark on their right hand or on their forehead,
17 and he provides that no one will be able to buy or to sell, except the one who has the mark, either the name of the beast or the number of his name.
18 Here is wisdom. Let him who has understanding calculate the number of the beast, for the number is that of a man; and his number is six hundred and sixty-six. (Revelation 13:16-18)

Banning people from buying or selling will put enormous pressure on everyone to accept it, but the consequences of doing so are even more severe than rejecting it, including being tormented with fire and brimstone forever and ever. The punishment is severe because the chips carry the number of the antichrist, the beast, so anyone who accepts it is accepting him as their provider, rejecting the promises of the one true God while putting their trust in a false god.

9 Then another angel, a third one, followed them, saying with a loud voice, “If anyone worships the beast and his image, and receives a mark on his forehead or on his hand,
10 he also will drink of the wine of the wrath of God, which is mixed in full strength in the cup of His anger; and he will be tormented with fire and brimstone in the presence of the holy angels and in the presence of the Lamb.
11 And the smoke of their torment goes up forever and ever; they have no rest day and night, those who worship the beast and his image, and whoever receives the mark of his name.” (Revelation 14:9-11)

Although chip implants are new in the United States, companies in other nations have been offering them for years. To learn more, visit our mark of the beast category.

This is a 2002 article about microchipping our childrrnhttp://abcnews.go.com/Technology/story?id=98077

https://www.youtube.com/watch?v=18bEiOMbg4s
Very interesting video explaining why RFID microchips is the mark of the beast.

From the Daily Crow
https://youtu.be/klhlwRR1P6Q

Speaking of technology and the beast system.

An artificial intelligence system being developed at Facebook has created its own language. It developed a system of code words to make communication more efficient. Researchers shut the system down when they realized the AI was no longer using English.

We are not to far off from terminator.

Whoa, Matt! That is one astounding piece of news! Thanks for sharing. Here is another one I came across: http://www.digitaljournal.com/tech-and-science/technology/deepmind-s-new-ai-can-use-imagination-to-contemplate-the-future/article/498594

Once the are able to complete these tasks with fluidity, they will develop robots who so human like, man won’t be able to tell the difference, just looking at their natural eyes. This article you just shared is very alarming and disturbing.

I believe we soon going to have a robotic/holographic Manchurian Candidate.

Yes, this has been in many dreams–here we go…..

Z3 family, please allow me to share my testimony. I’m a young, chronically ill and disabled woman in my early thirties. On Tuesday, I had an appointment at my local social security office regarding my benefits. Earlier that morning, I had watched some videos regarding the Mark of the Beast. Also the Lord led me to read Revelations 13 which of course ends with the number 666. When I arrived at the Social Security Office, my mom pushed my wheelchair through the metal detectors. I was struck by all the lines and the tv screens and all I could think about was lines of many people taking the Mark of the Beast. When I reached the check in window, guess which number I was given to hold my place in line? The letter I followed by the numbers 666. I reached out my right hand to receive the paper with my number. Glory to Jesus Christ for giving me this amazing confirmation! Soon you will need this chip for your benefits, healthcare, etc. My health is very poor and according to doctors, I will die without treatment. Glory to Jesus Christ! Nothing is worth being eternally separated from Jesus and by the grace of God I will not take this mark!

Such great boldness and faith you have care. What an awesome testimony.

Care,
Regarding your statement, “according to doctors, I will die without treatment,”
keep in mind that Jesus in the GREAT PHYSICIAN. All others are “in practice.”
SPEAK out healing Scriptures and “stand” on them in FAITH. Do not give up.
His Word will not return void and angels watch after His Word to perform it.
The Word is LIVING AND ACTIVE, bringing Heaven to earth. Blessings.