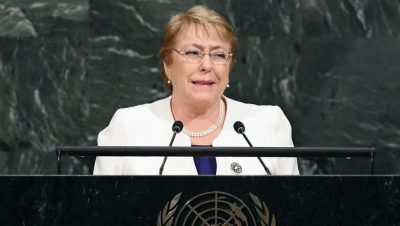 Recent remarks by UN Human Rights High Commissioner Michelle Bachelet, make clear she now openly supports organized crime in Nicaragua financed by the United States and European Union governments. That she does so comes as no surprise to anyone who has followed her earlier record of bad faith reporting on Venezuela and Nicaragua.

Her latest remarks derive directly from false reports on Nicaragua produced by the team of officials from her office that visited the country in 2018. Those officials failed to comply with the formally agreed terms of their visit, never interviewed victims of the coup activists’ wholesale terrorist violence, but still falsely claimed the violence in Nicaragua in 2018 resulted from disproportionate police repression of peaceful protests. Among the great majority of people in Nicaragua and Venezuela, UN High Commissioner Bachelet and her colleagues responsible for the dishonest reports on which she has based her repeated attacks on those country’s governments, have zero credibility.

In Nicaragua’s case, in 2018 the country suffered a vicious, violent failed coup attempt, lasting from April 18th to July 17th of that year, aimed at overthrowing the country’s elected government. The coup attempt was planned, organized and financed by the United States government and its European allies. The Office of the UN High Commissioner for Human Rights and the Inter-American Commission for Human Rights purposefully dissembled the human rights consequences of the coup attempt, covering up the widespread terrorist violence it involved. Their representatives told the Nicaraguan authorities that they classed opposition violence as common crime falling outside their remit. When the Nicaraguan authorities then prosecuted those crimes, Bachelet’s office and the IACHR immediately cynically claimed the prosecutions were political, as they continue to do.

Few observers expect impartial reporting from the Organization of American States and its component institutions, like the IACHR, because they have been permanently co-opted by the US government since the founding of the OAS in 1948. Of more concern is that the office of the UN High Comissioner for Human Rights is now self-evidently as corrupted as other international bodies that have been similarly co-opted by the United States and European Union governments, of which the most egregious recent example has been the Organization for the Prohibition of Chemical Weapons (OPCW) and its false reporting on Syria. Michelle Bachelet’s remarks in her declaration to the 47th session of the UN Human Rights Council, apart from being mostly factually false, in effect seek impunity for crimes committed by US and EU funded individuals and organizations in Nicaragua in violation of both domestic and international law.

In terms of domestic law, Nicaragua’s Constitution explicitly obliges its citizens in Article One:

“Independence, sovereignty and national self-determination are inalienable rights of the people and foundations of the Nicaraguan nation. Any foreign interference in the internal affairs of Nicaragua or any attempt to undermine these rights is an attempt against the life of the people. It is the duty of all Nicaraguans to preserve and defend these rights.”

Likewise, the Constitution’s Article 24 establishes  the duty of all citizens to respect not only their obligations to the nation but the rights of others in Nicaragua and among humanity in general:

“Every person has duties to the family, the community, the nation and humanity. The rights of each person are limited by the rights of others, by the security of all, and by just demands for the common good.”

Those fundamental provisions in the Constitution of the Republic of Nicaragua have been elaborated and expressed more strongly and in more detail in subsequent national legislation and also via the ratification by the Nicaraguan State of numerous international legal instruments. Among many others, the international measures relevant to the recent arrests of people involved in organized crime in Nicaragua include the UN Convention against Transnational Organized Crime, which came into force in 2002 the same year it was ratified by Nicaragua, the 1999 International Convention for the Suppression of the Financing of Terrorism  and other instruments related to specific forms of terrorist crime such as the 1979 International Convention against the Taking of Hostages.

Among Nicaragua’s domestic legislation relevant to Bachelet’s false accusations of lack of legality in the actions of Nicaragua’s authorities are :

The UN Convention Against Financing Terrorism dates from 1999, President Enrique Bolaños (qepd)  decreed Nicaragua’s ratification in 2002  via Decree 3287, thus committing the country to adopting the recommendations generated by the operation of that convention. As explained by Javier Morazán, then Director of the Special Unit against Organized Crime of Nicaragua’s Public Prosecutor’s Office in a 2018 interview, Law 977 was passed in July 2018 precisely so as to enable Nicaragua to comply with the demands under the convention of international organizations like the Latin American Financial Action Group (GAFILAT) to control money laundering and associated criminal activities.

In her latest declaration on Nicaragua to the UN Human Rights Council, Michelle Bachelet referred, in the very selective and dishonest way typical of her office, to just part of this broad and deep legal basis for the arrest of  the individuals currently under investigation by the Nicaraguan authorities. She falsely claimed the arrests were related to to the electoral process currently under way leading up to Nicaragua’s general elections scheduled for November of this year. Among her many completely false accusations, she claimed incorrectly that two political parties were arbitrarily denied permission to participate in the elections, when in fact those two parties had explicitly and flagrantly violated long standing electoral law.

Bachelet used that egregious falsehood as context to be able to claim, also falsely, that the recent arrests of people involved in money laundering, collusion with foreign powers to destabilize Nicaragua’s economic and social well being and breach of regulations relating to non profits, are an unlawful abuse related to the electoral process. In fact, a glance at the provisions of both the relevant Nicaraguan domestic law and the international instruments to which it is a signatory show that her claim is at once grossly misleading and ultimately extremely sinister.

Five of the various people recently arrested, Cristiana Chamorro, Arturo Cruz, Felix Maradiaga, Juan Sebastian Chamorro and Miguel Mora had expressed their aspirations to run as presidential candidates but none of them are members of any of the seventeen political parties eligible to take part in the elections. Among those detained only two minor figures are members of legitimate political parties. Some of the five individuals mentioned represent marginal opposition movements in Nicaragua like the National White and Blue Unity movement or the Civic Alliance movement both of which are funded and supported by foreign governments, agencies and foundations. All of them are individuals with a long record of collaboration with US and European governments and agencies funded by those governments and by foreign corporations. Their relationship with foreign governments and agencies de facto rendered their aspirations to be presidential candidates moot, as Nicaragua’s Supreme Electoral Council explained in a communiqué on the issue on June 3rd this year.

This means very explicitly that Michelle Bachelet’s claim that the arrests were meant to stop the individuals concerned running as election candidates is egregiously false, like practically everything else she affirmed in her remarks. Even if they had not been arrested no political party could have presented them as candidates either for the presidency or for the legislature. It should also be noted in the case of Nicaragua, that Michelle Bachelet is defending several individuals responsible for promoting the following actions in 2018 which the UN office on Drugs and Organized Crime define as terrorism and organized crime:

Furthermore, the 2018 coup activists, organized and financed by several of the individuals whom Michelle Bachelet is supporting, routinely took hostages in violation of  1979 International Convention against the Taking of Hostages which is a terrorist act. The convention defines a hostage taker as “any person who seizes or detains and threatens to kill, to injure or to continue to detain another person in order to compel a third party, namely, a State, an international intergovernmental organization, a natural or juridical person, or group of persons, to do or abstain from doing any act as an explicit or implicit condition for the release of the hostage”.

Similarly, in relation to the organization and financing of the 2018 coup, the UN Convention against Transnational Organized Crime defines organized crime as “A structured group of three or more persons, existing for a period of time and acting in concert with the aim of committing one or more serious crimes or offences established in accordance with this Convention, in order to obtain, directly or indirectly, a financial or other material benefit.” Among the Convention’s definitions of transnational organized crime is any offence committed in one State but when a substantial part of its preparation, planning, direction or control takes place in another State. All these definitions apply to the violent crimes of the US funded Nicaraguan opposition in 2018, which Javier Morazán also described in the interview he gave in 2018.

Likewise, within the framework of the International Convention for the Suppression of the Financing of Terrorism, a person commits a criminal offense if they: [B]y any means, directly or indirectly, unlawfully and wilfully, provide or collect funds with the intention that they should be used or in the knowledge that they are to be used, in full or in part, in order to carry out: […] (b) Any other act intended to cause death or serious bodily injury to a civilian, or to any other person not taking an active part in the hostilities in a situation of armed conflict, when the purpose of such act, by its nature or context, is to intimidate a population, or to compel a government or an international organization to do or to abstain from doing any act.”

Michelle Bachelet not only gave false witness to the UN Human Rights Council by falsely linking the recent arrests in Nicaragua to the country’s electoral process, she also carefully omitted the highly relevant Amnesty Law 996. Article 3 of that law states “The persons benefited by this Law must refrain from perpetrating any new action that may result in repetitive behavior generating the crimes contemplated herein. The non-observance of the principle of Non Repetition will result in the revocation of the benefit established by this Law.” Several of the people currently arrested and being investigated by Nicaragua’s authorities benefited from that Amnesty Law and may be found to have violated the law’s condition of non-repetition.

Overall the various people under arrest are accused of different charges. Some have to do with breaking the law regulating the activities of non profits, some over collaborating with foreign powers to damage Nicaragua’s economic and social stability,  some in relation to money laundering and other financial malfeasance, and some have to do with violating the terms of the 2018 Amnesty law. The complete formal criminal indictments will be known as and when the current investigations are completed.

Michelle Bachelet’s recent remarks confirm that she not only denies Nicaragua’s right to defend its sovereignty, independence and self-determination against foreign intervention. She also supports individuals and organizations demonstrably involved in organized crime and terrorism financed by governments, agencies and foundations of the United States and the European Union. Bachelet has once again made very clear that a principal function of her office is to subvert the sovereignty of nation states at the behest of Western governments and corporate elites determined to suppress genuine popular movements and destroy revolutionary governments in Latin America and the Caribbean and elsewhere.