You are here: Home » News » Jesuit Agendas » National Security News » Meteorites Are Falling All Across the United States and Canada
Share this post: 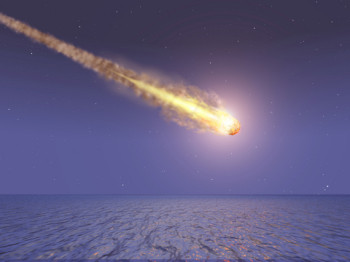 On February 15, the largest meteor in the past hundred years fell in Russia, injuring about 100 people. Now there are reports of meteors landing all across the United States and Canada.

As reported by all the major news media, the massive meteor that hit Russia was 55 feet in diameter and weighed about 10,000 tons, which is about 20 million pounds. It unleashed more than 30 times the energy of the Hiroshima atomic bomb, which was dropped on Japan in 1945.

Since then, dozens of new meteor sitings have been reported from people across the United States and Canada.  Most of the reports came in on February 21 from California and other western states. The following are samples from those eyewitness reports:

Feb 22 – Alan, Boulder, CO
Driving north, saw flash through my windshield. Unusual in that it wasn’t dark yet. Yellowish red streak. Thought it might be a greater event in Wyoming or Montana, given its heading.

Feb 21 – HS, Century City, CA
Was short just a few seconds – truly amazing, I was facing west and it was above to the right appearing to head north east or just north. No sound. Maybe greenish in color but large and bright like a single firework almost but large and w tail and very clear looking- I knew straight away not just a shooting star – bright then disappeared. Very bright like brighter than a firework – sun brightness but in night sky. I think there was maybe some fragmentation with the tail. Was not small. I looked around to see if others saw it but was driving so it was hard to tell.

Feb 21 – Andy G, San Juan Capistrano, CA
Flourescent green, no sound. As bright as a firework seen up close. This was so close to me that it literally filled up my field of vision while driving, as if someone had launched a firework a few hundred feet in front of me.

Feb 21 – Jack McQuaide, Downey, CA
Lasted 3-4 seconds, I was traveling in a car heading west, and it appeared to travel from the north to the south. It seemd to be about 30 degress above the horizon. Very vivid bluish/green, with a golden colored trail. Brighter than fireworks. I have not seen anything like this before. I was in the mountains once before during a meteor shower, and didn’t see anything like this.

Feb 21 – Darrin Brenner, Burbank, CA
Lasted 5 seconds, green and white, very bright. Amazing! Looked like a firework at first. It was the biggest I have ever seen. I almost thought there would be an impact. Pretty amazing.

Feb 21 – Brittany H, Santa Barbara, Toro Canyon, CA
Lasted 2 seconds, Facing ocean, it was traveling east to west, bright blue/green with orange trail following. It appeared the orange trail may have been due to fragments. I was in the hot tub with my boyfriend, facing the ocean. He had his back to the ocean but the meteor was bright enough for my boyfriend to notice the color variations reflecting across my face on my face. Absolutely dazzling!

Feb 21 – Brian Merken, Culver City, CA
Lasted 3-5 seconds, light blue with no sound. Seemed like it was falling to the ground. I happen to be looking out the window when I saw it. We live in Culver City and can see all the planes heading to LAX. This was easily 5 times as bright as any plane. It looked as though it was falling straight to the ground as opposed to my past observations which seem to appear to fly across the sky.

Many are wondering if the meteorites are a sign of the end times. The Bible warns us in Luke 21:10-11 of six events that will come prior to the start of end-time, 7-year tribulation period. Each of these six events have been around throughout human history. What makes them a sign of the times is that they will begin to occur more frequently and with greater intensity as the end approaches. Jesus compared it to a woman’s birth pangs as her delivery approaches.

So perhaps the birth pangs are getting more frequent now and more intense. Regardless of how close we are to the end time events, there is enough trouble in the world today to make it a great day to draw close to God. He is the source of all good things, including the provision and protection that we all need. If you do not know the Lord and would like to find out what the Bible says about how you can have a personal relationship with Him, click here.

As always, before the fulfilment of prophecy, there are harbingers. These hargingers have been expressing themselves for several years now in many forms. fish dying, strange sounds, birds, dear, elk dying en masse. Look at what happened to the sun a few weeks ago, a third of it went dark. It begins. Don’t look at the calender, look at the clock.