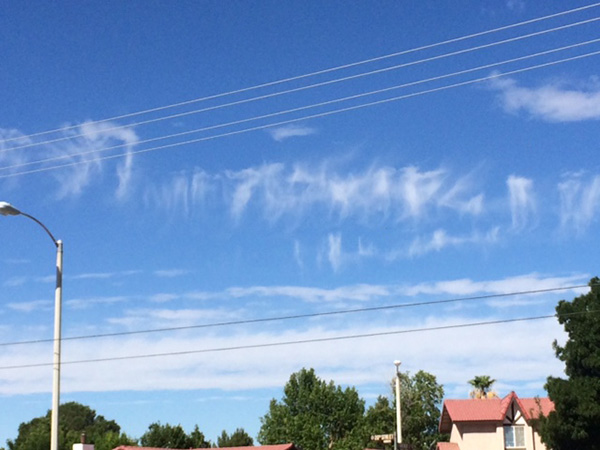 I have a very dear sister in the Lord who sent me a picture of some writing that appeared in the sky over her home some months ago. It looked like some type of Hebrew letters. When trying to match it up with Hebrew, all we could come up with was judgment and war, but we left it alone to wait upon the Lord for further instruction.

Recently, she sent the picture to me again and immediately I picked up on it in my spirit. Here is what the Lord transcribed as the meaning in the sky.

I went into a vision and as I did, I saw a hand appear and just as clearly write the words, which I am going to bring forth now. In part, it is a warning to a very influential world leader whose name I am not allowed to release yet. Here are the words interpreted into English:

This was written three times distinctively.

“Tell My people the wrath of the Lamb has come. Then I heard the voice of the Lord say, the nation of America, the church of America has polluted My name, My gospel, with debauchery, compromise, mammon, power, greed, and corruption. Have I not brought you where you are? I am the one and only true God. No one comes before Me nor after Me. My Father has given Me all power and authority over all people ,tribes, tongues, and nations.”

Immediately, I was taken in a vision to see the armies of both God and Satan preparing for battle. This was given to me briefly to see. Then I heard, “Bow Satan!”

Then I saw Satan bow down and that was the end of the vision.

I was reminded once again about our spiritual birthright, our inheritance. Do not throw it away. Do not carelessly hand it over to Satan. The Lord reminds us, we enter the kingdom as a little child, wearing garments without spots or wrinkles.

The hour is late and the time is now. Bible prophecy is rapidly moving forward.

God is warning like never before, loud and clear. The call is going forward, don’t be found wanting. Don’t be found without your garments. Don’t let loose of your inherited birthright or your crown.

Let this message sink deep inside and understand the seriousness, and the victory God has already won long before this battle takes place. Be encouraged saints. Be encouraged.

Take this to the Lord for confirmation and hear for yourself if this is true.

13 He performs great signs, so that he even makes fire come down out of heaven to the earth in the presence of men.
14 And he deceives those who dwell on the earth because of the signs which it was given him to perform in the presence of the beast, telling those who dwell on the earth to make an image to the beast who had the wound of the sword and has come to life.
15 And it was given to him to give breath to the image of the beast, so that the image of the beast would even speak and cause as many as do not worship the image of the beast to be killed.
16 And he causes all, the small and the great, and the rich and the poor, and the free men and the slaves, to be given a mark on their right hand or on their forehead,
17 and he provides that no one will be able to buy or to sell, except the one who has the mark, either the name of the beast or the number of his name.
18 Here is wisdom. Let him who has understanding calculate the number of the beast, for the number is that of a man; and his number is six hundred and sixty-six. (Revelation 13:13-18)

14 for they are spirits of demons, performing signs, which go out to the kings of the whole world, to gather them together for the war of the great day of God, the Almighty.
15 (“Behold, I am coming like a thief. Blessed is the one who stays awake and keeps his clothes, so that he will not walk about naked and men will not see his shame.”)
16 And they gathered them together to the place which in Hebrew is called Har-Magedon. (Revelation 16:14-16)

11 And I saw heaven opened, and behold, a white horse, and He who sat on it is called Faithful and True, and in righteousness He judges and wages war.
12 His eyes are a flame of fire, and on His head are many diadems; and He has a name written on Him which no one knows except Himself.
13 He is clothed with a robe dipped in blood, and His name is called The Word of God.
14 And the armies which are in heaven, clothed in fine linen, white and clean, were following Him on white horses.
15 From His mouth comes a sharp sword, so that with it He may strike down the nations, and He will rule them with a rod of iron; and He treads the wine press of the fierce wrath of God, the Almighty.
16 And on His robe and on His thigh He has a name written, “KING OF KINGS, AND LORD OF LORDS.”
17 Then I saw an angel standing in the sun, and he cried out with a loud voice, saying to all the birds which fly in midheaven, “Come, assemble for the great supper of God,
18 so that you may eat the flesh of kings and the flesh of commanders and the flesh of mighty men and the flesh of horses and of those who sit on them and the flesh of all men, both free men and slaves, and small and great.”
19 And I saw the beast and the kings of the earth and their armies assembled to make war against Him who sat on the horse and against His army.
20 And the beast was seized, and with him the false prophet who performed the signs in his presence, by which he deceived those who had received the mark of the beast and those who worshiped his image; these two were thrown alive into the lake of fire which burns with brimstone.
21 And the rest were killed with the sword which came from the mouth of Him who sat on the horse, and all the birds were filled with their flesh. (Revelation 19:11-21)

2 And He called a child to Himself and set him before them,
3 and said, “Truly I say to you, unless you are converted and become like children, you will not enter the kingdom of heaven. (Matthew 18:2-3)

On sept 18 I saw some letters in the sky but I could not make out what it was. Is there a way I can email you a copy and get. Your thoughts?

Thanks for sharing that. You can use our contact form to send the details of your vision.

Sister Bette, quit my job today as I’ve had an UNCTION OF THE HOLY SPIRIT to finish my duties as a soldier to bring a message of mercy, forgiveness, deliverance, repentance, and salvation to the gay pride communities on the east coast cities… Please note, that I will be traveling to the major east coast cities- Boston, Philadelphia, NYC, and possibly Wash DC; LORD willing of course thru July! Also, I’ve lined up other trucking jobs for after my evangelistic outreach (albeit, better paying since 1yr of experience is now under my belt in my trucking trade). Please keep me covered as I’m going into a “DARK ARENA” to snatch some out of the FIRE onto a ROCK… Much AGAPE LOVE in CHRIST JESUS, Brother Keith Saint James

where was this, what state?

geri this was taken in caligornia.

This gave me chills! This is yet another sign that we are quickly approaching the time! I wish more people would see what is happening!

The face on the extreme right is SATAN.
Horns and pointed beard clearly visible.
He appears to have wings.
Center are the 4 horsemen.
Their swords are drawn and the horses are in full march.
Following the horsemen is an army.
The entire army led by Satan appears to be coming from a doorway on the left.
To the extreme left, behind the doorway, we see the face of a spirit.
It is hooded as the Angel of Death.

In the distance directly underneath the army, I see a silhouette face of a modern man.
Also, there are things to the right of him.
This I do not understand.

How do you zoom in that much? I can’t get my computer to do it.

I took a picture similar last wednesday. Noticed it on our jobsite when looking at the picture. Want me to send it to you? Praise His Holy name

Sure, please send it.

the Gathering of the Nations in Jerusalem on Nov 7, 2016 with Major intercession for America starting at approx 3 hrs and 5 minutes into the video:
https://m.youtube.com/watch?v=cnU06-ncrMs

Some serious words through REVEREND MARY:

Speaking of “Hebrew,” here’s a great post titled “Why Did I Start Including the HEBREW Name of Jesus-Yahshua To My Posts?”

mem
Reply to  Peggy A.

I’ve listened to quite a few messianic jewish scholars talk about the name and they all seem to be in agreement. The formal long form of the hebew name is Yehoshua (Sam as Joshua of the old testament). It is shortened to the informal name Yeshua and the shortened form is exactly what Gabriel spoke to Mary at the annunciation.

This modern creation of of “yahshua” is not linguistically accurate and has no precedent in history. I understand why people like to make it so, basically a port-portmanteau of “Yah” and the suffix of Christ’s name “shua”, but as clever as that may seem, it is not actually accurate as well as jewish Christian scholars indicate. Yahshua is not even a real proper name as recognized by the language, it is at best, maybe a phrase People that use the hebrew name versus say the greek/english Jesus, generally do it because they want to be more accurate/precise.

This is a very good video explaining how Yahshua is not linguistically legal.

I’m not a “sacred name” person, it’s not a big deal to me if someone wants to say Jesus or not. Not looking for a debate at all. I tend to use Yeshua, just because I prefer to be as accurate/precise as possible, but I don’t disparage others for not.

Peggy A.
Reply to  mem

Linda explains in the article that she uses “Yahshua” to distinguish from the name “Jesus” being used in the end times from at least two DECEPTIVE camps that will be presenting a different “Jesus.”

AMEN sister! WE are getting closer to that final showdown between God and Satan but we know who won that war!! AMEN