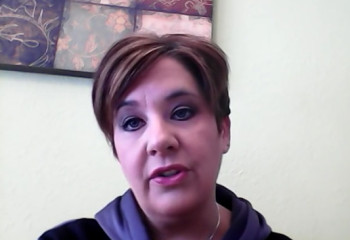 In 2008 Melisa Peggs received a dream in which she saw a tall slender man standing in the pulpit of a church. At first she was not able to see his face because he was standing with his back to her. She heard the Lord tell her, “The antichrist spirit has arrived.”

Then she saw the man in the pulpit turn around and it was Obama. She then heard a voice tell her, “That is the antichrist.” She shares more details about this dream in the video below.

In the years since she received that dream she heard people saying Obama is only a forerunner to the antichrist. She heard different reasons why he could not possibly be the antichrist. So about six months ago, she went to the Lord and asked, “Is this true? Is Obama the antichrist? I need you to confirm this to me.”

So she went to bed that night and had the following dream.

Obama was in this dark room. A light was behind him and shone down on his head and on the desk in front of him. He was holding a pen and there were papers, like a document, in front of him. I went over by him and looked over his shoulder at the document. It said, “Seven Year Peace Treaty,” and he was signing it.

The prophet Daniel revealed the antichrist would make a seven-year covenant with many people, which in modern language would be called a treaty between nations (Daniel 9:27). So Melisa understood the Lord was confirming to her that Obama is the antichrist.

I just want to let you all know the enemy did not want me making this video. I was trying to charge my iPad and my puppy chewed through the cord. I went to my bedroom to get my back up charger only to find the bedroom door shut and locked. After I made the video, my physical body was attacked and my back went out. I have been in pain since the making of the video.

She shares her dreams in the video below.

James, the way it is deteriorating in the middle east I doubt they will even make it another 3 years.
I just had a dream about an Israel war and I perceived the year was 2017.
Sadhu Sundar had a visitation from archangel Michael he had a scroll about Israel with three significant years in their history. The Years were 1948 (independence war) 1967 (six day war, Jerusalem restored), and 2017. He said he was told another major war is planned. He was told to prepare the land for 3 more good years in Israel. This was in 2014. ISIS (anti-Christ secret army) is already in GAZA and fired rockets into Israel.

I had another dream several weeks ago that the tribulation timeframe had shifted to an earlier time. The two timeframes in the dream where 2015-2022 and 2022-2029. However in the dream I kept stressing 2018 because Israel will be 70 years old. That’s interesting because Sadhu said Jeremiah the prophet visited him and talked about 70 years and a Palestinian state.

Hello Mr. James Bailey..
Could you tell me what you think about the “bible codes,” I kina found them interesting.. I was looking at it like this, just like God gives us signs and wonders, do you think codes are possible too? He does say “seek, and you will find.” Could you watch it too and tell us what you think?

I have been amazed by the findings in the Bible Code. I believe it is way beyond coincidence.

@phanuel.. I believe your right, your dates sounds about right, I believe it will be the second set of date time frame.. which seems to fit in the “bible codes” a Pastor posted on you tube. “Bible code predicts the end time” by Steve weyerts. Please please watch the video, it’s kina long, but as an end time follower it’ll be interesting.

There are no scriptures saying the antichrist will be handsome. That idea came from Hollywood movies.

Regarding your other points, Obama does have a huge following even outside of the United States, especially among Muslims. The elect have been totally fooled by him. Many Christian leaders still claim he was sent as a blessing from God.

Regarding whether or not he is the antichrist, it is not worth debating because I believe it only comes by revelation, which is why I encourage everyone to humbly ask God about it. That is what I did and I was amazed by what He showed me.

Only God knows when why and where his presence will show. Pray for forgiveness, and strength in faith as i surely need to, one love brothers and sisters.

In this post —Darin-July23-2015 —Darin , in the comments has Steve Quayle’s dream of a secret Peace
Treaty underway–Very interesting that today April 22 2016–sneaky deal –UN Draft Israeli Settlement Resolution
will only have to be VETOED by Obama. This is meat for Palestinians to come to table in France–for the
Summer Peace Conference–this will set up ” Peace” treaty, possibly Nov. 2016-Jan. 2017 in OB’s final
months of his being in office! This info was given by another Z3er in a link! OUR GOD WILL NOT BE MOCKED!

This may point us to the middle of the 70th – 7. With this deal struck in March, 2015, the middle or three and a half years will be January 2019. Daniel 9:27 is the real key now that we’re so close. They’re about to sign another peace deal in a few days – around Sept. 20th and if they cry, “peace and safety” that will be the last sign before the abomination – rapture and start of the 2300 eves – mornings if I have it down.

I don’t think the final seven year period could have started yet because the Bible reveals many major events must happen before the Lord returns. I documented ten of them in this post:

He, being Obama has all the ear-markings of a possible Anti-Christ. He turned America against Christianity, and moral values. “He will change the times” as it speaks in Daniel. Isn’t it strange that he did all this? He continues to spread his lies through smooth speech to the entire world, a world that seems him as a great leader, mostly in 3rd world countries, and to me, this means one thing. “All will eventually have to give him credit” In 2008 he was hailed a God of All things. Magazines and books spoke highly of him. He used the bible as a reference to speak of himself. “Be still and know that I am God” as if he was mocking the Lord by quoting scripture. I have never felt comfortable about him, if he isn’t the man, he is the one who will introduce him to the world stage.

Be advised and be aware.

“3 While people are saying, “Peace and safety,” destruction will come on them suddenly, as labor pains on a pregnant woman, and they will not escape.”-1 Thessalonians 5:3

WELL—News travels fast here on Z3news- BRAD and COLIN beat me to the latest–ALERT-Vote at UN
Postponed! You can read what they have to say! Darin’s Comments July 23-2015 has Steve Quayle’s
dream– interesting. Blessed Passover to All !

I am of the opinion that both Genesis 3:6 and Ezekiel 27:3 specify the Son of Perdition’s physical attractiveness.

Genesis 3:6 describes the fruit on the tree of the knowledge of good and evil, and says nothing about the appearance of any man, including the antichrist. Ezekiel 27:3 describes the city of Tyre, and the context of the whole passage provides many details to confirm it is referring to a city, not a man. If these scriptures are the basis for Hollywood’s version of the antichrist, then there is no basis. I believe his attraction will be in the spiritual realm, but not necessarily the physical realm since we have no scriptural support for that idea.