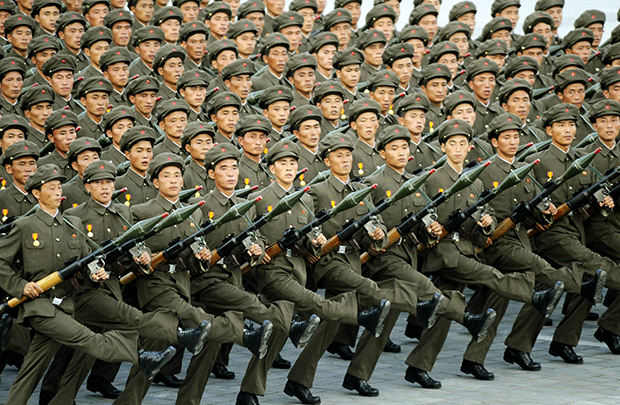 Economist Martin Armstrong studies historical patterns and uses them to predict future events with amazing accuracy. He posted a warning on his blog last week warning about two likely dates for military conflict, including August 12-13 and September 11-12.

I have warned in the Cycle of War reports that for whatever reason, August is always the number one period where war tends to begin. Indeed, the world is holding its breath as fears rise with the crisis over North Korea potentially escalating in to global war after Donald Trump and Kim Jong-un made threats to trade missile strikes. The two key dates on our war model with North Korea to watch are August 12/13, 2017 and September 11/12, 2017. We must be on guard for these are the prime periods where a confrontation could emerge. (see complete post)

We have already passed the first dates, so that leaves September 11-12 as the next dates to watch. We already know what happened on September 11, 2001, so that date is forever etched in our hearts and minds.

Martin Armstrong is not the only one seeing these events coming. The Bible recorded these things thousands of years ago. Revelation 9:11 warns of an evil spirit rising up from the pit of hell in the last days, whose name in Hebrew is Abaddon and in Greek is Apollyon, which means destroyer. No wonder we’re seeing destruction on 9/11. The destruction we’re seeing in the physical realm is caused by this spirit in the unseen realm.

Since none of us know when the Lord Jesus will come for us, but it we are in Christ, then no fear as right to invade our thoughts. Nevertheless encouragement will come from unknown sources ie: Those who are in Christ! I have included a message “Are You Prepared To Meet Your Maker”
https://app.box.com/shared/abd4hr1jde

The Lord is so faithful to his people, and to those who are not yet His people
In His Service,

I keep having Chicago come to my mind. I hope there has not been a false flag planned. There is a drill lined up for August 23 for electricity/emp preparedness. I also know my church has sent lots of stored food to Chicago recently. My church also knew to get missionaries out of Venezuela recently before the collapse. I know in 2014 I was praying to know when to be prepared to leave and God said, “after the summer”. Another time, I was playing with my daughter. The Holy Spirit said, “remember this, you will need it during the hard times ahead.” It made me cry.

https://m.youtube.com/watch?v=8pF2t5XZPOY
Pastor Paul Begley has an insider give him information that we should be aware of. Please listen and pass on.

Thanks Katie for posting the video!

In Brian Carn’s latest periscope, he reiterated that at the beginning of the year, he saw that America would send troops to war towards the end of the year around October or November and that we need to be praying for our troops especially around that time frame. So its looks like we are heading into serious times.

I’m also thinking of Pastor TD Hale’s recent dream of a pressure cooker landing on Israel and exploding. The dream was posted here in the last few weeks. Thank you James Bailey for all you do here at this site. But definitely sounds like something big is about to happen. I keep thinking also about how this eclipse on August 21st could precede the worst stock market crash in history!!! Wow!! God is desperately trying to get people’s attention. Blessings, Corrine

James Bailey: With Russia and China in negotiations with N Korea, they may be using Trump in good cop bad cop routine>

I think it’s safe to say China does not want nukes dropping anywhere near their nation, or millions of North Korean refugees fleeing across the border into China. So they’re probably glad to see Trump taking a strong stand against Kim Jong Un.

I just discovered in 1857 on the 23 September a great revival began in New York which brought to salvation about a million people and occurred at the same time as a great depression which led people to seek God instead of money.Is this a sign of things to come on 23 September this year?

When I read this article, the Lord said to me:
“Destruction is coming, even greater destruction than on 9/11”. I pray that we will be prepared for that day

My wife has had several dreams and visions lately that have a prophetic feel to them. She’s not a student of Bible prophecy but I believe God has been speaking about these things to her. She had a vision (or more like an image that came to her mind) last month that there was global chaos happening on September 8th. See didn’t a year but said she felt strongly impressed in her spirit that it would be this year.

Hope you can help me James as I do believe the day of the lord is when we get raptured and not a day beforehand. I am sad that many think we will be raptured soon. However they use Revelation 3:10 to prop up their belief and i wonder if you have an explanation about their belief of that passage. God bless.

Scriptures interpret scriptures, so all scriptures must be interpreted in the context of other scriptures. Revelation 3:10 is a promise to keep us from the hour of testing, but He did not specify when is the hour of testing or how will He keep us from it. Other scriptures tell us the righteous must be here during the 42-month tribulation because that is when the antichrist will make war with the saints and overcome them (Revelation 13:7), but he cannot do that if we’re not here. During that same time, he will shatter the power of the holy people (Daniel 12:7), but again, he cannot do that if we’re not here.

Because you have kept the word of My perseverance, I also will keep you from the hour of testing, that hour which is about to come upon the whole world, to test those who dwell on the earth. (Revelation 3:10)

I am in Toronto. Around Aug 5, the weather suddenly changed. It became quite unseasonably cold,for a day or two. I remember wondering if it was a ripple effect from the coming eclipse,washing backwards in time.What’s kind of interesting is that the “forward” edge of the same event ripple would manifest Aug 21 + 2 weeks + 2 days=Sept 6…Which is quite close to the Sept 8 date mentioned.
One other point of interest:Two days after the Aug 5 weather event ,the local birds -normally up and singing at 3:20 AM in the morning-stopped doing so.
They have remained silent since…

Steve, at first I thought your comment was a bit sci-fi, but I showed my wife (who is one of the most grounded and rational people I know) and she really thinks your experience is a confirmation of the September 8th date she saw (2017 being the year impressed upon her). She told me today that the visual mental image she received of that date was unlike any of dates she’s previously seen where exact events have come to pass on. It was an actual calendar she saw with that date on it. Based on other confirmations we have received, we both believe it will be a nuclear explosion in the heart of the US with fallout that will spread mainly to the Eastern side of the nation. The truth is truly stranger than fiction.

It looks like the forward crest of that “Ripple” (mentioned in the previous post) may have been pointing to Irma..

Watching live stream of Evangelist Anita Fuentes and her husband called “Black Sky Event”, where she just mentioned her 14-year old son had a dream the other night that Trump launched a pre-emptive strike against N. Korea. Her son receives dreams from the Lord. I hope and pray this will not happen.

China already announced they would back North Korea if we launch a pre-emptive strike, so that sounds like trouble.