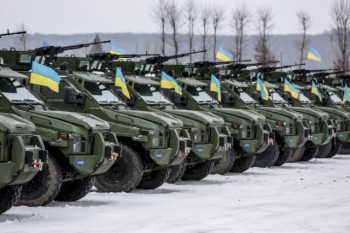 Yesterday we moved another step closer to seeing the fulfillment of what I have called “the event before the event” as the house voted to approve HR 1735, which is the 2016 U.S. Defense Budget.

The bill was approved by a vote of 269 to 151. Included in the 2016 budget is $200 million in lethal military aid for Ukraine. As I stated in my previous post, The Event Before the Event, the Lord showed me in a dream the sign that would precede the coming dramatic drop in the value of the dollar and the stock market would be a bill for $200 in military aid sent to Obama. He would then increase the total six times to $1.2 billion. That action would cause increased tensions throughout the world and the market crash would follow soon afterwards.

The United States has provided military aid to Ukraine in the past, but only non-lethal equipment. Obama’s approval of this bill would be the first authorization for lethal military aid for Ukraine. This would be a significant escalation in the Ukraine crisis and would cause increased tensions between the United States and Russia.

When I first received the dream I wondered how President Obama could increase aid for Ukraine from $200 million to $1.2 billion because the President only has authority to sign the bill or veto it. One possible explanation is the House bill includes $89.2 billion for an emergency war-fighting fund. Perhaps Obama would take funds from there, but I don’t know if he has the authority to do that either. Another possibility is he just does it anyway. His immigration reforms and other actions have shown he has no regard for the Constitutional limits of his authority.

The 2016 defense budget must next be approved by the Senate before being sent to Obama. The Senate Armed Services Committee voted 22-4 on Thursday to authorize their own version of the defense budget. In their version they increased the total spending for lethal aid to Ukraine to $300 million. The full Senate has not yet voted, but is expected to soon. The House and Senate must reconcile any differences before the bill can be sent to the President.

The timing of these events closely parallels another big event coming in June, the Supreme Court ruling on same sex marriages. I cannot help but wonder if that ruling might also be connected with the coming market crash. In my previous post, TD Hale’s 4th Prophetic Dream: Reign of Fire Coming to America, I shared the transcript of how TD Hale saw judgment falling on America after a gavel hit the desk of the President.

Now at this point he walked over to the desk and he picked up a gavel in his hand. The gavel was part wood and part stone. The handle was wood and the head of the gavel was stone. On the desk of the president of United States there is a document with these words written on it, “The final abomination.” He then hit the document on his desk with the gavel and when he hit this document on the desk then all of a sudden I felt a shaking. Honestly, I felt like my bed was shaking. Literally it was shaking and I could feel it. When he hit this document I shot up into the air and I was standing up above the White House.

So perhaps the upcoming Supreme Court decision is another clue regarding the timing of the crash. I was not shown the month when the crash occurs, but I was told it happens this year.

In my previous post The Rider on the Black Horse Coming in September 2015, I shared how the Lord showed Mena Lee Grebin the “death of finances” is coming in September through December 2015. She did not specifically say it would include the death of the dollar, but it sounds like that could be what she saw. If it is, then we are going to have two big crashes this year because I was shown this crash occurs prior to the death of the dollar. For more details, see my previous post: The Final Four Seasons of the U.S. Dollar.

The House approval of HR 1735 indicates this bill could be sent to the President within the next few weeks. The President’s approval could come months before September and would mark the beginning of the time of tensions that precedes the big event. The market crash could occur at any time after that. If the crash happens before September then we should expect to see two crashes this year.

Looks like they reconciled differences. Conference report could be out soon https://twitter.com/jus10j?ref_src=twsrc%5Etfw
If meeting between Putin and Obama doesn’t go well today, I expect some fireworks. Shalom

I believe if God’s people repent,seek God’s face and turn from their wicked ways; then God can avert judgement and bless them. Its upto the church in America to turn to God.

I would like to know what happens to our bank acct.’s when the dollar crashes and how can I prepare for this before it does occur? Any suggestions?

Found it! Looks like it is listed under “bills that may receive floor action this week” – S.1376
http://www.senate.gov/legislative/active_leg_page.htm

Thanks very much for the update. I am now adding that to a new post I just published.

James, do you know when the Senate will vote on this bill or if it’s on their calendar yet?

I have been searching for updates almost every day, but not finding much. Here is the latest status from congress.gov. “05/21/2015 Received in the Senate. Read twice. Placed on Senate Legislative Calendar under General Orders. Calendar No. 99.”

It seems like according to TD Hales dream true financial troubles will occur after June which is when the supreme court will announce its ruling on gay marriage. Originally I thought that this had already happened back in 2013 on the same month but now I believe that was a foreshadowing of things to come and a necessary prerequisite for their future final ruling.

James I’ve felt for a long time that China and Russia have the financial upper hand and would use that power to stop the US from starting WW3. I don’t believe they want war (at this time) especially knowing we will eventually implode on our own…… So when it seems inevitable (like HR 1735) that major confrontation with Russia is at our doorstep they will pull the plug. That could be in many forms such as starting a sell-off in the bond market or equity markets. Perhaps displaying their gold holdings to cause a precipitous fall in the dollar. In effect, weakening their adversary (US) in hopes of them backing down……. They know history and history shows all great empires loose power by loosing the value of their currency thru insurmountable debt.

That is a very interesting insight. Thanks for sharing that!

As bad as this all turns out for so many, it is still good to see true modern day prophecy being fulfilled as told by the prophet. It serves as morale boost, so to speak, when the Lord show us he is still here and in control. I have continued watching the dollar and it continues to drop for now. Thank you for being brave enough to share what has been shown to you.