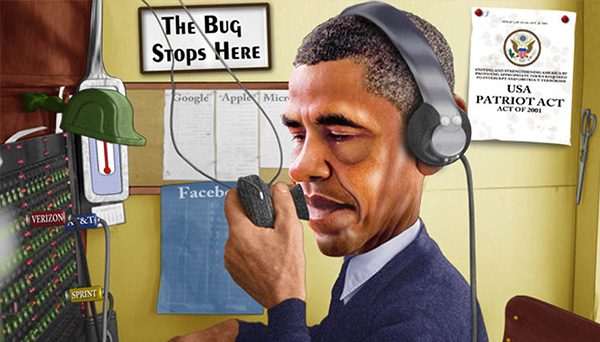 Just six weeks into President Trump’s term, the rift in our nation has intensified dramatically thanks to unprecedented yet concerted attacks against him led by Barack Obama.

President Trump is finally fighting back as the two presidents appear to be squaring off for a fight in the courtroom over allegations Obama wiretapped Trump Tower prior to the 2016 election.

In the 7:48-minute video below, radio talk show host Mark Levin lays out the evidence against Barack Obama. This clip comes from Mark Levin’s interview on Fox and Friends on March 5, 2017. The evidence shows participation from several agencies under Obama’s Administration, including the FBI, CIA, NSA, and three other agencies.

It appears we are moving closer to total chaos, just like Prophet Mena Lee Grebin saw coming within three to six months of Obama’s first press release through his new spokesman, Kevin Lewis, which occurred on January 30 2017.

© 2017 – 2021, Z3 News. The first 200 words of Z3 News articles may be shared online in exchange for a clickable link to our site. Please include the author name and do not make any changes to text or titles. No image files from our site may be shared because we don’t own them. For permission to use our content in other formats, please contact us.

James you and Linda Clay are the ones GOD used to show me who Obama the Evil is , the law means nothing to him since he seeks to destroy the law , so I never doubted Obama spied on Pres. Trump . As Pres. Trump has to defend himself , more truth of what Obama has done will come out , and push people into one camp or the other . The Battle lines begin to form .

WHAT A HEAVEN SENT BOMBSHELL!! All should listen to this Mark Levin interview on Fox!!!! Why wasn’t this mentioned today on all of the Fox News shows? THESE PEOPLE ARE the scum of the earth and God is starting the prosecution.

WAY TO GO JAMES!!!!! WHAT AN INDICTMENT OF OBAMA, THE FBI, THE NSA AND MAIN STREAM MEDIA!! GOD IS STILL WORKING WITH TRUMP! THANK YOU JESUS!!! Is gonna be great fun watching the news tomorrow. This will be impossible to un-spin or walk back. Many heads will role and maybe Trump will ask General Flynn back into his cabinet!

Bob I was just watching Fox & CNN , they are going to a lot of effort to say there is no evidence that there was any wire tapping and that Pres. Trump is the only one saying it . MSM is totally misrepresenting & twisting the info , interesting to watch propaganda in action .

John, bottom line: there is no evidence against Trump or Obama at this point in time and all written evidence is classified and can’t legally be made public but can only be legally shown to a legally constituted investigating committee. However, it certainly looks a lot better for Trump than the Obama/MSM elites. The Fox Mark Levin interview is very damning to the left but Fox has been deliberately not using it in the ongoing discussions about the “firestorm”. Looks like God is going to nail the MSM to the barn door and rightly so because if there is one snake in the woodpile of American politics over the past 70 years it is the communist news media.

Thanks for posting this James. Watched this, this morning before church.
My jaw dropped. Unbelievable. Getting crazy really fast.