You are here: Home » Church » Mighty Ones » Once again, the Lord is placing the sharpshooters on the front lines.
Share this post: 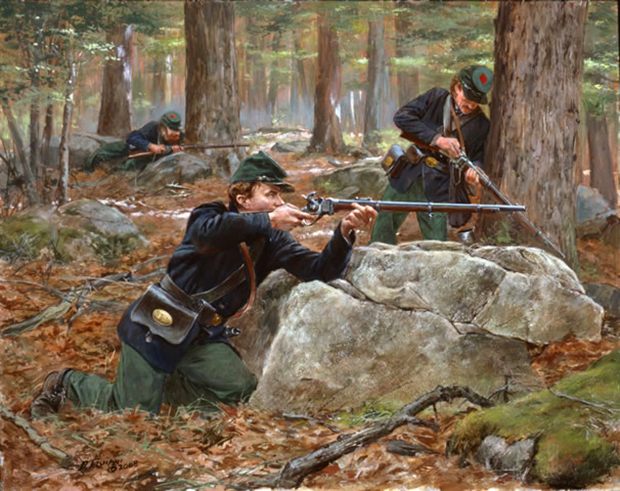 I often heard Christians say that God has called them to have a worldwide ministry, or they are called to be a prophet or prophetess to the nations but when faced with a trial they withdraw rather than pressing through. This is not a rebuke or criticism but a word of encouragement. Trying times will come, but we have to learn how to be overcomers in difficult times.

The Lord asked Jeremiah, “If you have become weary running with the footman, how will you be able to contend with horses? And if in the land of peace, In which you trusted, they wearied you, then how will you do in the floodplain of the Jordan?” (Jeremiah 12:5)

A couple of years ago the Holy Spirit showed me 1 Samuel chapter 23 as an analogy of His elite end time army. It speaks about the strong men in David’s army. One man killed eight hundred men with one spear. Eleazar stood his ground and struck down the Philistines till his hand grew tired and froze to the sword. Enaiah, who was a valiant fighter, struck down Moab’s two mightiest warriors and then went down into a pit on a snowy day and killed a lion.

Some of them were Gadites, whom the Bible describes as men of valor, men trained for battle, who could handle shield and spear, whose faces were like the faces of lions, and were as swift as gazelles on the mountains (1 Chronicles 12:8). They were strong and did great exploits. Once again, the Lord is placing the sharpshooters on the front lines. He is training our hands for war and our fingers for battle.

This end time army will understand they are not fighting against flesh and blood but against powers, principalities, rulers of darkness and wickedness in high places. Jesus is training His people to be proficient in their duties and know their mission. They are those who understand the significance of wearing the full armor of God. They know their rank and are submitted to their authority. Therefore, they stay in the position to which they were assigned.

The Lord is looking for those who are fearless and ready to face challenges, tenacious in spiritual warfare, alert and watchful of the enemy. They are those whose faces are as the faces of lions. They view obstacles through the eyes of the Spirit. They walk in strength and determination. Their enemies see the tenacity inside of them, therefore they cower back in fear. They are defiant in the face of adversity and will not become discouraged and will never compromise.

They are as swift as gazelles on the mountains, mobile, active men and women, ready to fight wherever and whenever they are needed. They will watch out for one another and be careful to avoid friendly fire. Those who enlist in the Lord’s end time army will never have to be concerned with the wiles of the evil one because they know that Jesus is standing with them at all times. As this end time army emerges, He will give them the wisdom, discernment and understanding as He reveals His strategies for the days ahead.

Some Gadites defected to David at his stronghold in the wilderness. They were brave warriors, ready for battle and able to handle the shield and spear. Their faces were the faces of lions, and they were as swift as gazelles in the mountains. (1 Chronicles 12:8)

No one engaged in warfare entangles himself with the affairs of this life, that he may please him who enlisted him as a soldier. (2 Timothy 2:4)

If any of you read this could you please pray for me. I went to the doctor and they took my blood and everything was fine. Physically i feel fine , it’s just for the last week my head feels dizzy and fuzzy. something doesn’t feel right. if you could pray for my healing i appreciate it. i don’t really have a church i go to so this is one of my only really christian outlets. thank you. i appreciate it.

Father, in the name of Jesus, we pray for our brother Antonio. You say in your Word, LORD, that Your strength is made perfect in his weakness. We pray that Antonio would not only feel Your strength in his time of need, but that You, LORD would restore Antonio’s strength to him. We come against these spirits of dizziness, may they be bound and cast out in Jesus’ name. May his vigor and health be restored in Jesus’ name. We praise and thank you LORD, for this healing. Have mercy, Oh LORD. Deliver us all from evil. For thine is the Kingdom. Now and forever. Amen

And Amen again!
No weapon formed against you, Antonio, shall prosper. Any tongue risen against you we condemn it in Jesus’ Name. You were bought and paid for with the price of the blood of Jesus which is living and active in your being, spirit, soul and body.
Cover yourself with Psalm 91 and taste and see that the Lord is good. And we all reading these words, we hide ourselves in Him under the mighty outstretched hand of the King of kings. Yea, we are sheltered from the enemy.

Let this be an encouragement in the days ahead.
Isaiah 59:19
When the enemy comes in like a flood, the spirit of the Lord will lift up a standard against him.

1 Corinthians 10:12
Wherefore let him that thinketh he standeth take heed lest he fall.

Psalms 37:23-24
The steps of a good man are ordered by the Lord: and he delighteth in his way.
Though he fall, he shall not be utterly cast down: for the Lord upholdeth him in his hand.

Thank you for this timely word. I am one who needs to let go of the affairs of this world. Thank You, Lord.

Powerful word!!! Send me Lord! The spiritual battle has been FIERCE in the last few months. I honestly didn’t think I would live through it. Not by strength, power or might, but by HIS SPIRIT. Blessings, Saints and Warriors of The Most High! ✝️??