You are here: Home » Babylon » 1st Beast is Obama » The Leader of Your Nation Has Done His Job Well
Share this post: 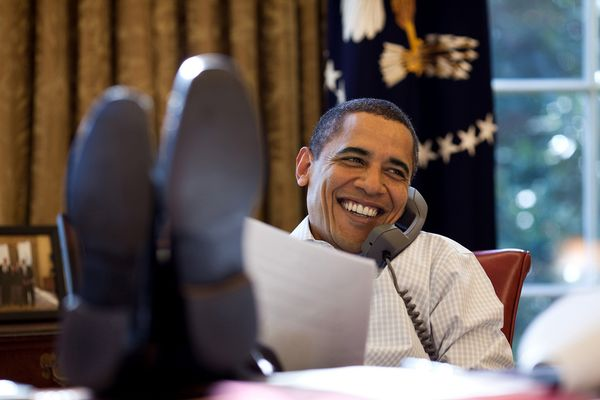 The clanking of the chains as they drag on the ground can be heard.  The “monster” from the depths has been released from the bowels of hell.  Know that it is all connected.  The forces of evil move upon this earth carrying out great and horrible schemes.  One leads to another and to another as the cacophony of chaos grows:

The eruption of fire from the depths will come not in just one place but many.

The militia ordered to the streets.

The attack on sovereignty.

Like a house of cards the U.S. will fall.  All the while, laughter sounds from the White House.  The leader of your nation has done his job well.  He has carried out the orders of the Evil One most perfectly.

Your borders are open.  The enemies of my people now surround them from all sides, yet I say to my children, fear not for you will be mine in that dreadful hour.

I desire that my children would make the connections.  Satan has one plan and is prepared to battle on every front.  His hoards move about the earth from one attack to another.  Man are but puppets in His hands.  Timing, timing, timing.  One event after another as the beat of the drum gets louder and faster.

Draw close to me day by day.  Every day I have instructions for you.  You must learn to tune out the world and tune to me.  An explosion here.  A shooting there.  A flood here.  A famine there.  You must learn to feel my breath, the breath of life.  You cannot protect yourself or your family in this hour.  I am your only covering.  You are being hunted by the lion who seeks someone to devour.  He and his “pride” are hunting my children one by one, but it is I who stand in the way and thwart every plan of the enemy as my children hear my voice and come to me.

Rachel Baxter is a wife and mother of four children. She earned a Bachelor of Science degree in Industrial Engineering and an MBA. Rachel was baptized, confirmed, and married in the Lutheran Church Missouri Synod. She was never taught about the power of the Holy Spirit. In 2013, she was baptized into the Holy Spirit while in her bedroom crying out from her floor. Since that time, the Lord has changed her life in every way. She felt called by God to help establish the Lord’s Mountain of Education and has a heart to see children and adults alike set into the destiny God has for them. In 2014 she founded Valor Christian Academy Omaha, a Spirit-Led Missional school in Omaha, Nebraska. The focus of the school is equipping children to walk in their God-given destiny according to Ephesians 4.

That same year the Lord began to speak to her about the things that are coming upon the earth from His redemptive judgments and from the plans of the enemy.

Rachel is also a part of One Whole Heart Ministry, an inner healing ministry, that seeks to set people free from hurt through forgiveness and repentance, and to help them hear the Lord’s voice and follow Him. She shares her insights on her blog site, called Scroll and Fig Leaf.

For some reason, The Holy spirit keeps echoing Rachel’s post to me… Particularly:
“The clock strikes 3. Three bells chime.” and “Timing, timing, timing”.

This time… the three’s led me to Terry Bennett’s 2001 visitations from the angel Gabriel revealing to him a 21-year period marking the rise of the antichrist. The 21-year period was made up of “three” sabbatical cycles of 7 years each: primarily 7 for the economic collapse, 7 for the government chaos, and 7 for the NWO religion. I am sure that most of you are familiar with the details because James has written about it several times.

For me, Rachel’s post serves as a timely warning that the antichrist has just completed his first 7-year cycle and we are in transition for the next 7 years to begin. The dramatic changes for the 2nd period shown to Terry Bennett included the coming chaos and civil war shown to Rachael. The phrase… Timing, timing, timing… is to remind us of the coming and shortening birth pains as we transition the three 7-year cycles. The beat of the drum gets louder and faster… can be another reference to the birth pains. Rachel also is told… “Draw close to me day by day. Every day I have instructions for you.”. Notice that we have a another three-word repetition of the word day… which is another reminder related to time. Our time is getting short.

David WIlkerson prophecy about economic collapse is drawing near.www.stevequayle.com is warning about a Mexican default.

Melisa, Terry Bennett may turn out to be the best. Have you read his words from Gabriel here at z3?

Rachel, thank you so much for sharing this!!! It’s just continued confirmation of what the Lord is speaking to us.
Beverly

Wow. Rachel. I loved reading that you refered to that snake as he and his “pride” it fits not only because he is a roaring lion but because it is the very reason he was cast down! Again it reminds us that We cannot grow weary in doing what is right! We will All be tested in a Peter fashion soon as we individually must all either deny or proclaim HIM! This is nothing you guys! Compared to Eternity! We can do this! Just hold on just a little while longer! Encourage one another! And be bold to expose Satan’s lies in this life while there is still time! Because Rachel’s right the souls of OUR children are What this war is for! Thank you Rachel. Thank you LORD!

John, I like what you said, We can do this! Terry Bennett put it into perspective when he said, God has a beautiful plan. Keep in mind America will rise again after it hits bottom.

Again, it’s the Islamic invasion. This world war 3 is strictly going to be a religious war.

The Islamic fundamentalists are making the first strikes. I don’t think it’s terrorist attacks, it’s more like terrorist invasion and conquest. That’s their aim. Erdogan will be their leader.

In Revelation when it says the second beast will get the 10 horns to make obeisance to the second beast, it’s a very clear clue. And I finally unraveled it tonight. The first beast came before the second one and it was the Sulten leading the islamic caliphate. It was wounded when the Turks were defeated. Now Erdogan will ask 10 Islamic countries to help him resurrect the image of the first beast. The image is just the image of the last caliphate. They want to bring that image back. The law will be by Erdogan and that will give the life to the beast to condemn those who don’t worship the beast.

Our president made this so much easier for them by opening our borders the last few years, to the dismay of the people he swore an oath to serve.

I had to look up cacophony and it helped me to hear the Chaos.
cacophony: harsh discordance of sound; dissonance: a cacophony of hoots, cackles, and wails. from Greek kakophonia, from kakophonos “harsh sounding,” from kakos “bad, evil”

“The clock strikes 3. Three bells chime.” and “Timing, timing, timing”.
That led me to the number 333 which led me to:
Isaiah 33:3 KJV At the noise of the tumult the people fled ; at the lifting up of thyself the nations were scattered.
That verse really gets interesting when you look up the meaning of tumult.
tumult: violent and noisy commotion or disturbance of a crowd or mob; uproar

Then I read all of Isaiah 33 and wow… It gives Woe to the Spoiler of Jerusalem (Assyria). The chapter really mirrors the tone of Rachel’s post and the current status of the world we now live in.

You might also want to check out these other 333 verses.
Ezekiel 33:3 If when he seeth the sword come upon the land, he blow the trumpet, and warn the people;
Psalms 33:3 Sing unto him a new song; play skilfully with a loud noise.
Jeremiah 33:3 Call unto me, and I will answer thee, and show thee great and mighty things, which thou knowest not.

Wow! That is really helpful Wiley. Thank you for your prayerful consideration of the message of this word. The Lord has used the word tumult with me before and it gave me a sense of urgency and severity.