You are here: Home » Church » Persecution » Lawlessness Abounds, Soon The Beast Will Wage War Against The Saints (Godshealer 7) 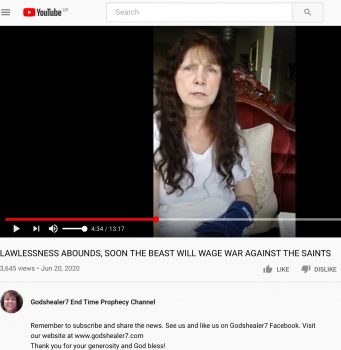 “Lawlessness abounds. Soon many will cry Abba Father, many who have refused me in the past will turn to me in the future. As the BEAST and his army wage war against the Saints.

Death, famine and pestilence will continue.

You will see family members turning against each other. Brother will betray brother. Husband will betray wife. In an effort to control the people, the authorities will offer monetary rewards to anyone who reports someone breaking the newly imposed laws. They will be removed from their homes and will be placed in concentration camps. You will see public executions. They will be shown live on your news stations. Anyone trying to flee punishment or re-education will be shot on site.

Every citizen will be required to wear a tracking device. Any attempt to form groups of resistance will be considered an act of terrorism punishable by DEATH.

As the multitudes sleep the authorities work overtime trying to remove all laws and rights handed down by your forefathers.

DO NOT BE DECEIVED.

I have sent you messengers and prophets to warn you. Have you listened? Soon they will be SILENCED.

Repent the Day of the Lord is at hand!”

She shares that the quarantine required people to stay in their homes, that there were only certain days allowed for shopping, and things were stricter overall.

She wrote about the road seeming to be a lie, whereas the river next to the road was the truth. She added this comment underneath her video, “The world is going to follow what looks like the right path, but it’s a lie.”

An army, that was not nice to the people and disrespectful of the people’s personal items, were rounding up people by a geographical section to take them somewhere, telling them that they could only take one bag. She had been trying to check on someone whose home looked as if there had just been someone there, but because she and her husband were in that area when the round-ups were taking place, the army soldier insisted they had to go with the rest of the people in the area.

She felt scared and was trying to convince herself that the government was doing what was best for the people but she knew this was untrue.

Thanks Again, Expat Girl,
Terrible times ahead. I expect this persecution won’t remain in USA. While we have a Christian Prime minister in Australia we cannot relax and think we are safe.
Great effort as usual
Philip

You are welcome Philip. I added a second dream that seems to confirm the Godshealer7 Word so please check that out as I added it after your comment. Yes, it is not just the impending eclipse but the feeling that evil has been rising in the world. You, like me, are headed into winter, so we would naturally be expecting darker days, I.e. days with less sunlight, but this is definitely a spiritual darkness. Sadly, I do not believe any leaders are “Christians” due to the control the Jesuits & Freemasons have on positions of power. I do not believe they would allow a Christian to ever hold a position of power & to possibly block their goals. 😢

Funny you should say that Expat Gal from the beginning there was a check in my spirit about Pence that he is not what he seems to be. He seems to be the perfect christian, but my spirit tells me to not trust what I see. I keep asking the Lord to show me why I feel this way. But I still do not know. I pray I am wrong

Hi Michelle – Pence is a 33rd degree Freemason. He can be seen in different photos showing the Illuminati hand signs. 😔. True Christians rarely make it into positions of significant power in those industries controlled by the “Prince of the Air” (music, movies & Government).

I believe you are right Expat Gal! I believe that Pence was insurance if Trump did not follow along with the “plan”. Just like Bush Sr. was insurance with Ronald Reagan. But we know that Reagan got compromised. Sigh…. but all these things must come to pass, I just pray that we all endure to the end. Let us not fear.

Expat Gal — I haven’t found concrete evidence that VP Pence is a Freemason but that doesn’t mean he is not. VP Pence is an enigma and has a mysterious aura about him. He seems to have a dark, serious personality. Will have to do some research on his family’s ties to Freemasonry.

Philip – Sydney .Anne here… have been pondering & praying re situation ..what you mention in your reply and Expat Gals reply also.. especially noting re what Expat gal mentions re the control of the powers that be.

In our news tonight @ 9.30 pm it was news alert for Sunday evening.. Victorian premier Daniel Andrews is toughening up again saying there are supposedly 19 new cases in Vic. .maybe 25 Aust. wide… as of June 21st. he says Covid hot spots may be targeted with police checks on any families who disobey rules & have large family gatherings in their homes etc.. neighbours can report them also..so things may change in the course of this week until July 12th.. ? travel outside of certain hot spot areas would disrupt many things even further.

His last statement tonight was things will not change until we have a vaccine… so that is really reinforcing the dire situation we now find ourselves in due to the nature of this rotten virus.. so gut wrenching…the effect has been horrendous in many cases.. work, careers , employment schooling, churches etc.

Posting this video as it contains key issues we have been seeing, experiencing in 2020: 11 mins or so… also problem,reaction,solution)

this is what is coming =prepare for the worst.! …considering the word famine… food shortages etc.

Sure sounds like it parallels the vision of Bother Bob, sorry i don’t know what else to call it, from years ago. It is a most horrible prophecy of the tribulation, the foreign troops on our soil enforcing UN agendas, I have to wonder really, because of the current events, there is no leaders calling for the squashing of this rebellion except Rand Paul, and tom Cotton, even POTUS seems to be idled by it, but in his case I think he is forcing people to see the evil in our land.
Anyway thank you for sharing, as scripture says let in the mouth of two or three witnesses let a thing be established.

It was always going to be like this. The Bible spoke of it. Humanity could never avoid this. This is what makes me sad. Hopefully we will have time to build safe havens