You are here: Home » Church » Persecution » Large Danish ministry forced to shut down after slanderous attacks from Danish government and news media.
Share this post: 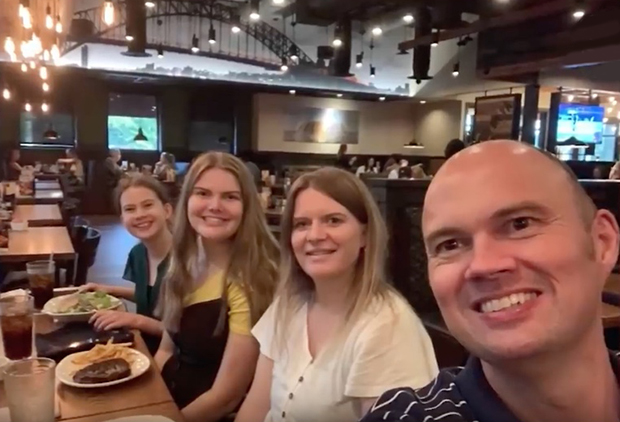 Danish Evangelist Torben Sondergaard, shown above with his family, founded and headed a ministry in Denmark called The Jesus Center, which trained disciples from thirty nations. His ministry recently came under attack by the Danish government, which launched investigations by six different government agencies. After the investigations found no evidence of wrongdoing, Torben was approached by Danish reporters claiming they wanted to do a profile of his ministry, leading him to believe it would be a positive story, so he agreed to allow them to come and interview him.

In addition to a film crew, the reporters secretly sent two undercover reporters to infiltrate the ministry, claiming they wanted to become Christians. One of them was even baptized at the Jesus Center as part of the ploy while the other pretended to be mentally ill.

When their report was aired on national television in Denmark, Torben watched in horror as they portrayed him as a liar and associated him with other Christian ministries who had been guilty of crimes. As a result, he became a punching bag on Danish TV as guests on news programs pushed for a new law against Christians who allegedly inflicted mental violence against children through healings and deliverance. Then demands were made for him to be investigated for the crime of quackery.

Torben shared what happened next,

“Then they interviewed a state church priest talking about how we were the evil people coming as a predator to the weak animals who were sick and eat them, and how we wanted to take people into the cult. And I just saw that I was already guilty in the minds of the politicians. I was already guilty in the minds of the people for something I had nothing to do with. And we had people starting to call us saying that you have to leave Denmark now because they are not going to stop. They want to continue getting you down. So, we bought a ticket to America and two days later we packed our suitcases and we left with our kids to America. And it was very stressful. And now our center is closed, our 80,000 square feet center in Denmark is closed. Everything is closed down.”

Torben and his family have appealed to the U.S. government for political asylum, testifying in a sworn affidavit that if he is returned to Denmark, he risks being imprisoned and having his daughter removed from his family.

The coordinated attack on his ministry from both government agencies and news media organizations shows both are controlled by the same spirit of antichrist, confirming what has been revealed to me in dreams. Multitudes of unsuspecting Danish citizens were intentionally misled, but the same thing is happening with mainstream news media coverage in the United States, which is why it’s a big mistake to submit ourselves to their indoctrination, which often uses testimonies of so-called experts to craftily manipulate our opinions and undermine our faith in God.

The spirit of antichrist controlling our mainstream news media is not limited to those aligned with the far left either, as some have mistakenly assumed. The whole left-right paradigm is just part of the deception to convince us to let our guards down by assuming we can trust news reports coming from the right, but it’s just another flavor of the same poison. Satan even disguises himself as an angel of light to deceive us. (2 Corinthians 11:14)

The evil tactics employed by the unrighteous are foreign to the righteous, making us vulnerable to believing their intentions are pure when they are seeking our destruction. Wolves have been using our vulnerability to take advantage of us for centuries, infiltrating Christian organizations the same way they infiltrated Torben’s ministry. For example, in his book, The History of Protestantism, published in 1878, author James Wylie summarized the infiltration tactics used by Jesuits as follows:

“There was no disguise they (the Jesuits) could not assume, and therefore, there was no place into which they could not penetrate. They could enter unheard the closet of the Monarch, or the Cabinet of the Statesman. They could sit unseen in convocation or General Assembly, and mingle unsuspected in the deliberations and debates.

In the United States, the federal government has even used this same infiltration tactic to control our news media. For example, the CIA has trained hundreds of agents to work under cover within news organizations and even has an internal department for training their phony reporters before placing them in their assignments. I documented these facts in Part 2 of my book, Remnant.

We can learn from Torben’s mistake by keeping our guards up at all times. By recognizing the spirit operating over our news media, we can avoid speaking to them altogether, giving them no opportunity to twist our words for their evil purposes.

The 5-minute video below shares more details about the infiltration and persecution of Torben Sondergaard’s ministry.

I don’t know if anyone has given this update or not but Torben was arrested here in the U.S. the beginning of July on “suspicion of smuggling weapons into America”. They even denied him bond. He truly is being persecuted. Please pray for him. He is not letting this stop him from sharing the gospel to his fellow prisoners. The full story is on his website: thelastreformation.com

You forgot to mention that one of the undercover reporters, mentally ill one when he asked Tørben if he should continue with hes medication, Tørben said NO.

And was that not also SLANDER? Pastor Tørben maintains he gave the answer (same one that all healing evangelists give): don’t stop your medication (until your doctor has verified your healing).

Check out this incredible testimony update on what God is doing in the life of brother Torben and his family.
Hallelujah, thank you Lord, you are so faithful. Glory to your Holy name.

Waoh! Look at God, He has just gone and done it again. God is awesome.

This is beyond sad. I’m speechless.

Be prepared for house churches as in China.

This really broke my heart! I have watched many of Last Reformation videos on YouTube and listened to his teachings. I will be praying for Torben. I last saw that he was doing a meeting in NJ and hope to attend one of his meetings some time.

Torben has a deep and open heart and very anointed ministry, he is really amazing, check him out on YouTube, “The Last Reformation”. We might want to consider the other side, that the Holy Spirit allowed this to get Torben out of tiny, insignificant Denmark and into a much wider global ministry, for which he is more than qualified. Denmark’s loss is America’s gain, and maybe only a first step in the future road for Torben.

Hopefully he will be allowed to stay. Our government allows tens of millions to enter illegally while rejecting many Christians who have had legitimate legal requests for asylum.

I had the same thought, Kevin. This despicable scheme happened to take the Torben Family out of harm’s way…

He’s welcome to come to Australia if he can jump through all the hoops,
Regards Philip

Hi Phil,
Do you have any update on RDD recovery timing for Cryptopia?

Hi Michael
I am relying on the tweets from the liquidator . Just a guess but I expect we will have to wait for another 2 months before we see signs of a return to clients,
God bless
Phil—
Note cobinhood.com is now down. I hope this is not the end of cobin hood. A loss for many if so.