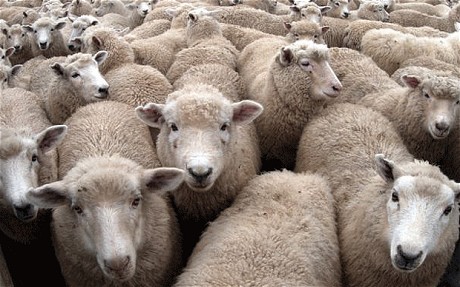 Following are words received on 23 November, 2015:

“There is coming a great day of destruction for the nations of the world. Germany has opened the gates of hell to her people. Finland too seeks to appease evil. Of those who have openly embraced wickedness, no nation will be spared, including America.

Like lambs led to slaughter, millions embrace all they are told. My children have been duped by false pastors and false teachers, by those claiming to speak for Me, by those who have a form of godliness, but deny The Power. My people wallow in the mud of lies and disinformation, thinking all is well.

The distractions of the world have crowded out the wonder of the cross, the glory of the gospel, and the miracles of the Master. Shepherds have remained silent while the sheep scattered. Now storm clouds gather and My flock will be tossed to and fro. Evil winds will soon blow across the nations, gathering strength as they move.

Many will look deep inside themselves, repent, return, and commit to Me; returning to their Abba Father. For others, their anger will be aroused and their hearts will become harder, causing the chasm between them and their God to grow even wider.

Do not be amazed, be prepared. The bell tolls midnight quickly. Time will end for business as usual.”

“Hear and pay attention do not be arrogant, for the LORD has spoken. Give glory to the LORD your God before He brings the darkness, before your feet stumble on the darkening hills. You hope for light, but He will turn it to utter darkness and change it to deep gloom. If you do not listen, I will weep in secret because of your pride; my eyes will weep bitterly, overflowing with tears, because the LORD’ flock will be taken captive.” (Jeremiah 13:15-17)

To Michael Perritte I don’t personally need an apology ,Because as a born again Christian I should’nt let anything drive me to hate others.But there are a lot of my people who don’t feel like I do, they sit in churches who preach hate of the white race in a back door way. How else could they vote in a president because he is BLACK, And they all saw the church our president went to ,Rev Wright (Rev Wrong ) LOL was one of the most racist people I have ever seen in my life, We all knew the hatred Obama had for Whites AND Evangelicals Christians before they ever pulled that lever to vote him in TWICE, YES I would say my people are very angry. But did you know this that when he opened the gate to all the hispanics He gave all the low paying jobs away that a lot of my people could get there are so many unemployed blacks now, this man does not care about anyone, And my people still praise this man as though he was GOD. When he was elected our BLACK radio station called him Christ who had come to save us.Please Pray only Prayer could change this kind of mindset, If an apology could be the answer Churches Pray Please do it quickly, I believe The LORD wants to CHANGE every mind from HATE to LOVE.

Ali mentioned Germany and it’s demise in the dream she was given. I posted a dream I was given last year about the collapse of the oilfield and the collapse of Germany where I was born. It seem both are happening right before our eyes and are escalating rapidly. I believe both are major markers of intensifying shaking.
Also in response to EMG I was given a vision 2 years ago of a remnant awakening within the church and a vital aspect of that awakening was the healing of the wounds upon the soul of this nation in regard to the treatment of the Native Americans and slavery. These wounds have never been healed and have been tolerated by the church to this very day. It is our responsibility as the church to bring such a healing and the raising up of a last days remnant ready for a last days harvest.

Totally Agree ! The Church is called to heal the wounds and the healing of the Native Americans is overdue ! It takes humility to go deep into a root cause and amend by reciprocal forgiveness. There is a lot of pride in the American Church…but the day is coming when the Lord will address this pride and the Church (or the remnant church..) with a tender heart will seek reconciliation with a repentant and forgiving spirit.

You can rest assured your medical implant was not the mark of the beast. I am hearing insider warnings of a July 2021 target date for mandatory implants for United States residents and later for other countries. So we still have a few more years to go.

“My children have been duped by false pastors and false teachers…” this is enlightening Ali, because back on 13 Oct I received “Duped … Christians are being duped”. Thanks for your obedience in posting because it helps me realise that I am not going nuts, maybe the same Holy Spirit is in Australia that is in your part of the globe !
Anyway at the time I didnt really know what duped meant so I looked it up on http://www.thefreedictionary.com/duped and found a lot. Here is some definitions of dupe (noun) and duped (verb) : A person who is easily deceived or is used to carry out the designs of another, a person who unwittingly serves as the tool of another person or power. To deceive, trick, cheat. etc etc
I assumed that it was Satan who was doing the duping of Christians. This post adds clarification in that they are “christian” leaders/ministers. This is scary because some of the trusted leadership is doing the work of the devil. I think this calls for a time of great discernment. In reverential fear before our God. Inquiring of the Lord. Asking him the right questions. Having an open ear and a humble spirit. May we continue to pray for our pastors and teachers.

Amen and AMEN. Thank you Bryan. I too thought ‘duped’ a strange word and looked it up as well.

22 The steadfast love of the Lord never ceases; his mercies never come to an end;
23 they are new every morning; great is your faithfulness. Lamentation 3:22-23

Praise the lord people, he is coming back!!!

“You must realize when all hope is lost, it is then we shuold be the most hopeful. B/c we are putting our trust in God alone. Fr. Jean-Pierre De Caussade

Just noticed the posting time 3:22. Very fitting for the skull and bones organization at Yale is a training ground for young elite (Kerry, Bush senior, Bush junior were all “bonesmen”). They have sold America down the river and the sheep for slaughter. Do a search for their symbol.

skull and cross bones with the number 322 is its symbol

3:22. Did not notice. If you haven’t checked it out, you might find Daily Crow of interest. LORD bless.