You are here: Home » News » Jesuit Agendas » Genetic Engineering » New Do It Yourself Kit Allows DNA Modification At Home
Share this post: 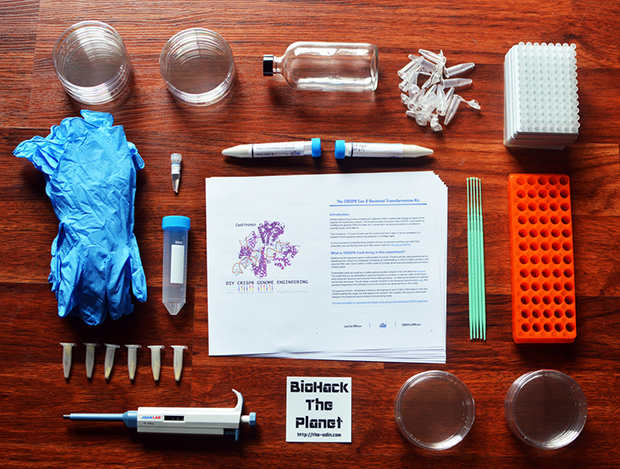 A new industry has emerged for people who want to modify their bodies in hopes of improving their life, such as weight loss or enhancing brain functions or other changes. I am not recommending this, just sharing because I was amazed to find we can now modify our own DNA through a process called CRISPR, which is being marketed as do it yourself kits to modify your DNA at home, like the one shown in the photo above, which is explained in more detail below.

Our DNA is the biological code that defines our physical bodies and all the systems operating in us. Each of us received this code from our parents. CRISPR modifies the code in a small strand of cells, which initiates a process by which it is then replicated as the changes are applied to the rest of our body. It sounds like uploading a new app to our mobile device, but much freakier.

The whole process sounds dangerous to me, like playing God without being able to see the full extent of the consequences. It raises the question, how much can we modify our own code before we are no longer the person God created us to be? Is it possible to cross a line, going beyond the point of no return, in which we become something other than human, something that no longer qualifies for God’s plan of redemption? Those are questions I would want answered before even thinking about making any changes to my DNA. Even then, I’ll pass on this one.

The kit shown above is called the DIY Bacterial Gene Engineering CRISPR Kit and sells for $169, as explained by the following description.

Comes with an example experiment that teaches you many molecular biology and gene engineering techniques.

Want to really know what this whole CRISPR thing is about? Why it could revolutionize genetic engineering? This kit includes everything you need to make precision genome edits in bacteria at home including Cas9, gRNA and Template DNA template for an example experiment.

Includes example experiment to make a genome mutation(K43T) to the rpsL gene changing the 43rd amino acid, a Lysine(K) to a Threonine(T) thereby allowing the bacteria to survive on Strep media which would normal prevent its growth.

Kit contains enough materials for around 5 experiments or more

Tom Horn of Sky Watch TV made a statement one day, that the mark of the beast could change our DNA, and make us not authentically human, to the point where we couldn’t be redeemed. This is scary and dangerous!

This is crazy stuff modifying your DNA. I enjoy your site james and your doing great things for lord teaching and giving knowledge to your platform. Which is so important in the days we live in. Stay strong brother il keep you in my prayers

https://whistleblowerjeff.holyspiritwind.net/2018/10/the-illusion-of-trump-pence-with-warning-to-the-false-prophets-linda-hasche-believeacts2/
From Jeff Byerly site. James, this is very serious! Mark of the Beast through the Pride of people!
DO NOT USE DNA GENE ENHANCEMENT!

They are playing with things with no idea of how it will end. It is like a group of monkeys playing with explosives. The damage could be profound.

Wow, that is some scary stuff! If you don’t enlighten the people, who will? I am so thankful you are posting articles again. I have learned so much from you-Biblically, spiritually, prophetically, practically, financially, even socially. As it states in the Book of Daniel, knowledge will be increased. I think it’s the time and season for gathering knowledge. I felt led to pray for you yesterday, I looked up out my window and saw an eagle soaring. I think your apostleship is upon you. The Enemy hates eagles. You are his worst nightmare. So I will continue to cover you in prayer so you can continue this battle fearlessly, and pray that everyone do the same.. Thank you for being courageous. Endure to the end., James. Great will be your reward.

Thanks for the encouragement and prayers Carolanne. The past couple of weeks have been a process of stepping into a new direction which was not at all clear to me at first. Even last night I realized I was veering off course by trying to post too many articles, which was keeping me away from posting far better stuff that I’ve been working on for a long time. Realistically, I won’t be able to post new articles every single day because of the time it takes to write them, but hopefully they’ll be worth the wait.