You are here: Home » News » Financial News » John Williams: Expect a Panic Decline in the Dollar 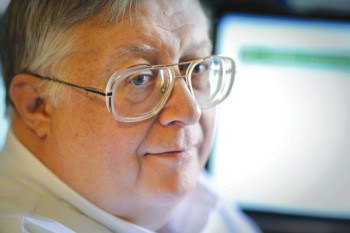 I could hardly believe what I was reading when I saw what economist John Williams said in an interview with Greg Hunter on USAWatchdog.com.

John Williams is founder of ShadowStats.com, which provides accurate economic data and forecasts, often exposing the baloney presented by our government and mainstream news media.

Here is his statement quoted from a post dated today May 10 2015:

“I think you are going to have a crash here somewhere along the line that is going to be of a magnitude that will be remembered for decades. . . . I am still looking for a trigger of heavy selling of the dollar and a massive decline in the dollar, a panic decline in the dollar.  That could be a trigger for a stock market crash.  Any number of factors can do it.  You are not going to have much warning when it does come. The panic moves are almost impossible to time because of their nature, but the fundamentals are there.”

Does that sound familiar or what? For anyone who has been following this blog it should sound very familiar, like something they already heard because it is exactly what I called the Season Two crash of the dollar and the stock market, which I shared in my recent post: “Welcome to Season Two: The Decline of the Dollar Has Arrived.” He even said we would not have much warning when it does come, which is I also stated. He also said the economic data reveals fundamentals for this event are there.

With the coming drop in the value of the dollar, Williams sees our economy entering into a time of hyper-inflation. That is a confirmation of my previous post: “Prophetic Dream: Prices Going Up by the Light of the Blood Moon.” In that post, blogger Sarah Beveridge saw a loaf of bread selling for $15.99.

John Williams also stated he believes Fed Chairman Janet Yellen was sending out a warning last week when she said stock prices are “quite high” and warned of “potential danger” in the bond market. He explained,

“I thinks she was sending out a warning. What she did was deliberate. . . . I think she wanted to be in the position that if the stock market crashes, she could say, see I was warning you. I think you are going to have a crash here somewhere along the line that is going to be of a magnitude that will be remembered for decades.”

The magnitude of what is coming must be very large for Williams to say it will be remembered for decades. An event that big will make big news when it happens, but the first site to report it was Z3news.com.

Greg Hunter’s 23-minute interview with John Williams is shown below.

Look for October 1 as the point where the US dollar crashes. This is when the IMF incorporates the Chinese Yuan Renminbi with special rights in a basket of currencies including the dollar. Addition of the Yuan would most likely dilute the value of the dollar with respect to other currencies and the new IMF drawing rights value. This could become the new world currency. Also, this could be the time to have exposure in the FXF ETF. Also expect metals to pop with respect to the dollar. Not a prophecy just market logic.

Can anyone recommend a good company to use for buying and storing silver in Singapore via the internet?

Hindsight being 20/20, Bullion Direct has defrauded its customers & is bankrupt. One estimate I saw says there’s about $700k worth of precious metals in their vaults instead of the $20 million that was allegedly there. Tulving also went belly up a year or so ago.

If you store metals with a custodian it’s at risk.

Hi James
I am somewhat bemused by the advocating of storing pm’s overseas in such places as Singapore. I dont advise against it but I wonder that if the US closes its borders to US citizens (I am Australian) then how do you hope to retrieve it – unless of course one is about to leave the US? However this is not feasable for most.
Imho it would be better to bury it somewhere.
Regarding that $600 threshold, Australia has something similar and over a certain amount one must provide ID (legislation was introduced with a $1000 figure however atm one can buy up to $5000 without ID at sources outside of the Govt Mint), however as I currently understand it this is not a requirement yet in the US.

The one I looked at in Singapore offers to convert the metals into any currency you want and transfer the funds to any bank you want at any time. The idea of holding all the metals inside the U.S. also presents challenges of getting confiscated, getting stolen, getting burned during coming military invasions, and getting left behind if we have to flee the country. The U.S. Borders remain open for citizens to leave at least for now.

I use them and they have a Singapore facility

Hey James, hope you’re having a great week thus far! I’ve been doing some research into the physical investment of gold/silver because I do plan to go ahead and jump into that very very soon. I think it’ll be a great hedge against our paper currency which is certainly going to crash and burn in the near future. Tonight, I found out something very interesting with regard to the purchase of precious metals (as it relates to government reporting). I consider this information to be just as important as the banking information that people should know about while trying to take relatively significant amounts out of their bank accounts. And, since only about 1 in 100 people in this country apparently invest in physical gold/silver I’m betting many people don’t know about what I’m about to say. I certainly had no idea about it myself ’til just now. Believe it or not, back in 2012 the government signed into law a provision in the Patient Protection and Affordable Care Act (of all things) that relates to this very subject matter. If a business sells $600 or more of precious metals to a buyer they must fill out paperwork (including information on the buyer) and submit it to the government. $600 isn’t a very high threshold when you think about the price of gold/ounce these days. Even when it comes to silver, that’s about what…. 30 Silver Eagles? Personally, I don’t think it’s any of the government’s business to know what, if any, amount of gold/silver I have on hand. In finding this out, as I start buying silver (and maybe even gold) over the coming weeks, I’ll definitely be keeping the $600 threshold in mind and not going over it accordingly. That’s for sure. Anyway, hopefully others will find this… Read more »

That is very interesting. I had not heard that before. Another option could be buying from an overseas storage facility. I am looking at one in Singapore because the Lord told Bobby Conner Singapore will replace New York City as the world’s financial capital. I don’t recommend having it stored in the U.S. or in many other countries, but for now I feel good about Singapore.

Excellent interview with John Williams. I am very glad to see credentialed economists like him speaking out. It’s amazing to me how many people I meet that I guess think I’m stupid for calling out the stupidity of the market right now. To them, it’s all puppy dogs and rainbows and the party will never end. And so rather than argue with them I’ve started pointing them to ‘smart’ people. I mean honestly… as a Joe Blow how can you argue with a credentialed economist? Only a fool would consider it. I don’t really care whether people believe what I say or whether they believe the ‘smart’ person beside me that says the same thing. I just simply want them to get the message and heed the warning. The party is over. The gig is up. The music is about to stop. Whatever it takes to get them to arrive at that conclusion. The numbers don’t lie….